See all that? That’s just a few of the wide receivers that I should be starting over my first round fantasy draft pick. Just a sampling of the other thirty two more productive options out there. Five are actually on the waver wire right now. I’m 2-2, and my fantasy “stud” can’t even hack a double digit point a week average? Do I honestly have to have a sit down with Eli, before tonight’s crucial matchup?

If I see one more play action pass where Eli doesn’t have OBJ’s route marked option A in his peripheral vision AT ALL TIMES, I’m going to cut Eli from my fantasy team. I’ve had it. The fantasy season is already a third of the way done, and I don’t have a single score.

Luck starts until Romo’s return. That’s it. Eli Manning is in a Swami Squad Career Match tonight, and he’s getting same day notice about it, which doesn’t give him much time to emotionally digest such a challenge before one of the toughest teams on their season schedule. He’s just gonna have to suck it up, and deal with it.

Think like Costanza. Does the 2nd half look too easy? Is the spread of the 2nd Half close to the spread for the game? Does the halftime point total exceed the OVER/UNDER for the 2nd Half? Does taking the 2nd Half over seem too safe, and a FLOP is likely to happen?

Mess around with it. Take a 2nd Half Flip or a Total Points Flop straight bet. Find the one that you see switching to the opposite outcome of the 1st Half and take it. That’s all you have to do this week. 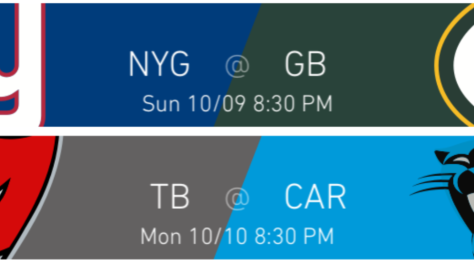 FANTASY OPPONENTS:
A. RODGERS VS. NYG

It’s off the charts. I’m probably going to need OBJ to hold Rodgers in relative fantasy check to have a shot to win this week, so I couldn’t be more in on an OBJ Primetime Coming Out Party. 140 yards and 2 touchdowns? Is that seriously asking too much, Eli? Just soak that in and get back to me.

Unless the public jumps on the PACKERS -300, we stick with a Green Bay win with a New York cover. We stick with the UNDER 48(-105) regardless of the side or total point trend movements.

If the people hit the SNF Side, then we ride with The House MNF Side no matter what. I’m really feeling an UNDER/UNDER this week. No overs this week. I forbid it. And we steer clear of a Side Combo of PUBLIC/PUBLIC…obviously.