As we continue our walk down memory lane, we arrive at Super Bowl XXI. I remember this one vividly. You see, my mother is a huge New York Giants fan. My Houston Texans weren’t even a blip on the radar 30 years ago, so I grew up watching the New York Giants.

That 1986 squad is one of my favorite teams ever assembled in any sport despite my general dislike for the franchise in general (which would begin a few years later when they replaced Simms with Hos and Parcells with Ray Handley). I watched every single game that season, aside from one: their Week 11 bout with the Minnesota Vikings. That week, my family had to go to a small stage production of The Manhattan Project in which my Uncle Jay was acting. My 11-year old self did what every growing NFL fan would do.

I snuck a transistor radio in my pocket, wired the headphones through my shirt and listened to the entirety of that 22-20 Giants victory.

I told you, I remember that season vividly. That’s why Super Bowl XXI is chock full of memories, even to the non-Giants fan.

Any time a New York team is involved in a championship, the amount of media glitz is through the roof. When the Giants were rolling into their first Super Bowl after a 49-3 beat down of the legendary 49ers (a game in which Jim Burt nearly ended Joe Montana‘s career) and a 17-0 victory over the rival Redskins in the NFC Championship, you can bet the hype was electric.

When John Elway was bringing his Broncos into The Rose Bowl off of The Drive against Cleveland, the story lines were oozing with drama.

The Giants were heavily favored in that Super Bowl, I believe it was nine or ten points if memory serves correctly. That was because the Broncos were John Elway. Sure, they had some nice players on defense like Tom Jackson, Karl Mecklenburg and Rulon Jones, but let’s face reality… Elway is one of the greatest quarterbacks of all time. The Hall of Famer willed the Broncos to this Super Bowl in the AFC Championship and he would have to have the game of his life to defeat the ’86 Giants defense.

That’s why it’s so surprising that Phil Simms was the quarterback that had a day that has yet to be matched in the 29 years since.

This Giants team had both character and characters. I remember this entire roster up and down. Mark Bavaro is possibly my favorite football player ever (as my cousins and brother can attest to). Little Joe Morris — who was a Syracuse graduate — stood at 5-foot-7 and somehow tallied over 1,500 yard rushing in ’86 and had 36 total touchdowns between 1985 and 1986. Phil McConkey — the Navy helicopter pilot who the Giants gave a chance as a 27-year old rookie two years prior — had more enthusiasm than anyone on the squad, leading them out on the field waving his towel before the game. I loved Maurice Carthon from his days on the New Jersey Generals. And Simms was the presence in the back field that you lived and died with, through good and bad.

I was also always a huge fan of the backup quarterback, and liked Jeff Rutledge way more than any other Giants fan in history.  I remember how ecstatic I was when he rushed for two yards on that fake punt and became truly part of Giants lore.

Then there was that defense. If any defense could provide a fitting encore to the Monsters of the Midway the year before, it was that Giants squad. Lawrence Taylor took home every award that season — MVP, Defensive Player of the Year, Player of the Year — and was joined by Hall of Famer Harry Carson as well as big names like Leonard Marshall, Carl Banks, Jim Burt and George Martin.

The Giants came out of the first half down 10-9, and then the fun started. 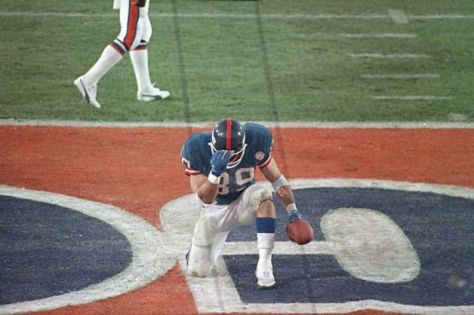 First came the touchdown to Mark Bavaro. The above image was so memorable it is etched in Giants fans memories. The big guy that literally put the offense (and opposing defenders) on his back for several games throughout the season got the go ahead touchdown, his first in Super Bowl play.

Then came the infamous flea flicker to Phil McConkey who would be tackled on the one-yard line. Little McConkey so wanted that touchdown, you remember his heart breaking when he was called down on the one. He flopped to the ground in grief, but Little Joe punched it in.

My favorite memory was McConkey finally getting in that end zone. It wasn’t the way it was planned, but his will and perseverance were the whole reason it happened. Simms had Bavaro in the back of the end zone, but the usually sure-handed tight end let it bounce off his hands as McConkey came flying into the picture and grabbed the ball out of the air. Suddenly the score was 33-9 and this game was over.

Simms would go on to complete 22 of 25 passes, an astounding 88-percent under the biggest pressure of his life and he handled it nearly flawlessly. It’s a record that still stands today.

The best part of the Super Bowl is that Gary Kubiak — who replaced Elway for the final minutes — would end the game being sacked. Little did my 11-year old self know but that would become the second best sack of Kubiak’s career. The other was when my Texans finally sacked him and handed the team over to OB.

But the Giants legacy of that Super Bowl wasn’t Simms record. It wasn’t their Big Blue Wrecking Crew legendary defense. It wasn’t McConkey and Little Joe showing that no matter the odds stacked against you, you can always rise to the occasion.

No, the Giants legacy — despite being considered one of the greatest teams of all time — was the Gatorade Shower.

I remember laughing and getting excited watching Harry Carson do his thing. Bill Parcells rarely cracked a smile, and no matter the score he always looked mad. He didn’t care much for the celebration, so Carson, once the game was in hand, took off his jersey and adorned himself with an event security yellow jacket.

I remember it so well. John Madden and Pat Summerall followed Carson around as he snuck behind the players with the Gatorade bucket, providing commentary on the play by play until final Carson doused Parcells with Gatorade.

And the celebratory Gatorade Shower was born.

Several minutes later, Super Bowl MVP Phil Simms was asked where he was going. His reply was simple, almost childlike and would set a precedent every Super Bowl MVP would follow.

You want iconic, folks, I give you the 1986 New York Giants.

Be sure to check out the whole Road to Super Bowl 50 series: