As I have said, I have known the Sportsbook Jesus since 1994. He is one of the most creative minds I know, which means over the years, we have butted heads on a few things. Take yesterday for example.

The Wayniac: Dude, why does it take you 3,000 words to tell people who to pick?

TW: You’re a pain in my ass is what you are.

SBJ: Look, you can go to any site and read about three free picks. What I’m doing here is teaching a philosophy. What happens on Saturday when they want to bet on college football? What happens when they want action on the other 10 or 12 games I don’t tell them about? Now, they know how to pick on their own.

TW: Dude, we went to college together. We sucked at philosophy.

SBJ: This is different.

SBJ: Because… well… so, you’re saying be less wordy?

TW: Welcome to The Nation.

“Everyone who recommended the Broncos/Lions OVER 44.5, put both hands above your head.  Raise your hands.  PUT ‘EM UP!  You people represent the 82% of our students who just failed our practice exam!  82%!  But that is not their failure!  I don’t blame them!  The failure is yours!  That’s right, yours!” -Principal Joe Louis Clark

My sincerest apologies.  I won’t let you students down again like that.  Let’s move on from last weeks bad beat, and stick to our core fundamentals.  I’ll never recommend an over that climbs above 80% again.  I promise.  I should have been more cautious, and seen that late money coming in, as it did.  I don’t want to receive another guilt trip tongue-lashing like that ever again.  Brutal. 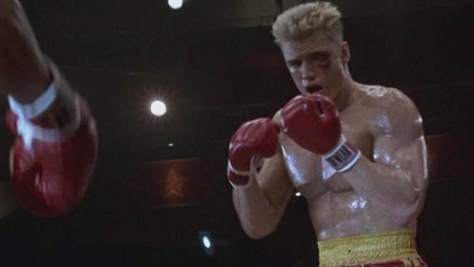 Well, look at you, public?  Go on wit ya bad self.  Alright.  Nice work this week.  Only means you’re gettin’ your rear handed to you today, but well done.  Seriously, you really took it to the books, and kept your balance during the 4pm action.  Primetime, as well.  Impressive. 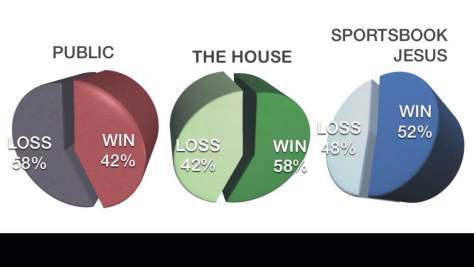 Before I get into this weeks analysis, I have to address something that baffles me of late.  Can we quickly discuss this identical twins theme that has dominated the television advertising market recently?

The DirecTV “Don’t be like this me” campaign.  Seinfeld’s Puddy in the National Car Rental ads.  Yeah, that’s right.  Lowe’s in the mix with a “Football me” bit.  Plus, we have that guy who’s always playing Seth Rogen’s sidekick in a Scion commercial.  You know who I’m talkin’ about, right?  He was Anne Hathaway’s sidekick when she hosted the Oscars a while back.  He did a fantastic DeNiro impression in “Neighbors”.  If you saw him, you’d know who I mean.  Anyway, whatever his name is…that guy is in a twins ad too.  He plays a sidekick to himself in this one.  At least, it’s not unoriginal, right?

Maybe one advertising firm was hired by all four of these companies to create their campaigns, and each client had no idea that their ad team was completely mailing it in.  Just regurgitating the same idea to all four of them.  Does anyone get this obsession with twins of late?  I sure don’t.

I wonder what triggered this binge of twin themed adverts?  It has to be paying tribute to some truly groundbreaking and magical twins themed project, which had some massive cultural impact that I’m unaware of, right?  Hmmm.  Can’t get a pulse on it for some reason.  Something truly genius in terms of creativity, I imagine, and I just missed the boat on it.  Apparently, I’m not as tuned in to pop culture these days.

The good news is, I’m the only Sportsbook Jesus you need. Don’t accept any duplicates. 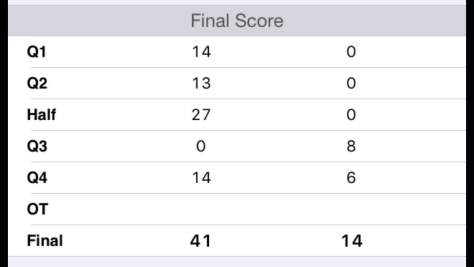 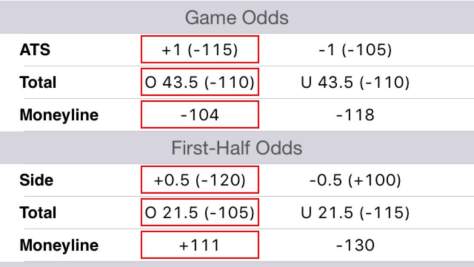 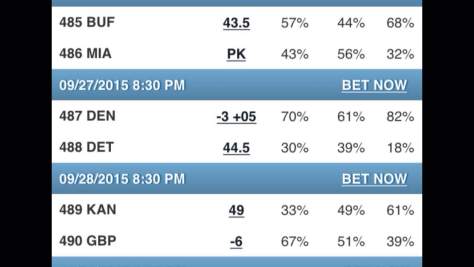 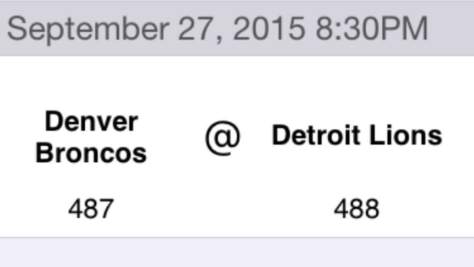 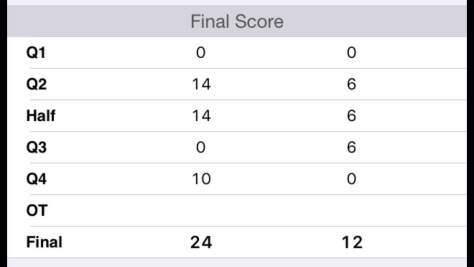 To start, did anyone pick up on my cryptic extra credit assignment?  BILLS PK with the OVER 43.5? Anyone?

No?  Not Trick Daddy fans?  That’s a shame.  Thought I served that up on a silver platter for ya.  Oh, well.  I do those from time to time to see who’s really paying attention.

I really wish you could have seen me during that Monday nighter.  I have to admit I was feeling pretty confident in my HDC, right up until the moment Quin picked Manning at the start of the 2nd quarter.  I suddenly felt lightheaded and weak in the knees.  I collapsed on the couch like Obi Wan in the Falcon.

“I felt a great disturbance in the over.  As if 82% of the public suddenly cried out in terror, and were suddenly silenced. I fear something terrible has happened.”

Unless another House Special was in the works, this Lions Moneyline was in serious trouble.

The Broncos TD in the final seconds of the first half was a glimmer of fleeting hope.  20 points at half meant I only needed 3 TDs(w/ extra points) and 2 FGs to hit the over.  Plus, the Lions were only 1 TD and a 2 point conversion away from tying it up.  I was technically in this thing, but it just didn’t feel right.

At halftime, I wanted to storm into the Detroit locker room at Ford Field, like Principal Clark during his first staff meeting.  Kind of like a “Stafford Meeting”.  Staff Ford Meeting? Nothing?  Anyway, I was ready to rip the heads off of every offensive lineman in there.

“Your quarterback can’t even get time to pass a basic 5 yard out!  THAT MEANS HE CAN HARDLY BREATHE!!!”

I was livid and probably would have added roughly two dozen f-bombs to that rant.  My blood pressure must have been off the charts.  Honestly, can’t remember the last time an offensive line set me off like that.

By the time the Lions failed their 2nd half two point attempt, I had abandoned all hope on the Lions Moneyline coming in. Down by two, this was shaping up to be a LIONS +3 at best.

Then with just over ten minutes left, just as I’m beginning to rekindle my belief in this Lions Moneyline, with Detroit at their absolute peak of offensive momentum…the drive stalled out, like a banana in the tailpipe, on that Stafford fumble.  Livid, I say.  Such a cruel tease.  I felt as if all 70% of the public fired me through a window of The House, like Axel Foley.

So, we had a PFC instead of the HDC.  I had it backwards.  That’s the risk with a cross.  If you hit it right, you just won yourself a two team parlay.  If you don’t, then you missed on both of them.  It’s a tightrope, but when it comes in there is nothing more satisfying in sports betting…except a 7-teamer.

Actually, I hit a 7-teamer once, which happened to me betting baseball the night I went to see “Batman Begins”.  Between Christopher Nolan’s resurrection of the Batman franchise and hitting a 7 teamer, it’s easily the greatest night of my entire life.

I didn’t even know I hit it, until after the 11pm showing.  Imagine the tidal wave of euphoric emotions with which I was immersed after just having seen that masterpiece.  Then, I turn on my phone to find a $10 8-teamer pushed on 1 total points wager, but hit on seven of the rest paying out $200?  I seriously think that was an overdose of endorphins on that magical night.  Exactly what I imagine heroine to feel like.

Really, Vegas?  Monday PFP?  Last class, I flat out guarantee no people’s picks in primetime, and you didn’t even wait a week to immediately spite that lesson.  It’s like that, huh?

Ok.  Alright.  I’m takin’ the opposite of all your side pickin’.  Huh?  You think you can do this?…VEGAS!  YOU THINK YOU CAN DO THIS TO ME?!!  YOU PUBLIC SUCKAS WILL BE PLAYIN’ FINALS-BALL IN CLEVELAND ONE DAY!!…WHEN I GET FINISHED WITH YOU!  SHOE PROGRAM, VEGAS!  23 HAS IT LOCKED DOWN!!  LEBRON’S THE MAN UP IN THIS PIECE!!  YOU’LL NEVER SEE A PLAYOFF PFP…WHO THE HELL YOU THINK YOU BETTIN’ WITH?!  I’M THE SPORTSBOOK JESUS!! I RUN PICKS HERE!!  YOU JUST CLICK HERE!!”

“YEAH, THAT’S RIGHT!  YOU BETTA WALK AWAY! GO ON WALK AWAY, CUZ I’M GONNA EARN THIS MONDAY UNDER NOW!” 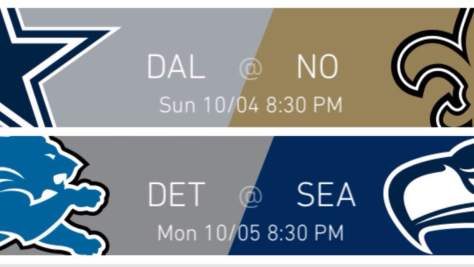 After a 1-5 primetime week on top of getting trampled by the people overall 16-32, I see Vegas pulling out the rake today a bit.  I roll with them this week on both side bets.  Chalk it up to general principle.  It’s just that simple.

No game analysis needed this week.  Once again, I recommend picking your spots with the house.  No Moneyline…no parlays.  Just side or total point straight bets.  I know.  Odds are that strategy hurt you last week, but expect that to happen every now and again.  Stick to the golden rule.  The house always wins.  Think big picture as more betting steadily increases in these trend numbers all to way up until Super Bowl 50. 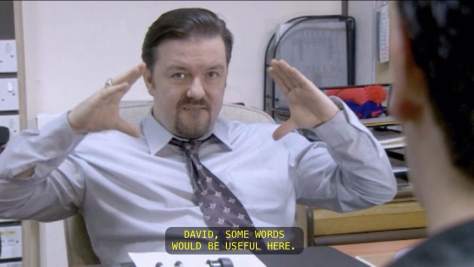 So, that’s this weeks assignment.  Find a primetime house bet on side or total points…plus, your usual terms list assignment.  If you’re feeling feisty, then figure out the overall records(don’t forget TNF) for the public and house going into the primetime action.  Who leads the week?  The people or Vegas?  See how primetime works out.  Not mandatory.  Extra credit.  Just recognizing the game outcomes by their terms is mandatory at this point.  Know your crosses, people.  Wax on…you missed a spot.

**Anytime I list the favorite’s Moneyline instead of the side, I’m basically saying the dog covers in a loss to the favorite.  SEAHAWKS -481 is essentially LIONS +9.5(-105) with the UNDER 43.  Got all that?  Class dismissed.  Good luck. 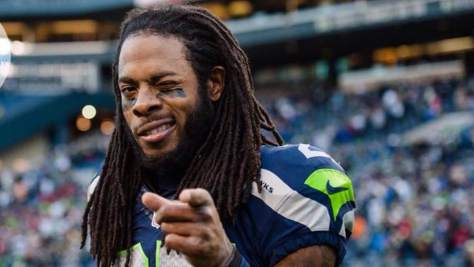 See ya next Sunday.