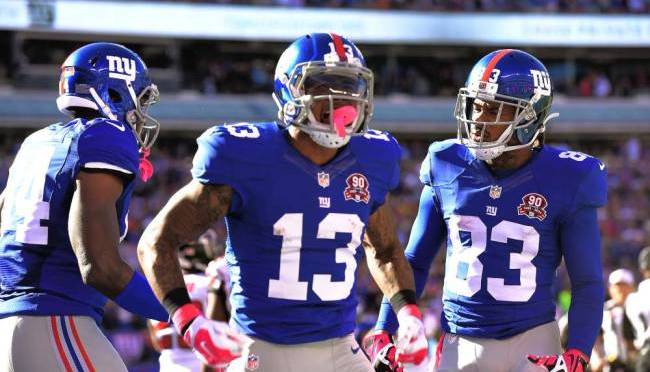 Week 11. It is a pretty big week for most people, but for me it’s a bit different. You see, in my BFFL, acclaimed member of The Thread, Kid Robot thought it would be an interesting idea to have my fiancé join his fantasy team. Last year was her first year doing fantasy in her own league and she is pretty darn stout. She asked for my tutelage prior to her 2013 draft and learned the rest on her own. Last year, she made the playoffs. This year, in her FFFL, she is in first place. This week I play her. Win or lose, she is one of the biggest Patriots fans there is and I have Tom Brady and Shane Vereen going against her Sunday night. I know that is tearing her up inside.

Last week, we were a few experts short because of busy weeks. Ted Reed was really busy in particular. I want to give a huge shout out and big congratulations to the newest dad on the Wayniac Nation staff. Congrats, Ted, and welcome back. You only have so many leaves of absence during the fantasy football season.

The experts that were here knocked it out of the park. Fee hit on everything. Justin Forsett went off for 112 yards and two touchdowns, Kelvin Benjamin went for 70 yards and two touchdowns and Matt Ryan had a decent enough day. His sit, Ryan Tannehill, had a whopping 10 points. J.D. was right about Mychal Rivera and his 20-point performance, although he missed on Jeremy Hill who fell back to reality with a 6 point day. He told you to sit Odell Beckham, Jr. who somehow performed well against the Seahawks, but told you not to be duped into starting Bobby Rainey against a weak Falcons defense because Charles Sims was healthy and would steal carries. Sims did just that, with two more carries and 9 more yards. Me? I definitely missed telling you to start that soulless ginger Andy Dalton, but Denard Robinson (20 points), Mike Evans (32 points) and the Packers defense (17-20 points depending upon format) cleared my name. Sitting Jay Cutler and Vernon Davis and his huge 8-yard catch in a week short on tight ends and quarterbacks hopefully helped you as well.

This week, aside from the Dallas Cowboys offensive stars, there isn’t too many relevant people on a bye. Of course, if you are starting any Jets or Jaguars on a regular basis, you need way more help than my experts can give you anyway. But we will certainly do our best!

Starts of the Week:
Colin Kaepernick against the Giants. The Giants are terrible against mobile QBs. Did you watch Russell Wilson outrush the entire Giants’ backfield last week? Alfred Morris is a safe start against Tampa, as is DeSean Jackson. The Bucs let S-Jax run for 81 yards, which was probably his season output up to that point, and a touchdown. Who am I kidding? Every Redskin is a solid start against Tampa. It sucks to be a Giants’ fan.
Sits of the Week:
Michael Floyd has had a tough sophomore season and it only gets worse with Drew Stanton taking over against the number one defense in football. Speaking of new quarterbacks, Andre Johnson is a sit this week. Ryan Mallett‘s first start comes against a pretty good secondary and Joe Hayden will be all over Andre. The 49ers are going to have a field day against Eli Manning, so sit him as well.

Ted Reed
Starts of the Week:
RGIII has been waiting for his breakout opportunity and he has it against the Bucs. Pierre Garcon and D Jax should be open all day and when they aren’t Niles Paul and Jordan Reed will be. Anquan Boldin is clearly Kaepernick’s favorite target, so you can’t start him with confidence against a weak Giants secondary.
Sits of the Week:
Ronnie Hillman gets hurt and Montee Ball gets healthy. Still, Ball didn’t look good before his injury and there is no reason to expect him to look good this week, especially after CJ Anderson‘s performance. Rueben Randle stinks and is losing out to Beckham more and more each week.

Dunton
Starts of the Week:
Welcome to the must-start club Odell Beckham, Jr. It’s a small window, but in five games Beckham has thrust himself into fantasy stardom. Beckham has seen 20 targets over the last two weeks and even against the Seahawks vaunted defense, he hauled in 7 receptions for 108 yards. Those numbers shouldn’t change when the 49ers travel cross country to MetLife Stadium.
Sit of the Week:
LeSean McCoy was a virtual lock to go one or two overall in all drafts in August. He has been one of the biggest disappointments in recent fantasy history. This week the Eagles head to Green Bay where a shootout is imminent. That may leave Shady in the dust and open the door for a big Darren Sproles day as the RB who makes a difference in this game.

J.D.
Start of the Week: Frank Gore, RB
It looks like the Niners are committed to Gore again and the Giants run defense stinks. I’ve been afraid to start him most of the year with the emergence of Carlos Hyde, but you can start him with confidence this week.
Sits of the Week: Larry Fitzgerald & Andre Johnson
These 2 physical freaks share a lot in common. They were the 2 top receivers from the 2009 fantasy draft (Sidenote: Terrell Owens was ranked #10 WR in 2009 preseason by ESPN), they are now in the decline of their career, and they both have new QB’s at the helm this week. Fitz has seen his productions increase with Carson Palmer in recent weeks and will be sad to see Drew Stanton back under center. Andre Johnson will be sad to see Joe Hayden all day. Start one of the rookie studs of Martavis Bryant, Mike Evans or Odell Beckham instead.

The Wayniac
Starts of the Week:
QB: Philip Rivers. He probably left a bad taste in your mouth after a negative point performance before his bye, and if you drafted Rivers, you probably drafted a pretty stout backup QB as well. Don’t be fooled. Branden Oliver forgot how to run and the Miami defense was able to hone in on Rivers. He is going to torch a Raiders defense that has allowed a combined 101 QB Rating against them this season.
RB: Mark Ingram. Finally, the Saints seem to have an RB they can rely upon and you can, too. He has three straight 100-yard performances and going against a Bengals defense that has allowed Trent Richardson and Terrance West to have solid games against them as of late.
WR:Roddy White. Did you see Mark Sanchez look like an MVP against this same Panthers defense? Julio Jones is clearly the best player on the Falcons, but White has been remarkably reliable underneath and in the end zone. He’ll probably score again this week.
TE: Dwayne Allen. Allen has scored a touchdown in three consecutive weeks and six out of his last seven. He has clearly established himself as a safety blanket for Andrew Luck. Look for that to continue in what seems to be heading for a shoot out.
Defense: Packers. They are a highly opportunistic defense and you can bet they will be looking to take advantage of Mark Sanchez… and they will.

Sits of the Week:
QB: Mark Sanchez. I discussed the problem with Sanchez earlier this week in my Games of the Week piece (you can read it HERE). Sanchez has looked sharp but he has gone up against two horrendous, swiss-cheese secondaries. His accuracy has been terrible and that could haunt him against a defense that will be looking to take him out of the game.
RB: Ryan Mathews. The Raiders defense has allowed 11 rushing touchdowns and the third most fantasy points to RBs this season. Tempting, isn’t it? Don’t forget, this is Ryan Mathews, people. He is coming off an injury (surprise, surprise) and will most likely be limited. Don’t be lured in by the Raiders defense.
WR: Marques Colston. I didn’t know there were still people that started Colston, but every Sunday morning I get a few texts and tweets asking me about him. Brandin Cooks is quickly becoming the secondary target behind Jimmy Graham and Mark Ingram helps the Saints control the clock more than ever before.
TE: Vernon Davis. Until he shows up in 2014, he will be my sit of the week as one of the biggest let downs this season.
Defense: Eagles. The Eagles score their points on turnovers, as they lead football in pick-sixes. Problem is, Aaron Rodgers doesn’t turn the ball over… ever. Eagles will get some sacks, and probably post decent numbers, just don’t expect their usual output.