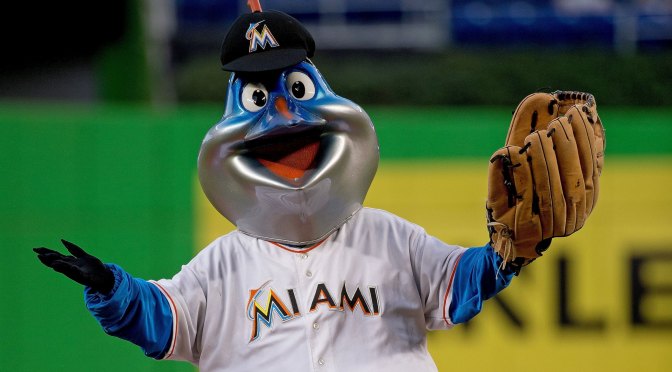 Two seasons ago, the young Miami Marlins surprised a lot of people when they went on a second half surge and finished 77-85. That led a lot of people — including yours truly — to think they would take an even bigger step forward in 2015.

Instead, they suffered a rash of injuries and several sophomore slumps that saw them take a step backwards. Sure, they finished in third place, but they lost six more games than 2014, and they barely edged out the Atlanta Braves and Philadelphia Phillies who were fielding Triple A squads by August.

So, can this Marlins team bounce back?

It’s a tough question when you think about it. The National League East has two of the best teams in the NL and easily the two worst. That leaves the Miami Marlins right dab in the middle of the NL East, and that gives them a chance.

The Washington Nationals are MLB’s biggest enigma. They have all of the talent in the world, but they simply can’t throw it together. The New York Mets are young, but now they are experienced and they should remain dangerous for some time. The Braves and the Phillies — with two of the better farm systems in baseball — are admittedly building for the future and are in the Houston Astros/ Chicago Cubs tear it down and start over mode, not caring about today, but building for a better tomorrow.

That leaves the Marlins as a big conundrum.

The rotation is infinitely better for one reason: Jose Fernandez is ready to pitch his first full season in two years. That makes this one of the better pitching staffs in baseball by his addition alone.

They lost Henderson Alvarez — who I was always a big fan of — but he was injured and likely not going to be ready until mid-season. They brought in Wei-Yin Chen who — albeit older than Alvarez — was also much more consistent.

Chen could have a tremendous season. He is battle tested in the high-scoring AL East, pitching in the home run friendly confines of Camden Yards, yet he hasn’t had an ERA over 3.54 in two full seasons. With so many AL pitchers finding sudden success in the NL — like Chen’s former team mate Jake Arrieta — Chen could be in store for a huge season, especially in the light hitting NL East.

Tom Koehler is the wild card here. He showed a lot of promise in that 2014 Marlins “breakout” campaign. He also started well last season, cruising along on that same level he pitched the season prior. However, as injuries built up and Koehler moved to the top of the rotation he fell apart.

His second half stats were frightening (4-9, 4.84 ERA, 1.522 WHIP 44 walks and 92 hits allowed), but again, he wasn’t pitching in his comfort zone. To say someone is a middle of the rotation pitcher isn’t an insult, and Koehler proved that is what he is. The Marlins need him to step back into that three hole and look more like pre All Star Break Koehler than post All Star Break “ace” Koehler.

There hasn’t been any change in the bullpen, but that is ok. A.J. Ramos took over as closer in mid-May and handled his first season reasonably well, especially for someone who had never recorded a save in his career prior to May 13th of last season. There will always be bumps and bruises along the way when one transitions into the closer role. Like Koehler, Ramos had a rough second half, but when all was said and done, he finished the season with some very promising numbers (2.30 ERA, 1.009 WHIP, 87 strikeouts/26 walks in 70.1 innings).

If Ramos should fail, keep an eye on Carter Capps. Just 24, he has improved every season in a bullpen role, and when it comes to being a closer, you have to love that 58 strikeout to seven walk ratio over 31 innings.

Much like the rotation, the lineup becomes instantly better with the return of Giancarlo Stanton. It makes their outfield stronger and Ichiro Suzuki won’t need to be an every day player.

At the beginning of the season, it looked like Christian Yelich‘s 2014 breakout campaign was a fluke. He came out of the gates very slow, but a tremendous second half showed that — at just 24-years old — he is one of the exciting young outfielders in the game. He slashed an unbelievable .342/.392/.473 in the second half of the season.

They really need a huge bounce back from Marcell Ozuna. He blasted 23 home runs in his first full campaign and wound up with 10 last season, a number certainly influenced by less playing time and not having Stanton in the lineup. Should he bounce back, the Marlins sport an outfield that is all under the age of 25, and that is exciting.

Justin Bour looks like a legit first baseman, and Dee Gordon had one of the best comeback seasons in recent memory. They lead an infield that can not only produce at the plate, but play soundly in the field. J.T. Realmuto was somewhat rushed into a full time role last season, but he proved able both at the plate and behind it. He still has a ways to go defensively, but there is no denying that it was a promising start to a young career.

Don Mattingly and Barry Bonds. What else needs to be said? The Marlins should be vastly improved offensively, that is for sure.

They both have something to prove and that’s what makes this a make or break season for them. There is no denying that Mattingly has his doubters, and rightfully so. He struggled at the helms of baseball’s most expensive team and they never even made a World Series with all of that talent. A lot of the blame fell on the shoulders of Mattingly, and some of it was deserved.

Now he has a chance to take a young team, eager to win and show what he can do. These aren’t high priced super stars, this is a team full of youth that he can mold, and make an impression upon. He will however, have to manage this team way more than the Dodgers, so it will truly be a test.

Bonds is trying to get back into the good graces of MLB. While he may never be able to do so, this is certainly a starting point for those who are willing to listen. If Bonds can take these youngsters like Stanton, Bour, Yelich and Ozuna to the next level offensively — more importantly, the right way (you know what I’m talking about, Barry) — he may just persuade those last voters he needs to gain entry to the Hall.

The NL has suddenly become a very tough league. The NL Central is stacked and not going anywhere. The NL West is also tough. The Dodgers are still good, but may have taken a small step backwards. The Diamondbacks have improved greatly for the now while giving up on their future. And it is an even numbered year, so that means the Giants and their new pitching staff have to be considered contenders.

The NL East, well, as always, it’s a total crapshoot. I see no reason why the Mets would be a fluke and they should easily hover around the 90-win mark. The Nats, I simply don’t believe in them. I think they are highly overrated, but that’s exactly when a team like that jumps up and reels off a 100-win season.

Can they Marlins improve by 15 games to become wild card contenders in just one season under a new regime? I’m not so sure, but I do think this team finishes .500. If they can hover around that mark all season and maybe become buyers instead of sellers at the deadline, it isn’t ridiculous to think this team can make an exciting run.

3 thoughts on “Can the Miami Marlins make the MLB playoffs?”