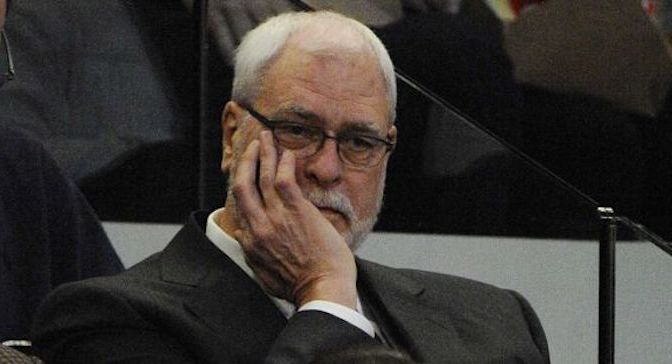 It’s funny. Just yesterday, Wayniac Nation regular Benny Smalls asked why I am writing so many baseball pieces already when the NBA is still in session.

My response was that you can write the same story every night in the NBA. Either the Golden State Warriors or San Antonio Spurs are going to win it all. Steph Curry likely did something that made you have to pick your jaw up off the floor. LeBron James probably cried about something and got his way, but it doesn’t matter because he is simply destined to lose in the NBA Finals… again. Oh and Kobe Bryant may or may not play.

But that’s why you have to love the New York Knickerbockers.

It’s amazing. The Knicks have been absolutely horrendous for the past 15 years. They have had two winning records since 2001. During that same exact stretch the San Antonio Spurs have won 50 or more games in EVERY season in the process of adding four more rings to Pop’s and Tim Duncan‘s hand.

Who is in the spotlight more?

15 years ago, when the New Jersey Nets were rolling to back-to-back NBA Finals, their attendance was so poor that they began the search for a new arena. They figured if two consecutive championship runs couldn’t turn their attendance around, nothing would.

The Knicks — who won a combined 67 games over those same two seasons — had Madison Square Garden overflowing nightly.

Because the New York Knicks are a media machine. Think about it. The four biggest stories from the past two seasons have nothing to do with the players or performance of the team. Phil Jackson became president. Derek Fisher got in a fight with a player because he was sleeping with his ex-wife. Fisher got fired. And now this:

New interim head coach Kurt Rambis made the cover of the Daily News. Why you ask? Rambis, from his Twitter account, liked a pornographic picture.

Was it him and some player’s ex-wife?

It was a naughty picture and Rambis pressed the little heart button and liked it.

And it is national headlines.

The Knicks — or at least the New York media surrounding the New York Knicks — are the masters of the non-story. Take a close look at that Daily News cover from this morning. What do you notice? You don’t notice a single mention of the fact that the Knicks got slammed for 12th time in the past 14 games, right? You don’t see that last night the Knicks lost by nearly 30 points to the division leader they need to beat to become relevant again, do you?

You don’t. You know why? Because Rambis was playing on Twitter.

Are you kidding me? This is a story. I promise you with the activity of athletes on the internet and social media, this is not the first or last time it will happen. It’s not even that big a deal. A grown man liked a sexy picture. Where in his contract does it say he isn’t allowed?

The article by Frank Isola then goes on to argue that this is a reflection of Jackson’s ability as president by the decisions he has made at the head coaching position. This is laughable.

The Knicks are so bad that this is news. It continues to be news in a time when they have the second most overrated “superstar” (Blake Griffin, I’m looking at you) in the NBA sucking up salary and the ability to move forward (sorry Melo, I love you for what you did in Cuse, but there is no denying that the Knicks have been worse off since you came to NYC).

The roster is horrendous, and aside from Melo (who is fun to watch) and Kristaps Porzingis (who is even more fun to watch) there is nothing to indicate that there is hope in the near future.

Aside from the fact that the Zen Master went out and found Porzingis who everyone questioned him about drafting. Oh, and aside from the fact that he held on to all of his draft picks at the trade deadline instead of taking someone’s high-priced trash off their hands for one of his few good pieces. Oh yea, he also shed millions in wasted money from the Knicks roster since he took over.

And that’s why I am already writing about baseball.