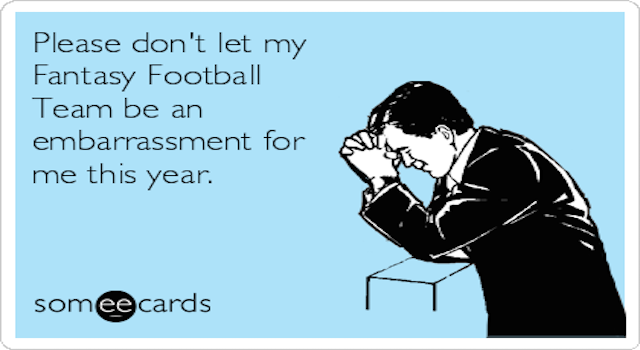 Last week was a fantasy football… well, fantasy: high octane action and tons of points. My Fighting Blue Hose had four players combine to score more points than EIGHT other teams in my league. When Rishad Matthews is dropping 30 points, it is a great week.

Not every week is going to be like that, however, and with byes starting and this crazy run of injuries to big time players, it only gets harder. Especially when the leagues best QB and TE are on a bye as well as an RB by committee in New England that does nothing but score TDs.

How’d we do last week? Several of my experts said that Donte Moncrief should be your start of the week, and he performed well, returning to the end zone and clearly establishing himself as Andrew Luck‘s number two weapon. If you listened to Fee and started Tyrod Taylor, you wound up in great shape, as he is becoming one of the more exciting fantasy QBs in the league.

Speaking of Fee, he also told you to sit Megatron and Golden Tate, as well as the Eagles, which aside from a breakout performance by Ryan Mathews, were pretty solid picks. Some of the experts lucked out as their sits of the week Drew Brees and DeMarco Murray didn’t even see the field.

Yours truly crushed it. Nearly 30 % of fantasy footballers are still starting Colin Kaepernick and I told you not to be fooled coming off of a huge week in garbage time against a soft Pittsburgh defense. He didn’t even throw for 100 yards, but he did throw two TDs… to the Cardinals defense. Cam Newton came through as my start of the week in a big way, as did my other starts of the week Le’Veon Bell and Amari Cooper. I did miss and tell you to sit Jason Witten, which proved to me that no matter how hurt this guy is you start him. He’s that good.

So who do we have lined up for you this week?

Starts of the Week:  Those looking for a backup QB to fill in for Brady, QB Derek Carr is a great play. He is going against a Bears defense that traded their best player in Jared Allen. I see Carr having a decent game (200+yards and 3 TD’s).

If you drafted CJ Anderson in first round like I did you are probably kicking yourself each week when you watch him gain a whopping 14 yards. If you plan on benching him, RB Ryan Mathews is a good play. It appears that DeMarco is still nursing this injury and Mathews was a decent sub last week against the Jets, and the Redskins defense doesn’t come close to the Jets.

Sits of the Week: Obviously I’m going to tell you to sit RB CJ Anderson. At this point until this guy cracks the 50 yard threshold he is on my bench. I still have faith in CJ later on this season as the Broncos figure this offense out but for now it’s wait and see. I want to see some consistency of touches and yards gained.

Fittingly, I also have RB Justin Forsett. Sit him, too. The exact same applies. Until this guy puts up more than 10 fantasy points don’t put him in your starting rotation. Need to see some results from a solid Tier 2 RB that is playing like a bye week replacement right now.

One additional sit for you, WR Alshon Jeffery. Yes I know he is injured but signs point towards him suiting up this weekend. He is catching passes from Jimmy Clausen. Enough said. Don’t be fooled by the fact that he may play. He still won’t be effective.

Starts of the Week: I like WR Steve Smith Sr. to have another big game against a pretty bad Steelers secondary. I would start RB Karlos Williams with or without Shady in the lineup. I also like CJ Anderson to finally get it going against the Vikings at home.

Start of the Week: TE Jason Witten– Brandon Weeden had all week to work with his receivers and all he could figure out was how to dump the ball to Lance Dunbar and Witten.  The Cowboys are going to move the ball this week vs. the Saints and Witten will get the majority of the looks. With Gronk on a bye, I expect Witten to put up the most points of any TE this week.

Sit of the Week: Any Redskins players (besides TE Jordan Reed)- I originally wanted to list just the running backs, but the rest of the team shouldn’t be considered either, besides Jordan Reed.  The rotation of Alfred Morris, Matt Jones, and Chris Thompson is as predictable as the Patriots backfield the last few years.  Stay away from any Redskins, besides Jordan Reed.  Oh, and Jordan Reed is the man… and should be started!

Starts of the Week: QB Derek Carr – I’m not ready to say Derek Carr has arrived in must start territory every week, but a week four matchup with a Bears team going through a firesale usually reserved for Major League Baseball puts Carr firmly in the top 10 this week.

TE Martellus Bennett – Some might be inclined to bench Bennett after a letdown week with Clausen under center. Even if Cutler isn’t back for this game, Bennett is a must start. Oakland has made Gary Barnidge, Crockett Gillmore, and Tyler Eifert look like Hall of Famers. In three games, Oakland has given up 20 receptions, 297 yards, and 5 TDs to TE. I expect Martellus Bennett to roam free in the middle of that defense.

Sits of the Week: RB Carlos Hyde – After one week most fantasy experts were ready to put Hyde into the top 12 fantasy RB conversation, but these last two weeks have shown why most feared Hyde before the season. The 49ers are bad, really bad. Playing from behind in most games will limit Hyde’s opportunities this year, especially this week against the potent Packers’ offense.

RB Joseph Randle – If you look at the stat line from last week, you see that Joseph Randle had a huge week against the Falcons. The truth is Randle had a great half. Randle started the game on fire, breaking off big runs and scoring early. Once Atlanta realized Brandon Weeden wasn’t planning on throwing it further than 5 yards, they clamped down on the Cowboys running game. I expect Rob Ryan to put 8 in the box to start this game, and Randle will struggle. 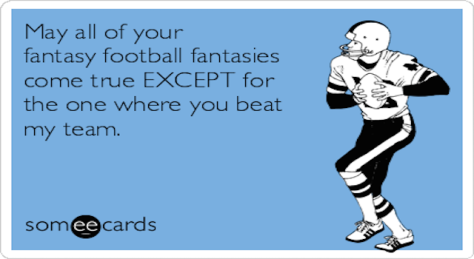 Starts of the Week: RB Devonta Freeman should still see the bulk of the carries even if Tevin Coleman makes a miraculous recovery. He could play big in the screen game against a tough Texans front seven. QB Cam Newton started the year as a backup for most teams, but he may have become a must start once again. Against a weak Tampa Bay defense, he should have a huge week making running and passing plays by himself.

Sits of the Week: I have to agree with Ted and say Stafford has to sit. He hasn’t done well and there is no way he improves on the road in Seattle. Also, RB Alfred Morris has to sit. As J.D. mentioned, he is part of a three-headed monster in Washington without any ability in the passing game. With the Skins being down so much, Morris will become invisible. The fact that he is stinking may drop him to third in line.

Starts of the Week:

QB: This week finds you with no Big Ben, probably no Cutler, no Brady, no Romo and possibly no Brees. That’s quite a few big names, but if you were lucky enough to stash Philip Rivers on your bench you are in good shape. He returns home to San Diego to face a Browns defense that has allowed a 6:1 TD:INT ratio and have allowed QBs to amass a 102.9 QB rating against them. Should be a great week for Rivers who dominates lesser defenses. Like Dunton and Saucy T, I also really like Derek Carr this week… but I am ready to declare him a must start until further notice.

RB: This has to be Jonathan Stewart‘s week, right? He faces a Bucs defense that let Alfred Blue go for 25 points last week. The Bucs are allowing 138 yards per game (third worst in the NFL) on the ground and have already allowed four rushing TDs. If Stewart can’t get it going against these guys, you need to bench him until further notice.

WR: The two worst defenses against WRs are actually squaring off this weekend. While Odell Beckham, Jr. is a no brainer, Percy Harvin may be a nice flex play this week. I know, The Wayniac is adamant about never starting Harvin, but he has been playing with an edge I haven’t seen since his early Vikings days. The Giants secondary is a mess and if Sammy Watkins is out, Harvin could get you 15 points on Sunday.

TE: Jimmy Graham regained must start status, Travis Kelce is a must start, and Jason Witten showed his moxie last week playing on two hurt ankles that he remains a must start. Who do you turn to with Rob Gronkowski on a bye this weekend?  Kyle Rudolph may be a nice play this week. The Broncos haven’t let up a TD to a TE, but they have let up some yards. Bridgewater has been struggling and I don’t think his speedy receivers will get much separation from that tough Broncos secondary. Look for an underneath TD to Rudolph.

Def: If you aren’t starting the Cardinals defense every week, you need bigger help than my experts can bring you. They have scored four TDs already this season. Nick Foles and the lackluster Rams offense are coming to town, prepare for a redbird feast.

QB: There are so many starting QBs off the field this week, I think some people may be tempted (or have no other choice) to start Teddy Bridgewater. He looks like he took a step backwards thus far in 2015 and the Broncos defense is not the right time to find your groove.

RB: I had the opportunity to draft Jeremy Hill in two of my three leagues this year, and I passed him over both times. Something just didn’t seem right to me, and thus far I see why. The Chiefs haven’t allowed an RB to eclipse 50 yards yet this season, and no RB has scored a TD against them. Giovani Bernard has been outperforming Hill all year, expect that to stay the same this week.

WR: Terrence Williams had no catches last week. I’m not so sure Brandon Weeden can reach him. The Cowboys leading receivers were check down specialists (Dunbar, Witten and Cole Beasley). You may be lured in by the weak Saints defense, but I think the Cowboys will stay conservative and run and check down all night long.

TE: Eric Ebron has had a very nice season, but we saw what this Seahawks defense can do with Kam Chancellor back in the fold against lesser teams. Despite claiming that his Lions are still elite, Ebron will struggle to find room this week.

Def: Rams. Carson Palmer is healthy, Larry Fitzgerald looks 22 again and the Rams are a different defense when they aren’t on the turf in St. Louis. Without an offense that can get this D off the field, Palmer could have yet another field day.

Any specific questions pertaining to your roster? Ask in the comments below and one of our experts will get back to you!