The Wayniac Nation fantasy football experts are really coming together. Last week, Dunton hit on his starts for you as Aaron Rodgers and Philip Rivers went bananas. Sure, they were easier picks, but he also told you to sit Tom Brady, who may be a sit every week now. Fee missed on Kirk Cousins, but he hit on sitting both Reggie Bush and Joique Bell who, like Brady, scored well under ten points. Ted Reed was on with Reggie Wayne as he dropped a season best 23 points. J.D. hit the nail on the head starting Matt Asiata who went off for 30 points, and his sit, Vincent Jackson, had three points until the final 30 seconds when he caught the game winning touchdown. Myself? I admit I swung and missed telling you to sit Eli Manning, but come on, the guy rushed for his first touchdown in a decade! If you started Big Ben and his 32 points like I said, you still did just fine. I was also right on starting Kelvin Benjamin, who is now a verified fantasy star, and Jason Witten, who wasn’t spectacular, but had his best game of the season to date. I also told you that if you had the gamble in you to go with Teddy Bridgewater. Coming off a 300-yard performance in his first game, I’d say I was right!

This week, only the Raiders and Dolphins are on bye, so your lineup should be pretty much in tact, aside from maybe Lamar Miller. There are some juicy match ups this week, and it is a pivotal week in fantasy. If you can get your team to its fourth or fifth win, you are cruising to a playoff lock. If you already have three or four losses, another one can end your season early. If you are sitting at .500, this is your week to start over and get going. 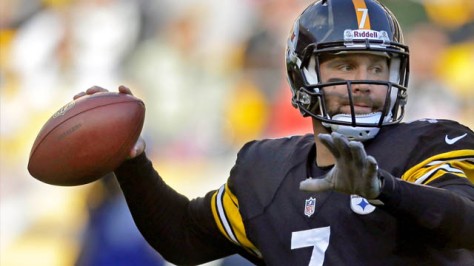 Fee:
Start of the Week: Ben Roethlisberger, QB.
Big Ben has been in the zone. Squaring off against Jacksonville should give him the opportunity to put up even bigger numbers than he did last week. I also like Rashad Jennings against a depleted Falcons defense that made Matt Asiata look like AP.
Sit of the Week: All Patriots until further notice.
Just do it. They don’t have a single intimidating wide receiver and their running game has been mediocre at best. Until Tom Brady finds his groove, which may not actually happen, there is no reason to start anyone on this team.

Dunton:
Start of the Week: Le’Veon Bell, RB.
Pencil him in for 150 total yards and two touchdowns. Bell looks more and more like an elite fantasy back each week and against Jacksonville that shouldn’t stop. You should probably start Antonio Brown as well. He is one of the best fantasy receivers right now because he can get you points in so many different ways, whether it is a run, a screen, or a long, exciting bomb. This is an angry Steelers team coming off of a terrible loss. They will dismantle the Jags.
Sit of the Week: Tom Brady, QB.
I got to agree with Fee here. The image of Brady holding his head in his hands on the sidelines last weekend defines the Patriots season. It isn’t going to get easier against a top Bengals’ defense who has been preparing two weeks for this bout.

Ted Reed:
Start of the Week: Bishop Sankey, RB.
I know, he hasn’t looked like a star yet, but he has improved every week. Even Ken Whisenhunt has seen an improvement in his footwork. The more faith his head coach has in him, the more he will touch the ball, especially with Shonn Greene being the guy he is competing with for touches. The Browns run defense is horrible, so look for Sankey to make a name for himself this weekend.
Sit of the Week: Cardinals defense. Peyton Manning is going to have a shootout in Denver this weekend.

J.D.:
Start of the Week: Andrew Hawkins, WR.
The 5’6″ little-known veteran is getting targets (33 in fact) which ties him with Dez Bryant and is one more than Brandon Marshall. The Browns are coming off a bye (making his numbers even more impressive) and are going to Nashville. Hawkins hasn’t seen the endzone in two years, but expect that to end this week despite the Titan’s decent pass defense. He’s the only consistent of the Browns offense full of uncertainty. I also like Allen Robinson as a sleeper this week. Why? Because I’m desperate for a flex and am starting him.
Sit of the Week: Alfred Morris, RB.
Morris is one of the few remaining one-dimensional backs left in the NFL and is facing the Legion of Boom on MNF. He’ll get plenty of carries, but I’d be surprised if he gets double-digits this week. The Redskins may not score at all if they are anything like we saw last Thursday.

The Wayniac:
Starts of the Week:
QB: Eli Manning – The Falcons are a mess. I went against him last week because Eli is a QB known for inconsistency, but maybe new OC Ben McAdoo has solved this. He has a solid core of receivers and a two-headed monster in the backfield to take the pressure off of him.

RB: LeSean McCoy – I know what you’re saying. Of course you start the consensus number one overall fantasy pick. The thing is, he has done nothing to prove that. He has run for 37 yards and 28 carries over the last TWO WEEKS and with the shaky back-up O-Line of the Eagles, he is no guarantee. If McCoy can’t get it going against the Rams 30th ranked run defense, we may have a serious problem.

WR: DeAndre Hopkins – He is quickly becoming Ryan Ftzpatrick’s favorite target. Hopkins has either scored a big touchdown or gone over 100 yards every week this season. That shouldn’t stop in Big D in a huge showdown for the Texans.

TE: Greg Olsen – That Bears defense did not look good against the Packers. Cam Newton is no Aaron Rodgers, but he loves targeting Olsen. He should be good for a score this week.

Defense: Detroit Lions – This is the number one defense in real football and they are playing against Kyle Orton at home. Any other questions?

QB: Colin Kaepernick – Tom Brady is the easy pick, but part of that is because of how the Chiefs made him look on Monday. They will do the same to the 49ers this weekend. Kaepernick’s one big touchdown last week was a dump of to Frank Gore that he took 50 yards. That can’t be counted on against a tougher Chiefs defense.

RB: Montee Ball – I hope I am wrong as I need to start him this week, but Montee Ball does not look like he is comfortable as a starting RB in the NFL just yet. Going against a stout Cardinals defense may not be the cure for that.

WR: Eddie Royal – He is the flavor of the week coming off back-to-back multi-touchdown games. Remember, he is the most picked up free agent this week for a reason. Royal has had big games in the past and then just disappears. Rivers looks great thus far, but he has quite a few weapons. I think Royal has a good game, but if you are starting him hoping for a third straight 30-point performance you may be disappointed.

TE: Travis Kelce – This dude, as Saucy T has named him, is Gronk 2.0. He is really good. This just isn’t his week. The 49ers aren’t going to let Alex Smith come to town and beat them. He was literally open all day long on Monday night. That won’t happen against the 49ers.

Defense: Daaaa Bears – These aren’t The Monster of the Midway. I don’t care if they are playing a Carolina Panthers team that literally has no running back, they are not ready to be fantasy relevant yet.