The NFL provided a hell of an opening weekend for football junkies out there. The Eagles, Dolphins and Falcons led inspired comebacks to claim victories, while the Bills rolled into Chicago and upset a team that many touted as a Super Bowl contender with an MVP candidate in Jay Cutler at the helms. The lowly Browns showed tremendous poise in a monstrous comeback that fell just short against the Steelers while the defending champs look like they have the moxie to be the first back-to-back Super Bowl winners since the Pats did it a decade ago.

Two of the biggest stories of the upcoming week have to do with off the field issues. I’ve already told you my thoughts on the Ray Rice issue (which you can see here if you missed it), so to see how this further unravels will be quite interesting. Elsewhere, the 32 player reps have yet again put off the vote about the hefty punishments from the league’s drug policy. Josh Gordon and Wes Welker anxiously await the results in hopes of returning to the field.

How do the boys of autumn follow up a weekend like that? It will be a tough act to follow, but there are some highly intriguing games on the slate for the coming week. The week kicks off Thursday night, when arch rivals square off as Ben Roethlisberger takes his Steelers to Baltimore in a match-up with Joe Flacco. It should set the tone for an action-packed weekend. 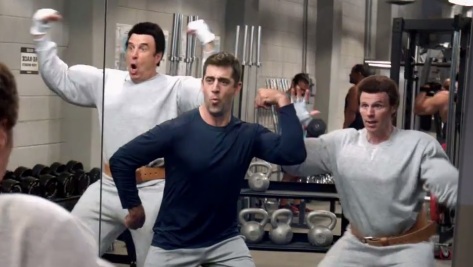 3. How does Aaron Rodgers recover?

Rodgers had a tough go against the Seahawks on opening night, but let’s be honest, most quarterbacks do. This is the same team that limited Peyton Manning to 280 yards and one touchdown after he averaged nearly 345 yards and four touchdowns a week for the whole season. Rodgers is now on his home turf against the New York Jets. There are hundreds of jokes to insert about the Jets at any given moment, but this is a team that improved its defense in the offseason and has Rex Ryan at the helms. Ryan may not know much when it comes to coaching a team, but he is a brilliant defensive wizard. This will be one of those games that Ryan forgets that there is an offense and special teams as he hones in on how to disrupt Rodgers. Right now the line is at 8.5. I think Rodgers comes out pissed off and rarin’ to go. That being said, I think Ryan will have the Jets hanging around for the first half. The Packers should cover this one and Rodgers should have that monster week we have been waiting for since his injury.

2. Is this the beginning of the end for Tom Brady?

There is no denying it, Pats fans. Tom Brady had a down year last season and this past Sunday in Miami he looked old. The Dolphins, who trailed 20-10 at the half, came roaring back scoring 23 unanswered points in the second half to win 33-20. It was the Pats first loss in the season opener since 2003. Something is afoul in New England.

The most alarming aspect of Brady’s poor performance this past Sunday was that he finally had all of his toys on the field together for the first time since 2012. Rob Gronkowski played, although limited, but so did Shane Vereen and Danny Amendola. Brady should have had a classic Tom Brady opener with all of those weapons at his disposal, but he couldn’t keep the Pats on the field in the second half.

This Sunday, they travel to Minnesota. The Vikings are fresh off a blowout victory as they had their own silence of the Rams in Week 1. They will look to keep the momentum rolling. I don’t care who they have at quarterback, Adrian Peterson and Cordarrelle Patterson are studly enough to keep the Vikings in games. If this game was at home, I can see Tom Brady geared in and ready to thrash the Vikings, however, on the road for a second week in a row, I can see the Vikings sneaking one by them.

The Falcons and Saints were the Wayniac Nation Game of the Week and man, did it live up to its billing. The Saints came flying out of the gate with their super charged offense to amass a 20-10 halftime lead. The Dirty Birds came roaring back in the third quarter scoring 14 unanswered points to set up the exciting fourth quarter. The Falcons and Saints exchanged punches until Matt Ryan led another one of his heroic comebacks and locked down the overtime victory 34-31.

Matty Ice has always been an elite quarterback in the confines of the Georgia Dome, however, the Falcons’ play on the road over the past few seasons have been their ultimate demise. Ryan is fresh off a career high and Falcon record 448 yard passing day. It is time to realize that no matter how good Matt Ryan continues to become it all hinges on Julio Jones. Last season, Ryan averaged 330 yards per game before Julio went down and finished the season at 282 yards per game. We already saw what he can do this season when the threat of Julio is on the field.

This is an enormous test for a Falcons team that had very high hopes last season. If they can jump out to a 2-0 start on the road against a legitimate playoff contender, it will erase a lot of doubts and prove last season was an injury-riddled fluke. The Bengals have one of the better defenses in the league and if Vontaze Burfict can sneak through concussion protocol, his presence makes them even stronger. This can be a huge statement game for the Falcons.

GAME OF THE WEEK: It seems rare that Monday Night Football has an exciting game to watch anymore, but this week is a doozy. The Philadelphia Eagles were embarrassed over the first half of last week’s opener against the lowly Jacksonville Jaguars. Nick Foles looked like a flash in the pan as he made three turnovers and was sacked three times. They quickly turned it around and trounced the Jags in the second half, 34-0. The Colts had the dubious honor of traveling to Denver and opening against the pissed off Super Bowl loser Broncos. They didn’t get the victory, but man Andrew Luck looked good. These are two high flying offenses with middle of the road defenses, so we should be in store for a heavy weight battle exchanging scoring blows back and forth. Hopefully LeSean McCoy plays better than he tips under the bright lights of prime time!

Survivor Pool Pick of the Week: If you listened to me last week, you are still in your pool. This week is a tough slate of games. Your safest two bets are the Packers at home against the Jets and the Seahawks on the road against the Chargers. If you insist on gambling and really like to take chances, I think the Titans at home against the Cowboys are an intriguing pick. The Titans upset the Chiefs in the very tough environs of Arrowhead Stadium last week and will be looking to put on a show for their home faithful against a Cowboys defense that has more holes in it than a Sopranos series finale.