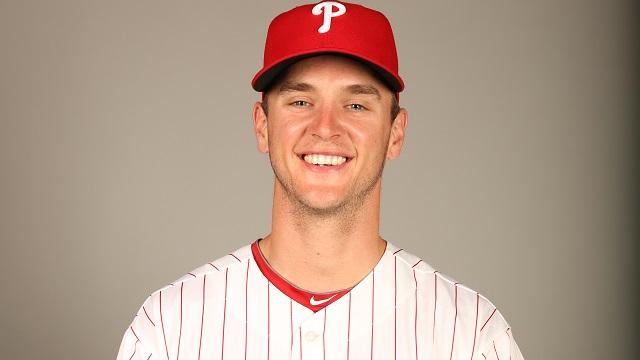 I met Sarah and Ashley Buchanan nearly ten years ago. We were working as servers at one of the busiest sports bars in Atlanta. We quickly became friends and have remained so over the years. Sarah has been a baseball junkie since I’ve known her. It was fun to see her get all worked up about the Braves. It was also fun to listen to her talk about her little brother.

I can honesty tell you that Sarah and Ashley seemingly never had a doubt that their younger brother David Buchanan was going to be a big league pitcher. Who am I to not trust them? I really began following his career once he hit Georgia State University. He had already been drafted by the Mets at that point but decided to stay in college. Shortly thereafter he was drafted by the Phillies. Two drafts, two of the Braves’ biggest rivals.

Needless to say, David quickly worked his way up to Lehigh Valley and was a solid part of the Iron Pigs rotation. This spring he made it really hard for the Phillies to send him back down, but you knew he would not be gone for long. So I made sure that when he made one of his last Iron Pigs appearances against the Gwinnett Braves that I made the game. I’m glad I did as David was dealing that night and looked sharp. After I watched him beat the Scranton/Wilkes-Barre RailRiders, the team I cover for Yanks Go Yard, twice in the same month, I was ready for him to head to the bigs. One game later he did. 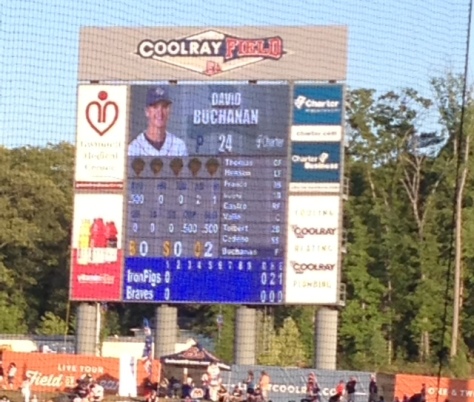 As you will see in the interview, nothing seems more important to David than the support of friends and family. I am so grateful that he took a few minutes to answer a few questions for me even with all the work and preparation he goes through everyday. So, without further ado, let’s meet David Buchanan: 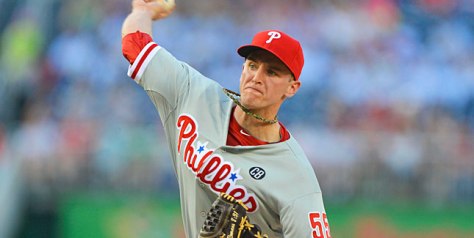 Wayniac Nation: You were born in 1989, which means you grew up just a few miles from Fulton County and then Turner Field during the greatest era of Braves baseball. That being said, what were your emotions after being drafted by the Phillies?

David Buchanan: My emotions were 100% excitement! All of my life I had dreamed of being a professional player and was told by a ton of people that it probably wouldn’t happen. I was officially getting my chance by an amazing team. I knew the Phillies were good so I was ecstatic to get going!

WN: Your start on June 14th was part of history. What did it mean to you as a rookie, nonetheless, being part of such a huge day with Jimmy Rollins’ big hit and watching Mike Schmidt walk onto the field?

DB: Everyday that I walk into the clubhouse I get a chance to hang out with some of the biggest names in baseball. On top of that my coaches have had amazing careers as well. Even more so my manager is a Hall of Famer! Being focused on my start was the main thing on my mind but I knew what was going on with Jimmy. The whole day was amazing! Not only did the team win, Jimmy break the record, and Mike Schmidt congratulate him on the field, but my girlfriend Ashley was there as well to witness it. It was such a cool experience all the way around!

WN: June 19th, St. Louis. Shelby Miller. You get to face off against one of the brightest young pitching stars in the game. You come out and pitch arguably the best game of your young career: 7.2 innings pitched, one run, only one walk, and four strikeouts. Is there extra pressure there, not just in facing such a good team, but in dueling Shelby Miller? 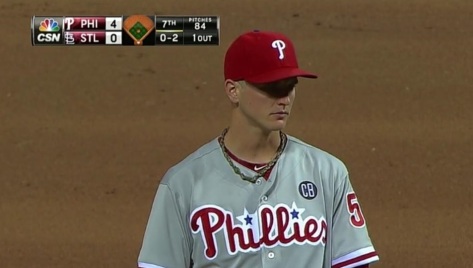 DB: Honestly there was no added pressure toward the team. I approach every team and pitcher the same. If you start thinking about who is better and who isn’t that good you will find yourself in a bad spot. I was excited to throw that day especially because my second family from Arkansas, the Grants, had driven up to see me as well as my sister’s boyfriend and my godfather. Having family and friends there means everything, then having an outing like I did just capped it off.

WN: You are lucky to have some highly successful veterans on the pitching staff for your first run in the bigs. What have you taken from being able to prepare every day alongside AJ Burnett, Cole Hamels, and Cliff Lee?

DB: I can’t even begin to talk about how much I have learned and how much I am learning from those guys! I have developed a friendship with them which means even more. The knowledge that they all have and share with me is priceless. But what is even more impressive is how down to earth they are. All in all the kind of people/teammates they are to me, could never be stated justifiably enough.

WN: On June 29th in Philly you had your first go ‘round with your home town Braves. Was it really just another game? Were the butterflies jumping out of your stomach?

DB: It’s going to be a little different only because I will be facing a team that I literally spent my entire childhood rooting for: wearing shirts and hats, going to games, and pretending to be certain players in the back yard, it’s what I did all the time. So being in the place where I’m pitching against them was very surreal! I had so many friends texting and calling me, telling me that I was putting them in a very tight spot because they all love the Braves but they we’re going to root for me anyway. That definitely meant a lot to receive that kind of support. It was a really cool experience all the way around.