We are 24 hours away from another major and the 114th US Open. A lot of the talk on ESPN and other sports networks is that Phil Mickelson seems confident to get over that hump and grab a US Open Championship. Well, after all those runner-ups at the US Open, our in-house golf expert, Q-Tip, returns to answer the Lefty question:

I live in North Carolina. Unless you live under a rock or are entirely too caught up with Rashad McCants, you have by now heard that Pinehurst is hosting this weekends’ US Open. As if it wasn’t hard enough already, the infamous ol’ Pinehurst Number 2 course has made some changes to make it even more of a challenge. The question on everyone’s mind since the back 9 of the 2013 US Open is: Can Phil Mickelson ever get the final trophy to complete his career grand slam? It’s the one Phil wants most and it has been the most elusive to him. We have watched him come oh so close for so many years only to throw it away. He literally did just that in ‘06 when he hit a drive on the 71st hole into a trash can. So here we are once again, the US Open is about to start, Father’s Day is a week away, fans will sing Happy Birthday to Phil at some point, and the answer to that question is just days away from being answered. Actually, we don’t have to wait. The answer is simple: he can’t and won’t win the 2014 US Open.

Now those who know me are aware that I am not a major fan of Lefty. I don’t hate the guy but I just don’t swoon over him the way others do. I respect his game and I will root for him in a Ryder Cup when he represents our country. When push comes to shove, however, I will root for a lot of others before I root for Phil. None of this is why I say he can’t win. The reason he can’t win is simple: Phil can’t win a US Open because Phil gets in his own way. 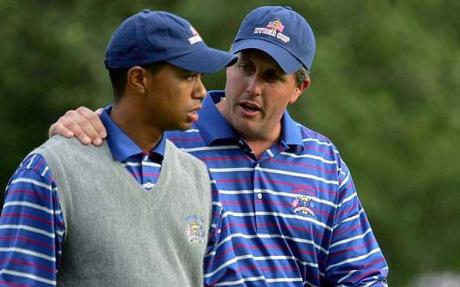 The US Open is a grind. We have heard this countless numbers of time from countless numbers of golfers year in and year out. It is as much of a mental battle as it is a physical one. I mean the USGA is happy if the winner shoots even par. Even? Even, makes you happy? Who the hell wants to watch a bunch of golfers shoot par? I’ll tell you who: the fans. The weekend hacker can watch the pros go out there and struggle and grind on every hole just like we do. Of course, I would most likely shoot double par at Pinehurst, but that’s neither here nor there. It is such a roller coaster of emotions that when a player makes a birdie he has accomplished greatness, only to be brought back to reality on the next hole with a bogey or worse. It is four gruelling days that when we crown a winner we say there is a true Champion. Except for Michael Campbell. What the hell happened to that guy?

TOP 3 REASONS YOU CAN COUNT PHIL MICKELSON OUT OF THE 2014 US OPEN:

We all know that Phil loves to take chances, and that is why people love him. He is one of the biggest risk/reward guys on the tour but that is not US Open golf. US Open golf is methodical, calculating, level headed play for four days that wears you out. Sure he can hit the big 300 yard drive but the hole may call for a 3 iron to get in the precise spot for your second shot. This is not Phil’s game. It’s why trash cans come into play, or wayward drives that end up off of hospitality tents in trampled matted grass that you can only advance the ball 50 yards from (72nd hole in ‘06). Think David Sims versus Tin Cup. Phil can grind for 36 holes, he can do it for 54 holes, heck he may be able to do it for 70 holes but not for 72 and that is why he has 6 second place finishes. 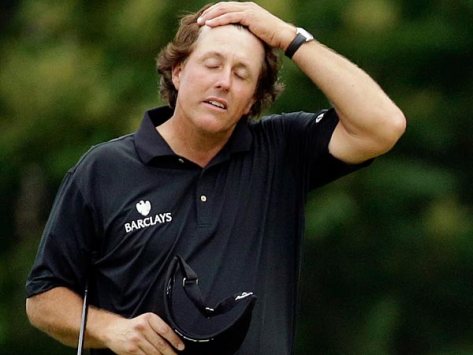 2. The Proof is in the Putting:

What do these tell me? When it comes to a US Open it is important to be accurate off the tee. Normally you don’t want to be hitting out of that rough that the USGA prides itself on. This is not Augusta with her generous second cut, or your normal PGA tour weekend for that matter where a little bit off the fairway is no big deal. It’s also not your normal US Open rough, however. Pinehurst Number 2 has gone back to it’s more native look of years ago. More than 200,000 wire grass plants were added to bring the course back to it’s original look. Instead of thick rough, where you can hack the ball back into play, you now have to deal with wire grass and sandy lies. There’s no telling what happens when you land there. So Phil steps up to the tee and needs a ball in the fairway. He’s 134th on the tour in driving accuracy which means the chances of landing in these plants are as high as Cheech and Chong. Do you see what’s coming? I do: a wayward second shot, a chip to the center of a green shaped like a turtle shell. At 106th on tour in strokes gained putting he would be lucky, and happy, with a three putt for a double bogey. I would be happy as a pig in a pile of poop, but for Lefty, that’s not going to get it done.

3. Anyone Know the Heimlich?

It may be a bit of stretch to call Mickelson a choke artist. What does concern me, however, is the fact that his final round scoring average this year is 72.25. That ranks 152nd on the tour. Phil is the talk of tournaments Thursday through Saturday but for some reason he is disappearing on Sunday’s faster than a snow cone will this week in the Pinehurst heat. If we take a look back over Phil’s last 5 Sunday rounds at the US Open here are his scores:

Thats an average of 73.2, which is a full stroke higher than his current PGA Tour ranking for Sunday rounds. That’s not what we are looking for from a guy searching for his last piece of the Grand Slam puzzle.

I’m sorry to all of you Phil phans but I don’t see the trophy being in Lefty’s hands on Sunday. Maybe he will prove me wrong but I anticipate another Father’s Day where Phil goes home to enjoy time with Amy and the kids still looking for that elusive trophy.

So who wins the US Open you ask? Well, you know I’m not picking Phil. Clearly I can’t pick my go to guy, Tiger, because yet again there is no Eldrick. So, this one is tough: it’s a wide open field, a traditionally tough course made tougher with tall grass and narrow fairways, and the pressure of the US Open.

He has one already and it’s in his backyard, so why not, right? Looking at his stats from The PGA Tour’s official website, he is 57th on tour for driving accuracy (which is premium at the US Open) and 63rd on tour for Greens in Regulation. These are not outstanding stats by any stretch, but here is the one that jumps out at me: he is 9th on tour in strokes gained putting. Simply put, the man can putt. That is a premium on these Donald Ross turtle shell shaped greens to make up for some lost ground while hacking away in some shrubbery. One last interesting stat to think about: Webb is currently ranked 31st in the world. According to Golfweek.com the average ranking of the past ten US Open winners is 31.2. It’s destiny.