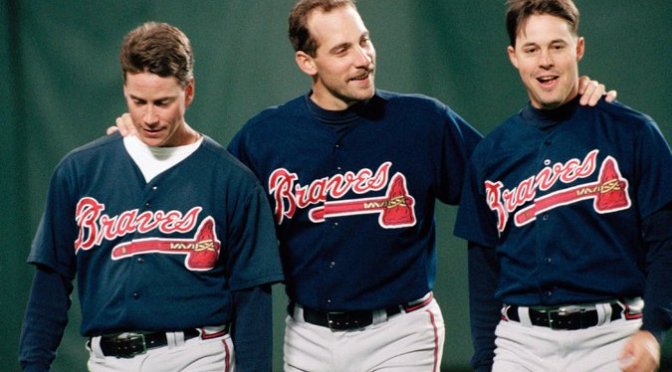 Hey there, sports fans. My name is Wayne, and I am a sportsaholic. With Chris Christie closing bridges, a united healthcare plan no one understands, religion starting wars all over the world, and Miley Cyrus reigning as the queen of pop culture, I don’t see much of a reason to follow much else. That being said, I feel like the perfect time to start a blog, especially one centered around sports rants, is the beginning of a brand new year. It isn’t because this is something I have procrastinated about for two years (which I have) and made some sort of resolution to start. And no, it is not because this is the time to start anew. It’s simply because in January, the biggest hypocrisy in all of professional sports occurs: the voting for the newest inductees into the National Baseball Hall of Fame.

Oh, dear reader, where do I start? Well, before I tear apart what has transpired, how about I say congratulations to Greg Maddux, Tom Glavine, Frank Thomas, Joe Torre, Tony LaRussa and Bobby Cox. All six are very deserving of the honor and I truly believe they are all first ballot guys. If you were to ask me who the three best managers of my lifetime were, those three take the honor. Plus, are you going to tell a guy named The Big Hurt he doesn’t deserve to be in the Hall? I’m not. 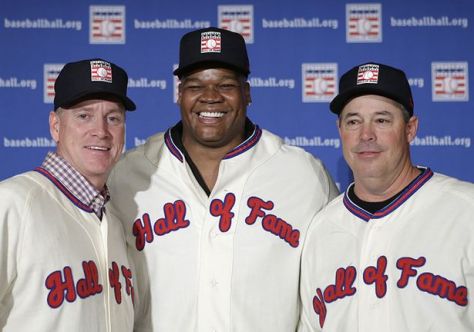 One of my big problems with this years votes is Greg Maddux. I’m 38 years old. I had the pleasure of watching Greg Maddux’s entire career and remembering it. Growing up in the New York City area, as a Yankee fan, I rather enjoyed watching him take on the Mets, often ruining any fantasy their fans had of being competitive. Mr. Maddux received 97.2% of the votes, and I have a huge problem with this.

There is absolutely no excuse for why Greg Maddux did NOT receive 100% of the votes. I would love the opportunity to sit down with the 16 people who didn’t vote for him and find out why. After they gave me some outdated explanation, I would take their votes from them… And then slap them in the face with the ballots. 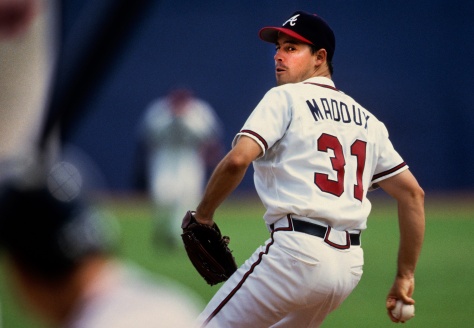 From around 1992 to 2000, if Maddux was pitching against your team, you pretty much chalked it up a loss. Take away his pitching for just a second. From 1990 to 2002, he won 13 straight Gold Gloves. After an “off year” in 2003, he came back to win the award 5 more consecutive years from 2004 to 2008. That means from the ages of 38 to 42, well past his prime in a sport that has 20 year olds sprouting up yearly, he was still the best fielding pitcher in the game. He had 5 career home runs and made us all aware that chicks do indeed love the long ball. He was also an 8 time All Star, but let me say something about All Star appearances. I hold no credence to All Star game selections except for pitchers. Fans vote in the offensive starters with as much, if not slightly more, credibility than the BBWAA, and I had to endure watching the likes of Cal Ripken and Ozzie Smith well beyond their time. However, managers pick their pitchers, and when an opposing manager picks you, well, that is just respect.

In case you forgot how glorious the commercial was, check out Chicks Dig the Long Ball here.

Now, let’s look at that pitching. Any avid baseball fan knows Greg Maddux won 4 Cy Young Awards. But it wasn’t just that he won those 4 awards, it was how he did it. Let’s just look closely at 2 of the seasons he won the award. In 1994, he posted a ridiculous 1.56 ERA and came back in 1995 with a 1.63 ERA. In both of those said seasons, he lead the league with 10 complete games and 3 shutouts (talk about consistency). He finished in the top 5 in THE MVP voting in both the ’94 and ’95 campaigns. He was a one man wrecking crew and arguably the MOST dominant pitcher of his era, yet 16 people felt he wasn’t a first ballot Hall of Famer. And all I can do is ask why?

It’s pretty simple, actually. There is absolutely no criteria to be in the Hall of Fame. For SEVENTEEN straight years, Maddux finished with 15 or more wins and in only one of those campaigns (1990’s 15-15 campaign) was he not well above .500. He has 355 career wins. That’s eighth all time, folks. EIGHTH! Do you know how many pitchers have thrown a baseball? And even though The Professor was all about finesse, he still finished with 3,371 strikeouts, which puts him at tenth all time. (Incidentally, many thanks to baseball-reference.com for all of this information!) Throw in an unreal 3.16 ERA over a 23 year career and we are looking at one of the all time greatest pitchers to ever throw a baseball. And again, 16 people apparently disagree.

One of the problems today’s inductees are facing is the whole Steroid Era, and how certain writers will not vote for anyone who played during the era under the unfair assumption that everyone abused the drug. Of course, the Steroid Era is kind of shaky on its official start date. In June of 1991, then commissioner Fay Vincent issued a statement making steroids officially illegal in clubhouses. Is that the official start? Or was it in 1992, when Curtis Wenzlaff was busted for allegedly supplying the likes of The Bash Brothers with steroids? No, I think most consider the real start of the Steroid Era the post 1994 strike, when not just anabolic steroids but new supplements were being used. Well, if that’s the case, Maddux already had 3 of his 4 Cy Young Awards sitting in his trophy cabinet, so I’m not ok with that rationale.

Other writers have admitted they simply won’t vote for players because they feel that no one should be a first ballot inductee. Excuse me? That’s a blatant bias, and people with any bias should not be on a panel deciding someone’s fate. I was a high school teacher for a few years. I couldn’t just sit there and grade my students based on assumptions or biases. There were scoring rubrics I had to make that set certain standards, elements, and points each student had to hit in order to gain an A, and not only did I create it, I presented it to the students so they understood what their goal was. The Baseball Hall of Fame voting process has none of this. If it did, Maddux hit EVERY standard and stat he needed to, as he is top ten in two huge stats. On top of the numbers, he has the awards, the championship, he was never linked to steroids, he was liked by his peers, the fans seemed to think he was a stand up guy, and as I pointed out earlier, thanks to the longball, chicks dug him.

Maybe you feel like you wasted your time reading this, because at the end of the day, Greg Maddux is now in the Hall of Fame. But 16 people feel he shouldn’t be. And Craig Biggio, one of 28 people with 3,000 hits in the history of the game, isn’t. And nobody is really sure why.

I need to cool off. Until next time folks. Hopefully The NBA won’t have another Nickname Night by then.