Spring is in the air. We have a few official Grapefruit and Cactus League games in the books. If you have been following along you are also aware that I have the NL East predictions in the books (or in the Internet as the case may be). Today we move onto the NL Central.

The NL Central is a well-rounded division. There are four solid teams competing for the title and at least one will most likely lock up the other Wild Card spot. This could be quite an interesting battle from the first pitch in April right down to the last strike in September.

When I look at the Cubs roster, I feel like I’m watching the beginning of Major League as I’m left asking who the hell are these guys? Starlin Castro, the lone star on the squad, took a giant step backwards last season. Their 2013 offense was second to last in the NL in both runs scored and RBI… and they made no moves to better the situation.

The pitching is an even bigger project. Last year’s ace, Matt Garza, is gone and Jeff Samardzija was on the trading block for much of the offseason but couldn’t bring in anything worth… well, anything. The ace of this staff, and that term is used very loosely, is Travis Wood. Wood is coming off a 9-12 season posting a 3.11 ERA with 144 Ks over 200 innings. That’s the third or fourth pitcher on most other rotations. They have a great back of the bullpen in Pedro Strop and Jose Veras but getting to them in meaningful situations may be a challenge.

Theo Epstein is in charge and this is clearly a team dedicated to rebuilding. He was the man in charge when the curse was reversed in Boston and Chicago faithful are still holding out hope that this team isn’t far away from contending. Until then they have the continued growth of Junior Lake, Anthony Rizzo, and Nate Schierholtz to root for — Hoo rah.

This could be my biggest blunder in all of my predictions. The Reds could easily win this division. They have a solid rotation as Johnny Cueto and Matt Latos are as formidable a 1-2 punch as any in the bigs. Homer Bailey is the newest $100 million-dollar man (yes, you read that correctly) so he better perform. Joey Votto, Brandon Phillips, Jay Bruce, and Ryan Ludwick are as good of a heart of the line-up as there is. And Cincinnati finally gets to see rookie speedster Billy Hamilton in the line-up. Then why I do have this team slated to finish fourth?

The Reds have no depth–zip, zero, nada. Where other teams made big signings to deepen their rosters, the Reds lost two huge pieces while adding none. Losing Bronson Arroyo forces Tony Cingrani into the starting rotation. He showed future ace talent in his rookie season last year but that was over a mere 18 starts. He was able to be the swingman last season being used as the 6th starter when Cueto was on the DL and others needed rest. If he has a sophomore slump the Reds are thin at starting pitching and will struggle to fill the void. Cueto, the undisputed ace of the rotation, has Cy Young stuff. He also has big-time injury history. If the Reds intend to go far Cueto needs 30-plus starts.

On the offensive side of the ball they lost the on-base machine Shin-Soo Choo. Choo was huge as he hit homers, hit for average, got on base, stole bases, and scored tons of runs for the Reds big bats. He is now in Texas and Billy Hamilton is his replacement. No one has questioned what Hamilton can do when he gets on base, but many questions surround if he can get on base. Ryan Ludwick, who has never had 500 ABs in his career and is coming of a 2013 season lost to injury, will now be needed as an everyday outfielder.

This team has tons of talent. Their stars are also getting older and are injury prone. Baseball, as we know, is a long season. Their lack of depth will come back and haunt them. 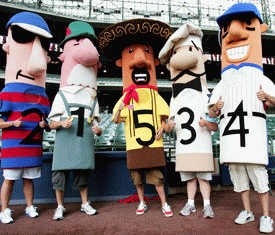 3. THE MILWAUKEE BREWERS.
(Covers has the O/U at 78.5 while FanGraphs has them at 78-84.)
The Brew Crew is back and Milwaukee once again has something to look forward to other than a sausage race. This offense is stacked with power so even if their questionable pitching staff struggles they should win a few games just by out-bombing the other team.

Ryan Braun is the big question mark. All eyes will be on him as he returns from suspension for his PED soap opera that he didn’t take, but took, but didn’t mean to take, yet still did. Will he be the player he once was, a perennial NL MVP candidate, or was he a PED nightmare? I stand firm to my belief that PEDs don’t make someone a good player. Ryan Braun can play ball and the PEDs simply enhanced the gifts he already had. Braun will be back with a huge chip on his shoulder. He will have a lot of young guns like Scooter Gennett, Khris Davis, and Jean Segura to drive in as well as solid bats like Carlos Gomez, Jonathan Lucoy, and the shell of Aramis Ramirez to protect him.

The starting pitching is a bit iffy. That’s why they brought in Matt Garza. I have never thought this guy was ace-of-the-staff material being more suited as a number two pitcher, however the Brewers are banking on his power pitching to come through in a big way. Yovani Gallardo was absolutely dreadful last season. The one time ace of the staff will now throw every third day. He has shown some flawed mechanics over the past few seasons watching his strikeouts fall and walks rise yearly. He is the Brewers X-factor: only 28-years-old, if he can find his old form, Garza, Kyle Lohse, and Gallardo are one heck of a 1-2-3 front end of the rotation.

Finally! Pittsburgh fans got to cheer for a winning season for the first time in over two decades. Clint Hurdle has this team poised and ready to make sure they continue their winning ways and don’t return to the perennial sub-.500 joke of the NL Central they had been.

Reigning NL MVP Andrew McCutchen is my favorite player that doesn’t wear pinstripes. There isn’t one thing this guy does poorly as he is a lights out center fielder, a terror on the base paths, a nice contact hitter, and has the power to be a run producing threat. McCutchen is a special player and a team with his sort of talent won’t just go away. It’s a scary thought for the rest of the NL Central that Cutch seems to be now hitting his stride at 27 years of age.

The Pirates have one glaring problem on offense and it is why I don’t have them catching the Cardinals quite yet. They are a boom or bust team. They don’t play an inkling of small ball or get on base frequently. The have bashers like Pedro Alvarez. Starling Marte came into his own last season and coming off a 12 HR, 41 SB campaign he can help change that mindset. Pirate fans are eagerly awaiting the arrival of Gregory Polanco who has already had a big debut in Spring Training.

The pitching staff takes a hit losing veteran ace AJ Burnett but let’s face reality. Losing a 37-year old pitcher who was set on retiring is not the biggest loss. They need Francisco Liriano to continue his rebirth and mature into what everyone thought he could be as he enters his 30s and becomes the ace of this young staff. They also need Gerrit Cole to avoid a sophomore slump and not tease us with the goods he showed as a rookie. This staff has 6 quality starters which is never a problem for any team. The Pirates also have the luxury of knowing that if their starters can getting them six quality innings then they are in good shape. Set-up man Mark Melancon and closer Jason Grilli were nearly untouchable last season as anchors to one of the best bullpens in baseball.

There is no reason to bet against the reigning NL Champs. They once again seem to get better by subtraction as the loses of Carlos Beltran, David Freese, and Edward Mujica shouldn’t hurt them at all. This team is solid up and down the line-up and has one of the best young pitching staffs in the game.

The Cardinals line-up shouldn’t miss Freese as his departure will get Matt Adams full time at bats. They also made themselves strong up the middle bringing in veteran infielders Mark Ellis at second base and Jhonny Peralta at short. The outfield takes a little hit with the loss of Beltran but everyone in baseball knows he was just keeping the spot warm for all-world prospect Oscar Taveras. The Cards are in no rush to get him to the bigs, but I think it happens sooner than later. That is why I see Taveras as the NL Rookie of the Year.

The pitching staff they have assembled is one of the top five in baseball. It has some homegrown youngsters that will be fun to watch develop as a unit. Veteran ace Adam Wainwright anchors the young staff. Watching what playoff hero Michael Wacha and rookie phenom Shelby Miller do for an encore will be exciting as they both possess top of the rotation stuff. If they come of age this season and Jaime Garcia returns to full health, along with Lance Lynn the Cardinals will have the best rotation in baseball. Once they get to the bullpen, Trevor Rosenthal will take over at closer for the departed Mujica. I don’t know what they feed their closers on the farm, but Rosenthal is yet another hard throwing pitcher that will have no problem shutting down games for the Cards.