Yet another week of sports has found its way into the books. (Incidentally, I always wondered what books stuff seems to find its way into, especially with the Internet and Wikipedia these days. But I digress…) It’s also the last day of my ten day road trip up and down the east coast. After taking in a lovely Single-A Hickory Crawdads baseball game last night, I am ready to head home. But not before one last week in review from the road!

The final four in the World Cup is set. The host nation of Brazil is set to take on Germany on Tuesday, while the upstart Netherlands club, who sent my beloved Ticans of Costa Rica home yesterday vi penalty kicks, is ready to play Argentina. The big news moving forward is that two of the biggest names in the world will be absent from the pitch for the remainder of the Cup. Sergio Aguero of Argentina remained sidelined but hopes to be prepared for the semi finals, although it looks bleak. Brazil lost Beats By Dre spokesperson Neymar for the remainder of the Cup. He broke a vertebra in his back on a controversial play against Colombia and would eventually be airlifted to a hospital. His absence could invoke them to play stronger to bring home the Cup for him, or it could be a devastating blow as he is their clear cut leader. This past Tuesday brought an end to the United States impressive run.  Although many were happy and proud of this team, I saw it a little differently. In case you missed last Wednesday’s story, here are the three reasons you should not be happy with the USMNT performance in the World Cup. Also, as depicted in the picture above, the largest locust in the history of the world assisted in a goal for Colombia’s James Rodriguez. After the game, the locust tested positive for PEDs. 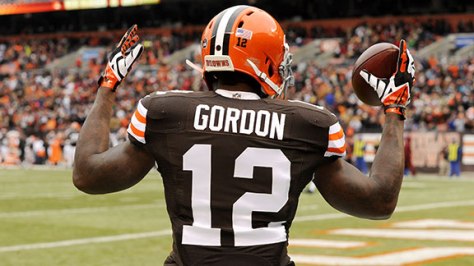 Does Josh Gordon simply not want to play in the NFL? Justin Blackmon Part Deux was arrested on Saturday morning for a DUI after blowing a 0.9. This of course comes after he was caught in May for marijuana. While Gordon seems like a blast to hang out with, his 2015 season and career are clearly in jeopardy. This would be a huge blow to the Browns and fantasy geeks nationwide. For those of you who don’t know Josh Gordon, he was the guy who made Brandon Weeden, Brian Hoyer, and Jason “Captain Checkdown” Campbell look like NFL quarterbacks last season. Johnny Manziel reportedly tweeted how angry he was at Gordon as Mr. Football felt he was the only Browns’ player allowed to hog the limelight. In other big NFL news, Jimmy Graham was declared a tight end and not a wide receiver as he had hoped in his franchise tag ruling. So if you get a chance, please tweet Jimmy (whose own Twitter account says he’s a tight end, Einstein) and tell him how sorry you are for him that he has to make ONLY a little over seven million this season while he negotiates what will most likely be the largest tight end contract of all time.

Queen James and the Big Three are still currently unsigned in the NBA. Early reports were that LeBron James, Dwyane Wade, and Chris Bosh were negotiating amongst themselves to figure out a way to get all three back together on the Heat next season. Now, there are reports surfacing that James may indeed go his own way, with Phoenix being a potential suitor. I guess he figures Phoenix will be a shorter flight home from San Antonio when he loses to Tim Duncan, Tony Parker, and Manu Ginobili, aka The Real Big Three, again next season. In other NBA news, the 2014 draft picks have started play in the Orlando Summer League. Shabazz Napier and Marcus Smart had shaky debuts but finished out strong. Nerlens Noel impressed everyone, dropping 19 points while grabbing two boards, and adding three assists, four steals and one block in his first professional performance.

How do you describe the play of Clayton Kershaw of late? Gnarly? Sick? Silly? Whatever you choose, Kershaw has decimated MLB lineups and has now dealt 36 consecutive scoreless innings over 32 innings while allowing a mere 13 hits while striking out 44 and walking four! That’s insane. Kershaw is honing in on his second consecutive season with an ERA under 1.90 and back-to-back Cy Young Awards. That would give him three in four years at the age of 26. That’s right, folks, Kershaw is just hitting his pitching prime. Throw on top of it that he just got paid some serious loot and unlike other divas in the world of sports, he’s still actually performing! We are watching something truly special in LA and pretty soon everyone of his starts is going to be a prime time game. Across the country, this past July 4th marked the 75th anniversary of Lou Gehrig’s immortal farewell speech. The greatest first baseman of all-time gave a speech on July 4, 1939 that rivals any ever given. It evokes tears and gives chills to every sports fan to this day.

BONEHEAD OF THE WEEK AWARD: Finally some NHL news that is worthy to write about. Philadelphia Flyers’ captain and forward Claude Giroux was arrested on Canada Day in Ontario for repeatedly grabbing a male police officer’s rear end. Seriously. I didn’t even have to make any of that up, so I say thank you Claude. According to USA Today, Giroux said, “”I regret my actions on Canada Day and sincerely apologize to my fans, teammates and the Philadelphia Flyers organization for my misguided attempt at humor.” Don’t sell yourself short, pal, you’re the funniest hockey player to ever live. Well, next to these guys at least:

There you have it. An entire week in less than 1000 words. Hope everyone had a good Fourth of July Weekend and stay tuned for another wacky week of sports!!!