It’s hard to believe that another winter has come and gone. Opening Day (the American one, not the Australian one that put Kershaw on the DL) is here and the boys of summer are ready to get back it. 30 baseball teams will take the field over the next few days to get their 2014 season rolling.

What if there were a 31st team? What if there was an All Star line-up of all the characters from baseball movies and T.V. shows clumped into one mega-team? It would be an insult to call this a Dream Team, but that is what we are talking about here. There needs to be some guidelines though. I can’t take players from movies or shows that are actual players. That eliminates Babe Ruth, Lou Gehrig, Ty Cobb, the entire Chicago Black Sox and a bevy of others. Characters based on actual players (like the ladies in A League of Their Own) or a likeness of an actual player (like the ghosts in Field of Dreams), however, is allowed. With these rules in place, my prep work began. I had to dig deep. Some of these movies I haven’t seen in a while. Some are outright terrible, but they all deserved consideration. After much deliberation I narrowed it down to a few players at each slot. Here’s a look at a position by position breakdown of the one week training camp (and by training camp, I really mean me sitting in front of my Smart TV and watching classic clips on YouTube to remind myself how great some of these characters were) held to see who made the cut.

Catcher:  Aside from the outfield, this was the closest position battle. There were quite a few players to choose from, but four took it down to the wire. Dottie Hinson (Geena Davis, A League of Their Own) definitely deserves consideration. She was the heart and soul of the Rockford Peaches and was hands down the best player in the All-American Girls Professional Baseball League. Crash Davis (Kevin Costner, Bull Durham) also enters the debate. His downside is that he is a career minor leaguer. His upside is his willingness to be demoted to help tutor the future of baseball.  Hamilton “Ham” Porter (Patrick Renna, The Sandlot) is not only a great catcher, but he is a historian, a comedian, and one of the best s’mores chefs in the land. What can’t you say about Jake Taylor (Tom Berenger, Major League)? He came out of retirement to lead a team of nobodies to the playoffs and win the heart of Rene Russo.

WINNER: Taylor. His experience, baseball sense, and ability to leg out a bunt with no knees make him the leader of this squad.

First base: There haven’t been many great fictional first basemen through the years. Stan Ross (Bernie Mac, Mr. 3000) was a superstar for the Milwaukee Brewers, except it took him until the end of his selfish career to understand what being a team player really meant. And he NEVER GOT HIS 3000th HIT! Let’s face it. Bertram Grover Weeks (Grant Gelt, The Sandlot) was a junkie. He introduced the whole team to that Chew and disappeared in the ’60s on some drug bender and was never seen again. That doesn’t help much with team chemistry, and what players that use drugs ever pan out as All Stars? Jack Elliot (Tom Selleck, Mr. Baseball) didn’t know when to hang it up and had to end his career in Japan. That doesn’t sound like someone I want anchoring my first stop around the bases.

WINNER: You think I would choose any of these bums? Hell no. My first baseman is Toby Whitewood (David Stambaugh, the original Bad News Bears). He really was the most unheralded star of Chico’s Bail Bonds as Kelly Leak always stole his thunder and pulled a beauty of a hidden ball trick in the field at the Astrodome.

Second base: This came down to a two man… er, player competition. Tommy “Repeat” Timmons (Shane Obedzinski, The Sandlot) is the third member from The Sandlot team to make the list. Tommy was better at constructing things than he ever was at baseball. Marla Hooch (Megan Cavanagh, A League of Their Own) is a hard hitting, hard to look at basher. But if we were picking on pure looks, Tom Selleck and that legendary mustache would already be on the team.

WINNER: Hooch. Let’s spice it up and give this team some variety. On the plus side, she shouldn’t be a distraction in the clubhouse. 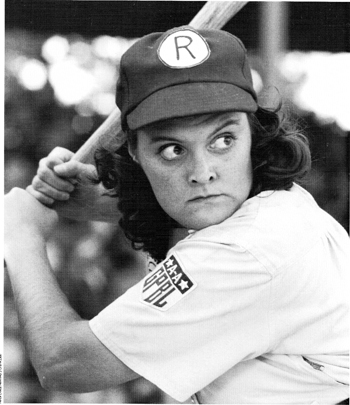 Short stop: I allowed Gus (Rob Schneider, The Benchwarmers) a very quick tryout, but in the end, no matter how much he changed, he was a liar and a one-time bully, and I’m not looking to run a Miami Dolphins locker room with my squad. That means this was a simple one-man battle.

WINNER: Tanner Boyle (Chris Barnes, the original Bad News Bears) This is the second Chico’s Bail Bonds alum to crack this squad, so it tells you a little something about Buttermaker’s bunch. Boyle was a little sloppy, but who on the Bears wasn’t? He was the spark plug though and the toughness this team needs. 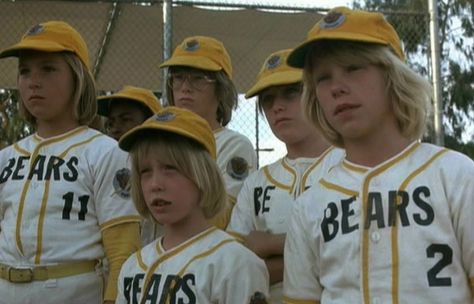 Third base:  Doris Murphy (Rosie O’Donnell, League of Their Own) was a brash, overly confident vixen of a baseball player, but she had guts and could play the hot corner pretty well. Ed (Ed) was a freaking monkey, and do you think I would pass on giving a monkey a try-out at third base? Do you know what kind of revenue a third base-monkey would generate? Especially if he smoked cigarettes? Roger Dorn (Corbin Bernsen, Major League) was a snide and snooty little brat, but we’re talking baseball skills here.

WINNER: Dorn. When he isn’t ole-ing the ball and worrying about his contract amenities, he can straight up field. We also know he is clutch at the plate delivering timely hits at the end of that one-game playoff series with the Yankees. He also delivers a hell of a sucker punch.

Outfield: This was hands down the toughest position battle. Roy Hobbs (Robert Redford, The Natural) didn’t even need to show up for try-outs. If he wants to play and his side is all healed up, he starts on my team, no questions asked. That sliced the competition down to just two slots. I was able to remove Bobby Rayburn (Wesley Snipes, The Fan) from the conversation because I’m not allowing one actor to occupy the last two spots in the outfield. That means Willie Mays Hayes (Wesley Snipes, Major League) is in the mix. The guy flat out flies on the base paths, plus he has the Richard Sherman ego on top of it. Kelly Leak (Jackie Earle Haley, the original Bad News Bears) has a leg up on the competition because he smokes cigarettes and drives his motorcycle right onto the field and, well, I’m afraid of telling him no. Benjamin Franklin Rodriguez (Mike Vitar, The Sandlot), more lovingly known as Benny the Jet, is borderline. First of all, did he ever play one single position in the entire movie? Secondly, aside from his speed, he has a marginal skill set. The Ghost of Shoeless Joe Jackson (Ray Liotta, Field of Dreams) was invited to try-outs because technically, he isn’t a real player. And even the specter of Shoeless Joe hits a hell of a lot better than some living ball players (paging Mr. Uggla). Pedro Cerrano (Dennis Haysbert, Major League) is a hulking beast of a man. He needs to still get a better grasp of that curve ball, Jobu.

WINNERS: Hobbs, Leak, and Hayes. He may run like Mays but he hits like the leadoff guy I want in my line-up. He will man center field while Leak, who shifted from third to outfield in Breaking in Training, will man left. With Hayes’ swagger and Leak’s bad boy attitude, teams will fear us. Having Hobbs patrol right quietly will install fear by silence.

I’m keeping Cerrano as my DH, though, and I am also keeping Benny the Jet as my utility guy, so here is the batting order:

My offense is stacked, but wait until you get a load of the pitching. As far as I was concerned, there wasn’t any competition when it came to the starting rotation, the middle reliever, the set-up man, and closer. So, without further ado, here is your staff:

The Ace — Amanda Whurlitzer (Tatum O’Neal, Bad News Bears) She’s sneaky and sly and has quite a mouth on her, but she can flat out throw and hold her own with the big boys.

Chet Steadman (Gary Busey, Rookie of the Year) The Rocket is a crafty veteran who happens to be played by one of the funniest living specimens on the planet. There was no way I was leaving Busey off this team.

Billy Chapel (Kevin Costner, For the Love of the Game). Costner lost out on Crash Davis, but he gets the nod on the mound. I wanted to leave him off entirely because the S.O.B. no-hit the Yankees but he’s too good to deny.

Eddie Harris (Chelcie Ross, Major League). If he can’t get it done with that old rubber arm of his, then he has an arsenal of Crisco, Bardol, and snot hidden away to sneak one by any batter.

This spot was a toss up. Both were youngsters and both had promising futures. It came down to Ebby Calvin “Nuke” LaLoosh (Tim Robbins, Bull Durham) or Henry Rowengartner (Thomas Ian Nicholas, Rookie of the Year). It was a really tough choice, but it came down to the fact that Nuke winds up with Susan Sarandon and Rowengartner got to have pretend sex with Tara Reid. I choose Tara Reid… I mean, Rowengartner to round out the staff.

The bullpen is the most fun part of this team. There will be a lot of money spent on fine wine, hookers, and bail when the three of them go out to celebrate. Sam “Mayday” Malone (Ted Danson, Cheers) is the unquestioned elder spokesman of the bullpen. He cleaned up his act, so he should be a calming influence on his other two compadres. Kenny Powers (Danny McBride, Eastbound and Down) may just be an average American with extraordinary hair, he may be a bit of a xenophobe (or patriot depending on who’s definition you use), but he will blow anyone away with his stuff. The closer is Rick Vaughn (Charlie Sheen, Major League). This is a no brainer. Not only does he hit triple digits on the radar, he’s one of the most memorable sports characters on this list. He’s the Wild Thing baby, and we all know that’s winning.

Now, who in their right mind would want to manage this bunch of A and B-List, ego-driven celebs? I wanted to go with Lou Brown (James Gammon, Major League) for the job he did creating that peal away stripper. Ultimately, Jimmy Dugan (Tom Hanks, A League of Their Own) gets the job because he uttered one of the most famous lines in baseball movie history: “There’s no crying in baseball.”

There you have it, folks. It may very well be the greatest roster ever established. Until next time, enjoy your Final Four and happy opening week of baseball.