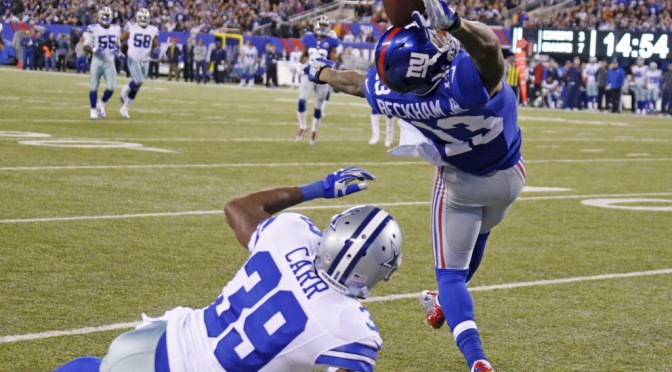 There was some gems of football games yesterday, wasn’t there? It was too hard to focus on just one of the many interesting things we saw yesterday, so I thought I would give you a couple of quick impressions of some of the bigger stories around the NFL.

The Panthers and Giants game was one for the ages. It had everything: high-powered offense, some big defensive plays, a big comeback and JPP swatting down a big pass with his nub (too soon?). But obviously what stole the headlines was Odell Beckham, Jr. and Josh Norman.

There is no denying that Beckham should have been ejected for this hit after the play that was blatantly an intentional helmet-to-helmet hit. But everyone is in a tizzy because he wasn’t. It simply further displays how badly the current referees either don’t care or have completely lost control of the game.

This happened right in the middle of the field, people. OBJ did NOTHING to try to hide the fact that he was charged up and ready to do a little head hunting. This isn’t on the Giants or Tom Coughlin not benching him as a disciplinary issue. This isn’t about Panthers’ fans being all torn up because OBJ was acting exactly like their hero Steve Smith has done for years (seriously, I lost a fantasy football championship in 2005 when he was the top scoring wide receiver and got ejected in the second quarter for punching someone).

This is about officials missing a dangerous play and not taking action in an era that the NFL has clearly gotten softer and is supposed to only be “caring about player safety”.  I can’t write anymore about Dean Blandino and his officiating practices (mainly because I already did right ==> HERE), because it has exhausted me.

By the way, what the heck is Norman saying to these guys? This is a guy who got into Cam Newton’s head and nearly made him strangle Norman in training camp. You know, Cam Newton? The guy that gives the football from every touchdown to some lucky kid in the stands? Made to look like a killer? I want to know what he’s saying.

The Panthers wound up winning and Norman provided some choice post game comments. While I think Norman has made himself amongst the elite in the game, let’s not forget that OBJ smoked him early in the first quarter and dropped a wide open touchdown. Norman needs to go back and watch some Steve Smith highlight film and stop worrying about the dancing, and realize that the big problem was that someone tried to take his head off.

Josh Norman with some strong words after his battle with OBJ. pic.twitter.com/0Ic6q3virc

How bout them first place Houston Texans?! Obviously, my loyal readers know how excited I am that my Texans broke their curse in Indianapolis and finally beat the Colts on their home field.

Well, that was nice.

It opens up a bigger question though. How come Bill O’Brien was able to figure out a way to win with Brandon Weeden and Jason Garrett wasn’t?

I think it brings into question Garrett’s coaching abilities that he had such a difficult time winning without Tony Romo and that elite line plowing the way for DeMarco Murray. As my brother said, though, Garrett has the best job security in football.

Why? Who the hell would want to coach under Jerry Jones? The fact that he has done it for as long as he has… well, he’s not going anywhere.

Man, that Steeler and Broncos game was a blast to watch, huh? The Steelers proved they actually have a defense and completely shutout the Broncos in the second half. They also proved they have the best offense in the game.

I don’t care what the numbers say, the Steelers are my favorite team to watch when they have the ball in the NFL. Martavis Bryant and Markus Wheaton do their jobs and are arguably the best complimentary wideouts in the game on pure talent. Heath Miller is the most reliable tight end in the AFC, and who doesn’t love yelling HEEEEEEEEEATH? DeAngelo Williams is looking like it’s 2005 not 2015 (click on his name and take a look at his 2005 numbers), and Antonio Brown…

I said at the beginning of the season that Antonio Brown should be the first player to break the fantasy mold and be selected first overall above any running back. I still believe that, and I think he should next year as well.

The guy is so good. He’s electric and he totally dismantled arguably the best defense in the game this year. When he has Big Ben chucking him the ball — who by the way may be the most underrated QB in the history of the NFL — he is only more fun to watch.

The Steelers are fighting for their playoff lives, but if they get in, they could seriously win it all.

I take that back. He could be, if he makes some adjustments. The problem is he has complete control, and the only person he has to consult with is… well, himself.

He is certainly not what you would call a player’s coach. It seems like every player that leaves town has many kind words to say about him (<– sarcasm font needed), and the best player on his team doesn’t even want to be there.

Like I said earlier in the season, Chip Kelly is the Wild Cat of coaching. He brought this “fastest team in the NFL” approach to the game, and people have caught on. Is he going to hover around eight wins a season every year? Sure, and hey, in the NFC (L)East, that may earn you a division title. But right now, unless he makes some adjustments in personnel and game play, Andy Reid‘s record of four straight NFC Championship games is in no danger of being compromised.

That being said, I would hate to play Kelly in Madden football. That guy plays Madden football on the playing field, imagine what he could do on the big screen in my living room. Sheesh.