Let me start by saying this. When it comes to the NBA and MLB, daily fantasy leagues on Draft Kings or FanDuel are the greatest thing since sliced bread. These geniuses have taken the long seasons of baseball and basketball that fantasy mainstays have endured for years, and made it possible for you to win on a nightly basis. It’s brilliant. You don’t lose interest, because instead of racking up points for an end result five months down the road, you have to be on your A-game every night of the week. It is highly addictive and so much fun that I am pondering leaving my fantasy MLB and NBA leagues entirely, and focusing on daily leagues in the future.

I am torn, however, in the weekly fantasy league experience for the NFL. I can’t tell if it is for me or not. I think it is a fantastic concept, but like many old foggies, I am a traditionalist and am having trouble adjusting to the new way of life in fantasy football.

My co-workers at Verde and I have started playing weekly fantasy leagues. It’s an inexpensive way to add more excitement to your football Sunday, but for the old school fantasy guy in me, I am having a little trouble jumping right in. Let me explain why.

It ain’t about the money…

Fantasy football, as compared to fantasy NBA and MLB, has never been about the money for me. My Nitro league has it’s trophy, other leagues have its belt, and my Old School Football League has Cochran, the man I have been chasing in fantasy football for 11 years. Weekly draft leagues are ALL about the money. Sure, I am playing guys I work with, so I get some bragging rights, but it’s not the same. Having that trophy in my house for an entire season takes it to another level.

That being said, I enjoy money. So, winning a league of ten people certainly makes it entertaining. It also helps my wallet, which is why I am not giving up on it yet! 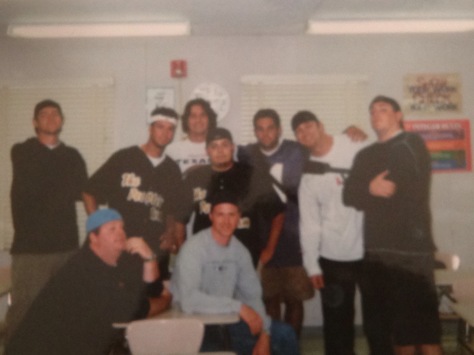 They are a bit foggy and I have used them before in our Starts and Sits posts, but these are the two divisions in my Nitro League, the Wolf Pack and the Four Horsemen (even though there are five teams… don’t ask). See those two guys right above in the red shirts? They are two of my best friends. But from September to December, I hate them. When we finally squared off for the championship two years ago and I went down by 50 before the four o’clock games started, I stormed out and didn’t talk to him for a week.

The same can be said about that guy behind Marshall Faulk. Known as Dunton to Wayniac Nation, for 18 years, I dominate his TomCats in the regular season, but when it comes time for playoffs, he finds another gear. Beating him for the championship in 2005 was so rewarding, I still remember how the entire game went down.

For 11 years in my Old School Football League, my old room mate Jay and I, who used to drink enough Captain Morgan back in the day to keep the Caribbean’s economy healthy, had The Captain Bowl every year. And like I said, I will forever be chasing Cochran, just wanting one chance to make him pay for all the playoff loses he has handed our Fighting Blue Hose.

I’m a Yankees fan… salary caps are not my thing!

I want the opportunity to put the best team possible on the field. That’s why it’s fantasy. I want an AP and Le’Veon Bell backfield. I want Tom Brady throwing to ODB and Antonio Bryant. Weekly leagues don’t allow that because of the salary cap. I was so annoyed by the fact that I had to pick from Jermaine Kearse or Cole Beasley last week in order to ensure I could get some fire power elsewhere on my lineup.

On the other end of the spectrum, it is an entirely new strategy to fantasy football. The more comfortable I get with it, perhaps the more I come along. In weekly fantasy leagues, you are truly a GM, putting together a roster that doesn’t necessarily have superstars at every spot, but instead, winners. It is a lot more work, but I am starting to think that that is what makes it more interesting.

So, the first week of the season I was in third place heading into Monday night. I had two players left, and was ready to watch them win me some money. The problem was is the guy in first place had the exact two same players. My night was over, I had no chance.

Again, however, that makes you an actual GM. It’s not about signing Julio Jones to a lucrative contract, it’s about the side pieces you throw in that get you the big points.

Let me reiterate. I don’t hate weekly fantasy football, I am just learning. There are some things I have come to love about fantasy leagues that weekly leagues will never capture. But the concept is brilliant and brings aspects to fantasy that yearly leagues could never make possible.

Being so sold on NBA and MLB daily fantasy, it is odd that I am having a hard time adjusting to the NFL weekly lifestyle. I’m sure I will come around… after all, it is fantasy!