This past Monday Night Football pitted the New Orleans Saints against the Baltimore Ravens. What we saw was more of the same. The Saints horrendously hole-y defense couldn’t keep the other team from outscoring their potent offense. It was also yet another night that Drew Brees went off, as he tossed the pigskin for 420 yards and three touchdowns at an amazing 77-percent rate.

It was just another night for Drew Brees. Poor, poor Drew Brees. What amazes me most about Brees is how unheralded of a quarterback he seems to be. I know, I know, Brees is the savior of New Orleans, lifting them up to new heights in a time when they sorely needed it. And Brees is one of the most beloved and stand-up players in all of the NFL. He is also, however, very rarely brought up when the discussion arises about who is the Greatest QB of All Time?

Brees suffers from what I like to call the Michael Jordan Syndrome. Jordan was the King of the NBA for 13 seasons from the mid-80s to the late 90s. During that time, some of the greatest players to suit up were on the court lighting up box scores for decades. Names like Charles Barkley, Karl Malone and (as much as it pains me to say it) Patrick Ewing were playing second fiddle to His Airness. If you took Jordan out of the picture, these guys, amongst a bevy of others, all would have had more MVP Awards, probably a few more scoring titles and certainly more championships than the combined zero they accumulated during Jordan’s reign. That doesn’t make them any less part of the all-time NBA greats, but it clearly has removed them from any consideration for the G.O.A.T.

The same could be said for Brees. Throughout his entire career, he has seemed to be on the outside looking in amongst the league’s great quarterbacks. Brees’ career started off slowly with San Diego, but you wouldn’t even know he existed because the eyes of the NFL universe were watching Brett Favre break records and this young Peyton Manning kid come into his own. Then a certain Tom Brady stepped in for an injured Drew Bledsoe and the conversation of the best quarterback in football became a yearly battle between Brady and Manning. Then, Favre left Green Bay and this Aaron Rodgers kid blew up on the scene and Brees seemingly took yet another step back.

But why? Evaluate the numbers alone. There have been only 8, EIGHT, 5000-yard passing seasons in NFL history. Fifty percent of those belong to Brees, including the last three years in a row. He currently has 3,491 yards passing on the 2014 season. That’s an average of 317 yards per game and with five games left on the schedule, that puts him at 5,076 yards passing on the season. That’s four seasons in a row and over 20,000 yards passing in four years. That’s an entire career for a lot of quarterbacks! I know what you’re going to say: it’s a different NFL as it is now a passing league. That’s fine and all, but Brees has never fallen off and has clearly defined this passing age of football.

Brees is currently Top Five all-time in passes completed and attempted as well as passing yards and touchdowns. He has the seventh highest QB rating of all time as well. When you discuss statistical passing leaders, his name is in the same breath as Manning, Brady, Favre and Dan Marino, yet when the best QB conversation is mentioned, those four are usually brought up and Brees is not.

Again, I have to ask why? The knock against Marino was that he never won a championship, but he also did things through the air at a time when other quarterbacks stood by in awe. Well, Brees has one of those. By any chance, do you remember who he beat? True, you can make the argument that Brees doesn’t have any MVP Awards, but he does have a Super Bowl MVP Award. He also has a Comeback Player of the Year Award and TWO AP Offensive Player of the Year Awards. The 2009 season in which Brees led the Saints to the Super Bowl, he couldn’t even muster the MVP. Know why? Manning was wrapping up his fourth. 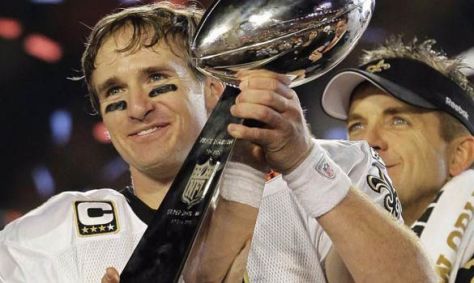 Brees, like Marino, has a lot of excuses that could be made due to circumstances out of their control. Since Brees has come to New Orleans, like Marino, he has never had a reliable running game. Like Marino, he never had Hall of Fame receivers. They have both had very good receivers that they have made great. Seriously, you think Marques Colston is a number one receiver on any other team in the NFL? Robert Meachem? Devery Henderson? Lance Moore? Hell, Lance Moore can’t even get on the field in Pittsburgh behind two rookies and Meachem failed so badly when he left New Orleans, San Diego sent him back! Brady, on the other hand, was a clutch, game-managing QB until he broke records throwing to Randy Moss, who is one of the greatest receivers ever. Montana had the luxury of throwing to Jerry Rice who made Rich “The Cannon” Gannon (Go Blue Hens!) an NFL MVP. Manning? He has thrown the ball to two sure-fire Hall of Famers and probably two or three more along the way (Dallas Clark, Wes Welker and Demaryius Thomas all present possibilities). Elway was 0-for-3 in Super Bowls until the best running back of the late-90s and possibly the greatest tight end of all time came along. That doesn’t take anything away from the greatness of those quarterbacks, but it certainly helps.

Most of the places you look, whether it is an NFL Films piece, a horribly executed ESPN Top Five or anywhere on the glorious internet, when it comes down to greatest QBs of all time, the argument usually revolves around Manning, Brady, Favre, Marino, John Elway, Joe Montana and Unitas. Most Top Ten lists don’t even mention Brees, throwing the likes of Fran Tarkenton, Warren Moon, Steve Young, Jim Kelly, Roger Staubach and Terry Bradshaw into the mix. I’m not taking anything away from any of those guys (well maybe Bradshaw. Go ahead look at his numbers, talk about being in the right place at the right time and taking all of the glory). I’m not saying that they aren’t deserving. All I am saying is that it is time to give serious consideration to Drew Brees as the G.O.A.T of NFL QBs.

26 thoughts on “The Sad Plight of Drew Brees”