Bill Simmons is one of the reasons Dunton asked to join Wayniac Nation as a writer. Aside from his Boston loyalties, I think Simmons is a hell of a sports mind as well. Well, Simmons is now suspended and Dunton isn’t happy. He asked if he could go off in a rant on how ESPN is in the wrong for suspending a sports analyst for discussing sports. Bash ESPN, you say? Of course, Dunton, go right ahead…


This Bill Simmons suspension has me outside of my comfort zone. Normally I am the golf writer of this upstart site, and Wayne, the founder and creator of Wayniac Nation, takes on the harder, controversial topics. However, I cannot sit on the sidelines this time. There is simply too much wrong here.

This past Monday Bill Simmons went on his podcast, a podcast that I guess is technically owned by ESPN, and blasted Roger Goodell for his inaction and possible misleading information in the now infamous Ray Rice case. Simmons point was simple: there is no way that Goodell did not know what was on the tape from inside the elevator prior to TMZ releasing it for the world. This is a point that many level-headed people can get behind, including myself. In Simmons’ tirade he did drop a few choice words and dared ESPN to take action against him for his opinion on this matter.

Well, it did not take long for ESPN executives to respond to this request and in turn they suspended Simmons for three weeks. Three weeks. That is 19 days more than the two games Ray Rice was originally supposed to miss. Here is the justification for the suspension of Simmons:

“Every employee must be accountable to ESPN, and those engaged in our editorial operations must also operate within ESPN’s journalistic standards,” the network said in a statement. “We have worked hard to ensure that our recent NFL coverage has met that criteria. Bill Simmons did not meet those obligations in a recent podcast, and as a result we have suspended him for three weeks.”

There is this thing in America that is called the 1st Amendment. It guarantees freedom of speech. Does Bill Simmons get protection under this Amendment here? Apparently not. My wife and I have been debating this since I got wind of the suspension and her argument (a valid one at that) is that when you do speak your mind openly you can not be legally punished for it but there may be punitive damages by your employer. She is right. I am a public school teacher for a very large school district. If I spouted off, like Simmons did, to my students I would probably be punished in some way, and at the end of the day I would expect to be. It does not mean that I will be arrested but my employer has a right to protect the people they serve, in my case it is the students and the families of the school system who employs me. That’s the issue I have here. Bill Simmons’ job is to comment on sports and what is going on in all things sports related. His employer is ESPN-The Worldwide Leader in…Sports. He did nothing wrong in that sense. He commented on sports, like he is paid to do. He did not threaten anyone, he did not hurt anyone, he did not in anyway endanger any of the listeners who listen to his podcasts. He commented on a sports situation that he felt was handled very poorly. An opinion that is not uncommon across the country. 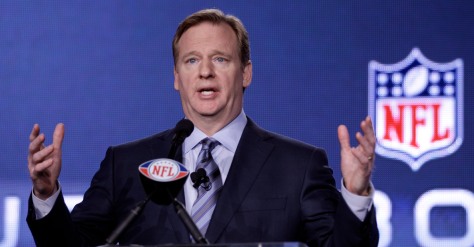 Why in fact was Bill Simmons suspended? Was it because he dropped the “F”-bomb a few times? No, his podcast prefaces listeners by letting them know it is for mature audiences and is usually free-flowing thought. Was it because he asked for someone to be fired? If the latter is the case, then we can fill the seats at the Super Bowl with people who feel Goodell needs to go away. No, this suspension comes down to one small issue: the almighty dollar. ESPN has a $15 billion television deal to showcase the Monday Night Football game each week. You simply need to follow the money trail here to see why Simmons is facing this suspension. There is no doubt in my mind that ESPN executives were trying to “protect the shield” by showing their zero tolerance policy towards anyone who is going to operate in a manner that will not coincide with their financial investment. Which is funny if you think about it. ESPN is doing more to protect the NFL than the commissioner of the NFL is doing. Again, Simmons is suspended for three weeks. Ray Rice was originally suspended for two games and Stephen A. Smith only received two weeks for his foot-in-the-mouth implications against Janay Rice. That’s not right. I know, I know, Ray Rice is suspended indefinitely but it took TMZ to release the video and the public outcry to get to that point. And let’s remember one more thing here. The Ravens released Rice before he was suspended again by the league. Goodell acted after one of his owners acted. That’s why people like Simmons are outraged and rightfully so.

It’s a sad state of affairs when someone whose job is it is to comment on sports gets in trouble for commenting on sports. Bill Simmons did not disparage ESPN in any matter. He called out the actions of the NFL Commissioner. He does not work for the NFL. If he did I would be more inclined to agree with his suspension. Bill Simmons crime here is that he works for the “Worldwide Leader” and they don’t want anything to get in the way of their bottom line. That is the true crime here. Once again the almighty dollar is getting in the way of everyday life, and in this case it has blocked freedom of speech.

6 thoughts on “ESPN Strikes Back”