It’s that time boys and girls. Fantasy Football drafts have started across the nation. So today marks the first of Wayniac Nation’s Fantasy Football Reports. Each week, we will bring you insights, good starts, better sits and a smorgasbord of information to help you look like a fantasy football genius.

I know what you’re asking yourself. There are millions of fantasy football resources out there, why listen to The Wayniac? It’s justified. What makes me any better than any other fantasy expert? Let’s take a look at the ol’ resume and perhaps I can convince you that out of all the fantasy geeks out there, I am one of the biggest.

I am entering the 17th year in my Nitro League. That’s right, folks, 17 years with essentially the same original owners in a 10-team league. This league is so old it started back when you had to tally scores by hand. We don’t really have bad teams as it is ultra-competitive and has always been more about the trophy and bragging rights than the money. I have been to the last two back-to-back championship games and if I didn’t run into Peyton Manning, Adrian Peterson and the Junior Mafia, I would have two wins in a row. I have been in my other league, The Old School Football League, for 10 years. It is a 12-team league that has had essentially the same owners for the bulk of its existence as well. Over the past three seasons, no team has more regular season wins or points than my Fightin’ Blue Hose. Unfortunately, although I have finished in the money all three of those years, I have no rings to show for it as a major injury has derailed me seemingly every Week 15 in the semi-finals. It is your typical scoring league and in the history of the league only four times has a team broken the 200 point barrier. Three of those times were the Fightin’ Blue Hose. Last year I joined a third league run by Nomi the Greek and has every member of The Thread in it. The Englishman is the reigning champ in his first year ever of fantasy football.

Am I bragging a little bit? Sure, but I also want you to know that I do have an idea about how this fantasy thing works. I also bring you insight to how to succeed in a 10-team league as well as a deeper 12-team league. My panel of Wayniac Nation Fantasy Experts that I have put together is an All Star selection of people who I have run in fantasy circles with for nearly the last two decades.

Later this week, we will bring you insight to key players and busts to look out for, but first let me take a selfie.

No, seriously, folks, before we get into player breakdowns, we need to first answer THE TOP FIVE BURNING QUESTIONS COMING INTO THE 2014 FANTASY FOOTBALL SEASON.

5. When will the first non-running back come off the board?

This is an entirely new fantasy football era and the conversion from running back heavy teams to dominating through the air is complete. That being said, AP, Matt Forte, LeSean McCoy and Jamaal Charles will be the first four off the board (in no particular order). I personally don’t see a running back worth taking after the Big Four until the second round. Wide receivers, especially in PPR (point per reception for those not savvy) formats are way more valuable in the right system, and the way quarterbacks amass forty to fifty point Sundays makes a few first round worthy.

Of course not. Peyton Manning set records last season and had the single greatest season for a quarterback in fantasy and NFL history. It’s a lot like watching Keanu Reeves in Bill and Ted’s Excellent Adventure. You knew no matter what, you were watching the best he had to offer and nothing would ever again match that. Now, I’m not suggesting Peyton Manning numbers are going to fall off the way Keanu Reeve’s acting abilities have (Johnny Mnemonic, anyone?), but you do have to tame your expectations. While the Broncos lost Eric Decker when he unforgivably signed his career away to the New York Haven’t Had a Legitimate QB in a Decade Jets, they brought in an even better Emmanuel Sanders so the offense won’t miss a beat. They did also bulk up their defense with big names like Aqib Talib and DeMarcus Ware. That means more ball control and less shootouts for Manning. While his numbers will be down to human level, he is still the best QB fantasy has to offer and may even be in consideration for the fifth overall pick. Plus, he’s already a better actor than Keanu Reeves.

3. Who do you consider at running back once the big four are off the board?

I have already said that after McCoy, Charles, Forte and All Day AP are gone, I really feel this is the season that running backs get put on the back burner. But if you insist on being a traditionalist (also known as The Guy Who Finishes Last) and feel you must pick an RB in the first round then there is only one choice. As much as I love Marshawn Lynch and his Beast Mode, I don’t feel he is first round worthy this year. That is based on his past. He held out a few days for a bigger contract and made it open that he considered retirement. When he wanted out of Buffalo, he played like he didn’t care, and with Seattle’s deep arsenal of RBs, we may easily see that down season from Lynch. So if you must take an RB, you go with Eddie Lacy. The guy is a total beast and will have a full season with Aaron Rodgers for the first time in his career. This is a kid with potential for a 2,000 total yard season in that offense, however, I don’t think that season is 2014. 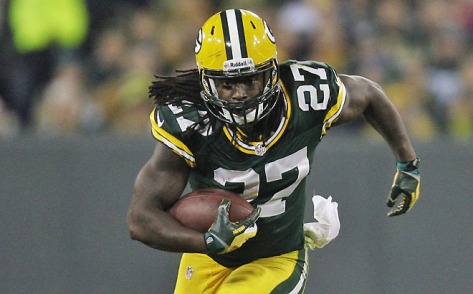 2. Where is the best place to look for top fantasy advice?

Wayniac Nation, of course. Seriously though, the simple answer is your notes. If you are reading this blog, you are most likely competitive enough that you are beyond the casual twenty dollar “for fun” fantasy league. If you aren’t already, you need to become your own fantasy expert. The best thing to do for starters is to grab a few friends and do some mock drafts on (I can’t believe I am saying anything positive about these shlubs) ESPN. Secondly, do some research on ADP (that’s the average draft pick of a specific player for you newbies). A lot of leagues will have a draft lottery weeks before the draft. Once you know your spot, you can begin researching what players are most commonly going in that location. You can also do your own mock drafts from that slot and practice, practice, practice until you have the team you want. Lastly, and this comes from my own old school mentality, take notes. Make a list of your Top 20 at each position and cross them off as you go. Colin Kaepernick is in everybody’s Top 5 quarterbacks, but this guy would never start on my team. So, my list is going to be very different from other “experts”. So should yours. Nothing sucks more than when you are unprepared and the guy right before you takes the player you had queued. If you are properly prepared with your own notes, you don’t need to spend your minute thirty googling “fantasy advice”!

1. Ok, so who is the first overall pick?

This is a tough question. My Hongbits team in The Nitro League has the first overall pick, so this is something I have been contemplating for some time. All of the big four (again: Charles, Forte, McCoy and AP) are complete studs, yet they all also come with injury risk. All four play for very questionable offenses. Charles’ Kansas City Chiefs are notorious for having a terrible season when following a strong one. While everyone sees Chicago as a legitimate contender this season with a high octane offense, one must remember that Jay Cutler is still at the helms. Was Chip Kelley’s offense for real or was it a flash in the pan like the Wildcat that defenses can now prepare for? And who the heck is going to be the quarterback in Minnesota, Matt Cassell?

That being said, I think there are two ways to go with this pick. If you want the home run hitter,  the guy that is capable of getting you 50 points in a game by himself, you go with Charles. He is lightening quick and is a lock for 50 receptions, but can be relied on for over 60 like last season. But if you want to play it safe, the answer is simple. No running back has been more consistent with less talent around him than All Day Adrian Peterson. His lowest touchdown total over the past five seasons is ELEVEN. Last year, despite missing two games and abysmal quarterback play, he still ran for over 1,200 yards. He is not your PPR dream back, but if Teddy Bridgewater takes over, you can be sure there will be a ton of dump offs and last year’s change of pace back, Toby Gerhart, is gone to Jacksonville.

So which direction will I go with my first round pick? I’ll let you stew over it, so be sure to check in weekly for up to date Fantasy Football advice this NFL season!

6 thoughts on “The WN Fantasy Football Report: 5 Burning Questions for 2014”