Guess who’s back? Back again? Tiger’s back, and Dun-ten. Wayniac Nation’s golf expert, Mike Dunton (@dartbus1521) returns with a look at what to expect from the return of Tiger Woods. Does he win this weekend? Can he get to 19 majors?

Tiger is once again about to prowl the PGA tour, and nobody is happier than I am. Golf has lost its swagger since Tiger announced he had to repair a bulging disk in his back over two months ago. When Tiger shocks PGA Nation and wins his comeback tourney this weekend, the golf world will once again be his.

Golf’s ratings have plunged faster than Free Fall at Six Flags. Look at the ratings for this year’s first two majors alone. Bubba Watson won his second Masters to a 7.8 share in the ratings, down from 10.0 last year. Martin Kaymer ran away with this year’s US Open, but so did the viewership. According to Bleacher Report, the ratings were down 46% from last year. There is only one reason for that…

I have watched Tiger’s every move on and off the golf course since that signature 1997 back nine at The Masters. Golf fans witnessed a four year run that we may never see again. Then the bottom fell out during his infamous 2009 Thanksgiving night. That fateful event occurred when golf was at an all time high in popularity, and the ensuing plunge would be devastating.

Ever since then, the golf world has been waiting for Tiger to reclaim his place atop the rankings.  Don’t get me wrong, we have seen him win PGA Player of the Year, numerous tournaments, and snag Lindsey Vaughn. What Tiger, and the rest of us are waiting for now is that elusive 15th major that puts him one step closer to Jack Nicklaus.

The big question posed by many pundits is if Tiger is coming back to soon from this surgery. Tim Finchem, Commissioner of the PGA, certainly feels the time is right. It’s the Tiger effect as he simply commands viewership and drives ratings through the golf roof. Let’s go back 20 years, the year I graduated high school and really started paying attention. In 1994 the final two rounds of the Masters received an 8.7 share. That was the lowest the ratings would hit until this year. In 1997, Tiger’s first green jacket and first major, the ratings hit an all time high of 15.8. The numbers never dipped below an 8 again until this year. Coincidence? Love him or hate him, rooting for him to win or implode, people want to watch Tiger. I can guarantee you that this week’s ratings of the Quicken Loans Invitational will be higher than last year if that red Nike shirt is standing in the middle of the fairway on the back nine on Sunday. If he is in contention on Sunday, they may be higher than this year’s Masters. Hell, who am I kidding? They are going to be high as long as he makes the cut on Friday. 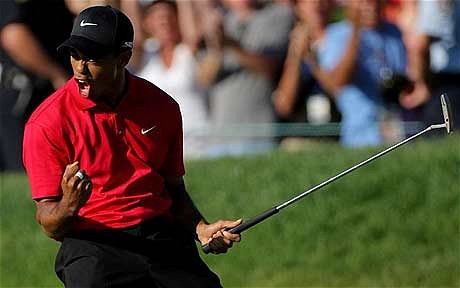 Can Tiger win? It’s crazy to think that a guy coming off of herniated disk surgery is going to have an immediate impact, especially a 38-year old golfer who has been trying to find his swing.  So I guess I’m a little crazy because I think Tiger wins this weekend. This tournament benefits his foundation so he will want a good showing. It is played at Congressional Country Club, a place where Tiger has won twice in the past five years, so he knows the layout. Add to it that this will be Tiger’s first chance to compete in several months (and we all know that he is an ultra-competitve nut) we can expect to see his best.

The wildcard will be Tiger’s confidence in his back holding up. Tiger has one of the most violent swings of any golfer, and his body has paid the price for this. His knees and back have taken a beating over the years and this latest time away may have been an eye opening experience for him. Tiger is best when he plays under control and leaves the driver in the bag.  We love hearing the booming sound when his driver makes good contact and the gallery yells “Baba Booey” or “Get in the Hole”. But Tiger can hit a 3 wood farther than most elite golfers can drive  the ball so maybe it’s time to start keeping the boom-stick in the bag. A more controlled approach means more fairways. More fairways means no bad lies, no thrashing out of the rough, and no added stress on the back.

Tiger’s biggest advantage is going to be around the greens. All we have heard about is that he was chipping and putting for almost 2 months. That has to be great for a guy who used to dominate on and around the greens. If he finds that touch and putts like we know he can, it could be a return to the Tiger of old who would dominate tournaments with his trusty putter. That is how he is going to get to 19 majors: his uncanny ability to putt and chip and play shots so precise around the greens that he leaves us in awe, as if we were watching a perfectly executed Steven Spielberg film.

I know I sound like a Tiger homer, but how can you blame me when I grew up watching a guy dominate a sport? I want him to succeed. I want him to play for 10 more years and contend in everyone of them. And I want those five majors. That’s not too much to ask for, right? The quest for 19 officially starts this weekend at Congressional because it is all preparation for The Open Championship at Royal Liverpool in three weeks. And we all know who won the last Open Championship played there.