The DII Women’s Soccer Championship bracket was released on Monday and the road to Pittsburgh, Pennsylvania officially begins Nov. 8.

The bracket is full of regulars that should make their presence felt deep into the tournament. All eight teams from the 2017 quarterfinals — Central Missouri, Carson-Newman, Mercy, UC-Colorado Springs, West Chester, West Florida, Grand Valley State, and UC San Diego — return for another run at the national championship. Let’s take a look at a few other teams looking to leave their mark. 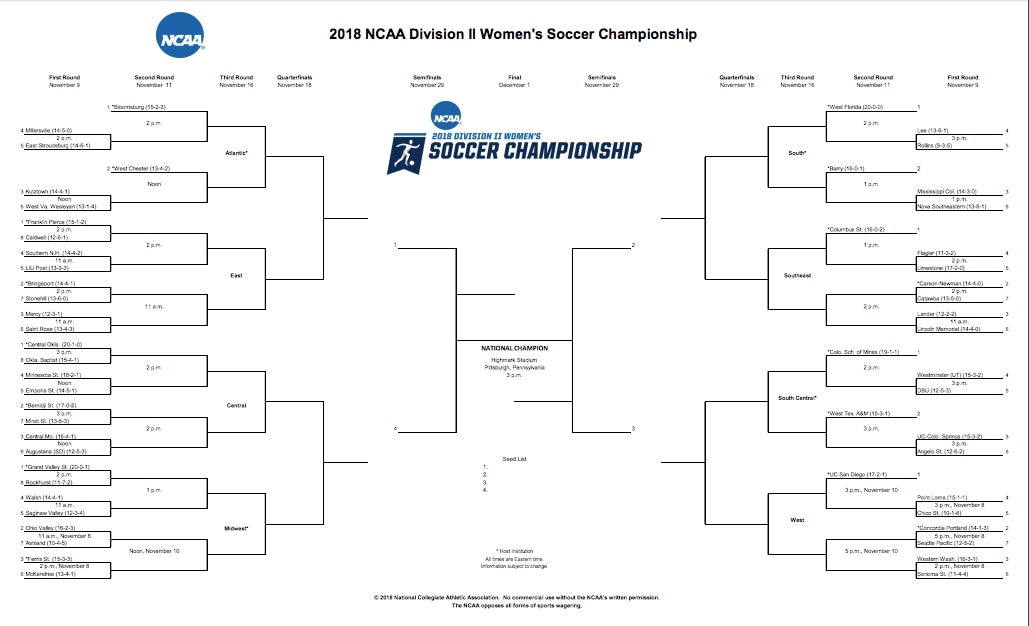 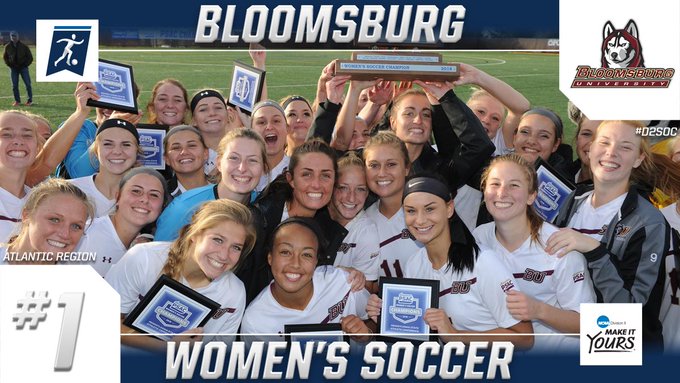 The Huskies return to the NCAA tournament for the first time since 2010 on the heels of their first Pennsylvania State Athletic Conference title since 2002. Now, the Huskies are the No. 1 seed in their region, earning a bye while they await the winner of Millersburg and East Stroudsburg. While Bloomsburg defeated East Stroudsburg a second time for the PSAC title, Millersville handed the Huskies one of their two losses this season.

Bloomsburg doesn’t have a star scorer, getting it done with a group of players able to put it in the net. Midfielder Allie Barber leads the way with six goals but has plenty on the Bloomsburg attack to help. The spotlight will be on redshirt-sophomore keeper Jenna Hawkins, who led the PSAC in GAA this year with a microscopic 0.41 mark. She hopes to add a few more to her PSAC-best 12 shutouts before it’s all said and done. 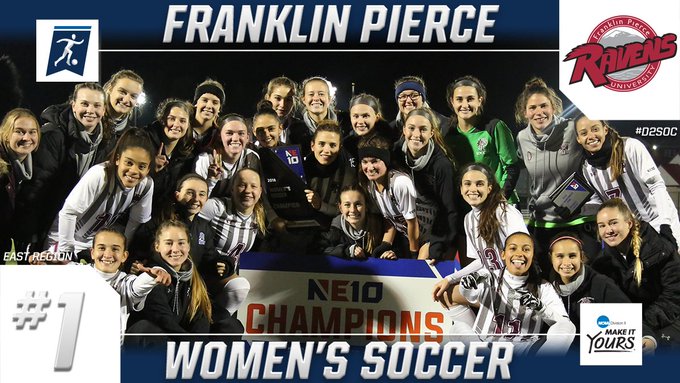 Head coach Jonathan Garbar took over last year and the Ravens returned to the NCAA tournament for the first time since 2010. That was a long drought for Franklin Pierce, a team that went to 19-straight postseasons while winning five national championships —tied for the most ever — between 1992 and 2010. This time, the Ravens are the No. 1 seed and expectations are higher.

MORE: Programs with the most DII women’s soccer championships

The Ravens have a pair of prolific scorers to keep tabs on. Veronica Marques and Nathalia Maria da Silva are dangerous, combining for 27 goals in 18 games this season. Marques is versatile, able to dish it out with the best of them, her 10 assists tied for second in the Northeast-10. In net, freshman Casey Kane will have her first postseason run but showed more than capable this season posting eight shutouts in the Ravens 15-win season. 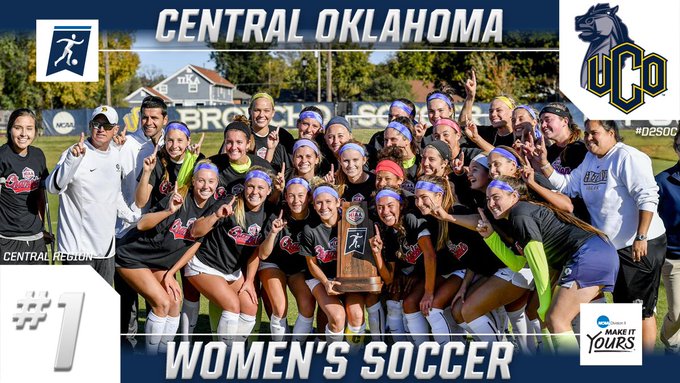 For the past eight consecutive seasons, Central Missouri reigned supreme in the Mid-America Intercollegiate Athletics Association. The Bronchos ended that run this year, behind a dominant 20-1 record. You can be sure all eyes will be upon them, as the Bronchos return to the tournament after a down 7-10-2 2017 season.

They certainly have plenty of weapons to make a deep run. Katie Killion led the division in scoring with an astounding 27 goals, but she also has Asha Haile on her side, who put in 15 goals herself. Taryn Kedzior — the MIAA Freshman of the Year — anchors one of the best defensive lines in DII women’s soccer, one that has allowed just seven goals all season. It won’t be easy, just to get to the quarterfinals there is a possible matchup with the defending national champions. But this is a Bronchos team that has already had a historic run to its first MIAA title, so why not add some more to the record books in November?

Who doesn’t like an underdog? The Rambelles made it to the postseason on the heels of an automatic qualifier, winning the program’s first-ever Lone Star Conference tournament. They knew the stakes were high then, and they delivered in an NCAA tournament tune-up.

“This was the only way we were probably going to get in, so we had that in the back of our mind for the last couple of weeks,” Angelo State head soccer coach Travis McCorkle said. “The team is playing at a high level right now, and we’re excited to have another game.”

Offensively, Trenadey Scott leads the way, scoring 17 goals this season. The Belles are the sixth seed in the region and open against a UCCS team that made it to the program’s first national semifinals last year. The odds may be against them, but that’s what makes the postseason great.

First round game to watch: No. 3 Lander vs. No. 6 Lincoln Memorial

While Rockhurst is one of the feel-good stories of the tournament, reaching the postseason on the heels of its first-ever Great Lakes Valley Conference title in thrilling overtime fashion, it is the Lander/LMU matchup that gets the final nod.

Lander is making its first NCAA tournament appearance in the history of the program, coming off the best regular-season and conference finish ever. Lincoln Memorial earned its spot in the tournament by capturing its first South Atlantic Conference title since 2007. The Lady Railsplitters had to beat an extremely tough —and reigning national runners-up — Carson-Newman to do so. Whoever emerges from this match may have Cinderella written all over them.