We’ll conclude “The Search For My Home Team” Saga in next Sunday’s exam results from the Divisional Round. For now let’s breakdown the first part of your Sportsbook 102 Final, with the results from this Wildcard Weekend.

Although I didn’t give you any exam predictions or any reviews during last season’s Sportsbook 101 final, I feel a review of our principal strategy and rules taught during these last two seasons needs to be justified with this regular season’s unprecedented tank job by The House, with their deceiving hope of trying to completely sabatoge our Sportsbook 102 final exam gameplan. News flash….ain’t happenin’, Vegas.

As with last season’s Sportsbook 101 final exam, I won’t be giving you my predictions, but we will be breaking down the results per round, and we’ll dive into the 2nd Half action, with this Divisional Round Weekend. You will have to pick your three usual game bets (Side, Moneyline, & Total Points) per game, with the rest of these playoff matchups. Plus, you have to take one 2nd Half Side or 2nd Half Total Points bet with each of these four upcoming games. Got it? Good. Let’s go… 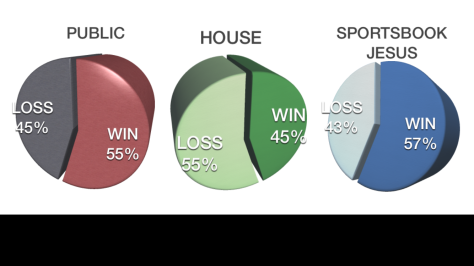 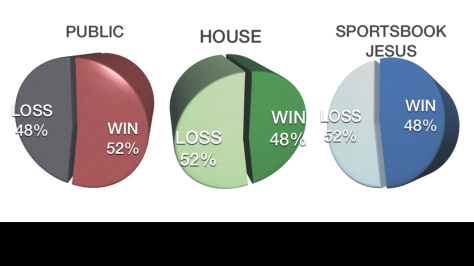 The House always wins…until you expose that fact in your Sportsbook 101 class, which in turn will yield a complete tank job, by The House during the following season, when you conclude your Sportsbook 102 class, just to throw everyone off the contrarian strategy scent.

Astounding. Over a decade of primetime trend analysis under my belt, and this is the first time The House has a losing record in both Side and Moneyline action.

An 18 percent drop into the red, by The House on side action, from last year’s 20-12-1 Side Record? 45 percent overall, and below .500 in every category? So what, you shaved a little more off the day games this season, just so you could orchestrate this smoke and mirrors losing season designed to discredit this class mantra?

I guess we’re all supposed to assume “The House always loses” will be the storyline of these eleven postseason outcomes, as well? Hmm, interesting. Let’s see, shall we?

After Saturday’s action the public put up a 1-5 mark. A People’s Favorite House Cross followed up with a House Favorite Special. The 51-41-4 public went 1-1 on Side, 0-2 on Moneyline, and 0-2 on Total Points.

With 59% on the RAIDERS +175, that was just never going to happen as far as our school of thought is concerned. Plus, our rule of Moneyline action revealing the true people’s action with small lines, like 4 or less. There might have been more overall cash on Oakland, if you combined their Side and Moneyline totals together, right? Technically siding with the public on a People’s House anything, but not really with small dogs, remember?

You all should have assumed that if I was taking the TEXANS -4(-105)(due to Vegas roughly needing a double-digit cushion to guarantee that the Oakland Moneyline would never have a chance of even coming close to hitting), that I was going with The House Total Points(OVER 37.5) wherever it ended up, so that’s 3-0 for us in that one.

Then, you all obviously knew the play was the House Special SEAHAWKS -8(-105) & UNDER 45.5 for me. 6-0 day. At least, 5-1, if you want to assume I’d talk myself into a Double Over Wildcard Day, which there is a case to be made, being that the first game had a House Over…but The Golden Rule of The Primetime Domino Effect trumps all in playoff action with regards to Total Points, in my experience.

So, I’m 6-0, really. Come on. Let’s be real here. Not one of you in this class should have missed that Seattle HFS. That UNDER 45.5 was the unquestionable play of the weekend. Plus, a Public Side TEXANS -4(-105) made a House Side SEAHAWKS -8(-105) inevitable to avoid a Saturday Side Combo of PUBLIC/PUBLIC. You all should have gone 3-0 in that one.

Let’s see if the public can hang with my 2-0 Side right out of the gates. 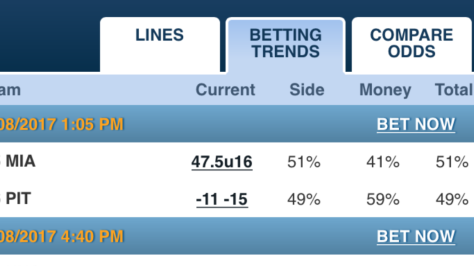 The public went an identical 1-2 in game one of the afternoon, with their lone hit being a STEELERS -650 favorite Moneyline. 1-2 on the Side, 1-2 on the Moneyline, and 0-3 on Total Points going into the last test question of the weekend.

2-7 overall before the New York @ Green Bay game. I’m 9-0 up to this point. With the public winning the Saturday early game, I was banking on a Side Flip in the Sunday early game. 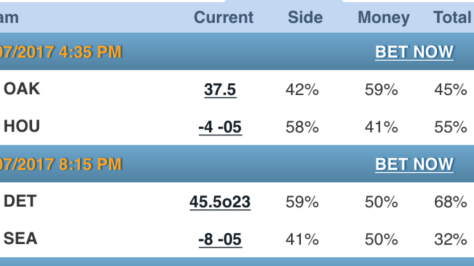 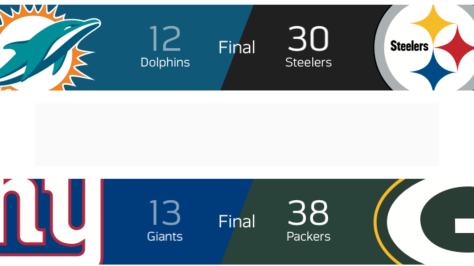 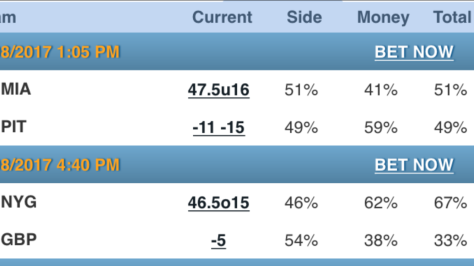 And being that I took the New York Moneyline with the people at 62 percent, I wasn’t thinking of taking a Public OVER 46.5, if I had already decided weeks ago that I was taking the Giants in this wildcard round, with the people ending up agreeing on my GIANTS +187 hunch. So, it was clearly a Sunday Total Points Combo of UNDER/UNDER that we were rooting for to hit.

And if the Saturday Total Points Combo landed OVER/UNDER, it was likely not starting the next day with another over. So, I thought it was possible that the Sunday Total Points Combo could have ended UNDER/OVER with the OVER 46.5 hitting in the late Sunday matchup, but even if the public ended on the PACKERS -5, then I was obviously still taking The House with Total Points, with 62 percent of the people riding with me on the New York Moneyline. Right? Right.

So, I would have gone 0-3 with that People’s Favorite House Pick hitting in the last game of the weekend, but the emotional hedge was well worth it. I even made a 3-Team Moneyline Parlay that only needed a Giant win to cash out a 3-to-1 bet, just so I could hate them even more than I already do, when I knew they’d blow it for me.

Plus, I wanted to crush them in Dallas by twenty next week, but I failed to realize that the receiving corp decided to “Memo Paris” themselves with that Miami booze cruise, before they even had the option of Round 3 versus my Boys. Did anyone honestly think New York was going into Lambeau and pulling out a win after that moronic decision was made this last week?

Really, OBJ? You’re offseason is a month away. Y’all just had to checkout mentally, before the first postseason weekend? Was the boat not available the week after the Super Bowl? Genius. Ya know what? I hope that becomes a Giant team tradition from here on out before every postseason appearance. It can only lead to positive results. Please, do it next year. Oh, wait. That’s right. You won’t be in the playoffs next year. My bad.

How dare you, Vegas. You all should be ashamed of yourselves to insult our intelligence like you have this regular season. 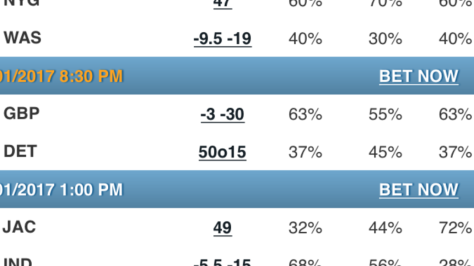