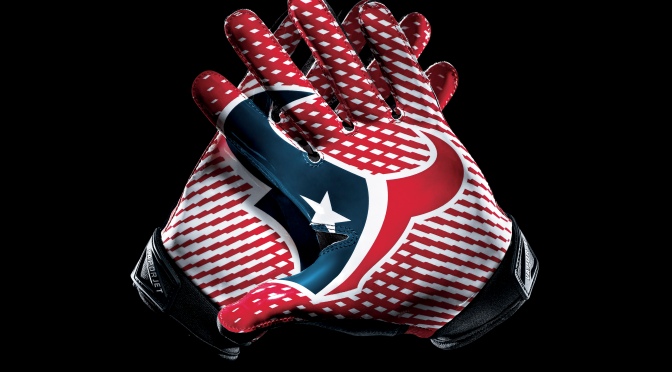 It’s not easy being a Houston Texans fan. Don’t get me wrong, I have stuck with them through two-win seasons, and I will continue to do so through their 9-7 seasons. The simple truth is that there waas nothing surprising about last night.

We are who they think we are.

Like I said, there was no doubt in my mind that Jacoby Brissett could get his first win last night against the Texans. They have historically played poorly in Foxboro. I think back to that 2012 season when they went in to New England at 11-1 and were completely annihilated 42-14. Later that season, in the Divisional Round of the AFC Playoffs it was more of the same as Brady picked apart the Texans 41-28. And that, folks, was the Texans BEST season in their brief history.

Nomi the Greek wanted to know why he shouldn’t pick the Texans. They were only -1.5 favorites and, after all, it was the Pats third string quarterback (by the way, if you still haven’t read my thoughts on Brady’s greatness, they are getting stronger each week of this season. Go ahead, take a look, I’ll be here when you get back: READ HERE).

Anyway, here’s what I text him (I left the time stamp in tact so you would see I didn’t alter it): 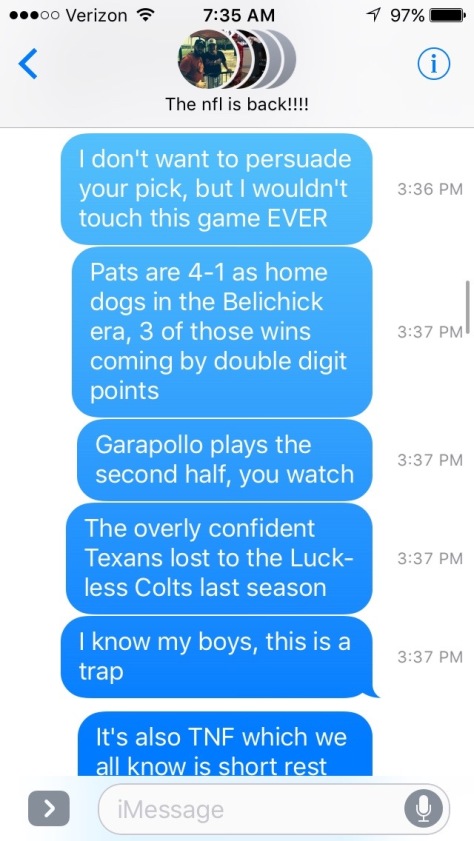 Ok, so Garoppolo didn’t play (and my phone autocorrects his name very awkwardly) but you see the gist of these things. Texans fans, who have been there, know. We just know.

But we know. They just don’t get up for prime time, big games. It’s what will always make the Texans a good team, but until they prove they can hang, they simply can’t be considered great.

Just take a look at the Texans three AFC South Championships. 2011 was the year Peyton Manning went out for the season. 2012 was the year that Andrew Luck was a rookie and the Colts had lost a ton of their talent and were a team in transition. Last season, at 9-7, Luck missed nearly the whole year. The AFC South is annually one of the most awful conferences in the NFL.

This isn’t pessimism or being down on my team after a loss. This is fact.

Go back to that 2011 season. The Texans were 10-4 and headed into Indy, finally looking to reverse the curse and win their first game in the franchise’s history in the house that Peyton built. It was a layup. Manning was hurt. The Colts were 1-13. They were playing for Andrew Luck at this point. Dan Orlovsky — the same quarterback who ran out of the back of the end zone on a designed roll out the season prior — was at the helms. The 10-4 Texans lost. It was embarrassing.

The Texans have strived in prime time a few times, but the majority of the times it seems to be against the Cincinnati Bengals. If you sit here and try to tell me how good the Bengals have been the past decade because of their record on paper and their playoff appearances, I’m ready to fire back with 20 to 25 reasons as to why they are the most marginal “good” team in the NFL. The reason the Texans constantly beat the Bengals is because they are the same team. A constant let down when it matters most. The Texans, luckily, just seem to be slightly less of a let down than the Bengals when they face off.

Oh, and the biggest takeaway from last night is OB has no faith (and seemingly rightfully so) in Brock Osweiler. Four third downs in the first half saw them handing the ball off to Lamar Miller. That’s Gary Kubiak football. That’s gutless football. That’s not what we have come to know as Texans fans under the F-bomb dropping Bill O’Brien era of Texans football. He doesn’t trust Osweiler because he looks lost in the system. Four of his completions in the first half were simply awful and he was bailed out by DeAndre Hopkins on three of them. He keeps putting Nuk in those positions, he’s going to get his head knocked off.

I’m not mad at them, I’m not disowning them. Quite honestly, I still think they finish 9-7 or 10-6 and win the abysmal AFC South. I hope for yet another matchup against the Bengals, so we can make it to the second round. But as a fan who has followed them whole heartedly since David Carr took the first of his record setting sacks, I have become numb. I need them to prove to me that this is a team that can rise to the occasion. Until they do, I will never believe Super Bowl hype.

But I will blindly cheer my butt off every game for it.