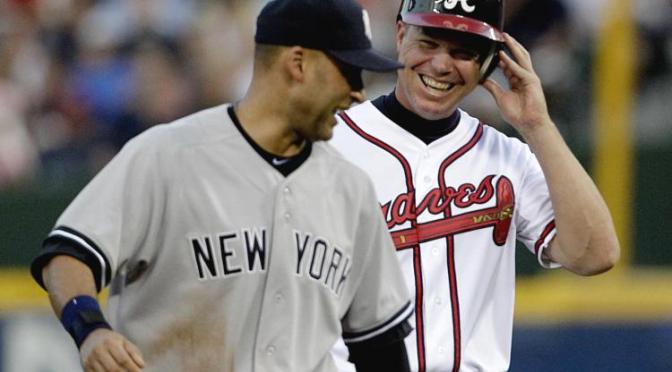 This evening from State Mutual Stadium, the Rome Braves host the Charleston RiverDogs in the first round of the South Atlantic League playoffs. While it highlights one of the biggest turnarounds in the minors — the Rome Braves went from a 27-42 sixth-place record to the hottest team in the Sally — it also features two systems that are successfully undergoing the rebuild process in seemingly polar opposite styles.

The Braves and Yankees farm systems are sending a combined nine of their affiliates to the minor league playoffs. Considering these are two teams that made the commitment to look ahead to their respective futures, it speaks volumes about the jobs they are currently doing with their youth. The Yankees’ Scranton/Wilkes-Barre RailRiders, a team armed with Gary Sanchez, Aaron Judge, Tyler Austin and Luis Severino at different points of the season, were the only 90-win team in the International League this season. The Gwinnett Braves, armed with many of the pitchers they have acquired in their high-profiled trades, are also headed to the Triple-A playoffs (despite a sub-.500 record) as South Division Champs.

Lower down the ranks, the Mississippi Braves — who had arguably the three biggest names in the Braves system with Sean Newcomb, Dansby Swanson and Ozzie Albies — are also playoff-bound as the Southern League South wild card team. The Trenton Thunder in the Eastern League, featuring many Baby Bombers expected to contribute on the big league level within the next two seasons, reeled off 87 wins en route to their wildcard birth.

The GCL Braves, Tampa Yankees and Staten Island Yankees are all playoff bound as well. These teams are important because they are all on the lower levels of the minor leagues. These are the teams featuring many of the recent draft picks of both organizations, thus showing that those draft picks are excelling in their newfound roles.

Then there are the Rome Braves. Rome is filled with talent from top to bottom, so it was surprising that they had such a slow start. Their rotation was filled with elite pitching prospects, featuring four former first-rounders: Max Fried (San Diego’s 2012 first-rounder acquired in the Justin Upton trade), Touki Toussaint (Arizona’s 2014 first-rounder who came over via trade) and the Braves own 2015 first-rounders Mike Soroka and Kolby Allard.

All four needed to step forward and prove that they had the makeup to take the next step. Combined with the breakout of 2015 seventh-rounder Patrick Weigel (now in Mississippi) and the emergence of Ricardo Sanchez, the Rome Braves rotation grew stronger as the season grew on, proving they were second to none.

Offensively, the second half has been all about the Braves’ third 2015 first-rounder, Austin Riley. Riley enters the playoffs amid a 19-game hitting streak and each and every one of those hits seems to have come in important situations, as he has plated 20 Braves over that span. Riley’s first half was worrisome, as their biggest slugger on the pipeline slashed .252/.299/.372 with just three home runs and an 86-to-17 strikeout-to-walk ratio over 242 at bats. The second half has seen a different Riley, as he has cut down his strikeout rate (striking out 61 times and walking 22 over 253 at bats) while raking 17 home runs and slashing a very impressive .289/.348/.581.

Riley still has some work to do defensively, but speaking to him you immediately see that he is a 19-year-old that has an understanding of what he needs to do to get better.

As already mentioned, the Braves and Yankees re experiencing a rebirth that has led to a lot of excitement going on down on the farm. Their methods of getting their are on opposite ends of the spectrum.

The Braves cleared house, starting at the top when they got rid of the Frank Wren regime — tearing down the old Braves Way — and brought in first John Hart and then John Coppolella to attempt to right the ship. They immediately began getting the big contracts off the books, taking the blueprint that teams like the Chicago Cubs and Houston Astros used — quite successfully at that — before them.

The Braves mold was a broken one, and it was time to burn it down and start a new one. Their firing of Fredi Gonzalez really took the team in a new direction. It shouldn’t come as a surprise that Brian Snitker, former manager of the G-Braves with a familiarity of coaching up young talent, has this team performing well above expectations. He essentially has a team overpopulated with Triple-A talent a mere 12 games under .500 and currently one of the hottest teams in the National League.

The Yankees could never afford that, both from a financial standpoint and fanbase. Even in the late-80s and early-90s, the expectations of the fanbase were always lofty. A roster barren of overpriced superstars would never cut it in New York. Added to the fact that the contracts of the likes of CC Sabathia, Mark Teixeira, Alex Rodriguez and Jacoby Ellsbury were so astronomical it made them nearly impossible to move, the Yankees quietly began to rebuild through the draft beginning in 2013.

For more on the Yankees and Braves rebuild, read my full article by clicking on the link below: