I’m old. I know I am old because working in the two industries in which I do — writing and then the restaurant business to make that extra jingle — I am surrounded by those younger than myself. I find myself often saying things that must sound like a foreign language as I have to explain what the heck I am talking about, like most recently when I interviewed Luke Dykstra — Son of Nails — and Wally Backman weeks apart and tried to explain how cool that was. I guess you had to be there. In 1986. Like I was.

Another one of those things was the USFL.

Look, I don’t talk politics. The primary reason, to be completely honest with you, is that I don’t understand them. I mean, I took political science like the rest of us do in college, I understand what politics are supposed to be, I just don’t understand U.S. politics and how we have gotten to the point where we have to choose between two reality TV stars as president. I lived through Ronald Reagan, and I remember the stir it caused when an actor became president the first time.

That’s why I talk sports. And when sports directly effect one of the presidential candidates negatively, well then you can cross that candidate off my list.

I loved the USFL. I grew up right down the road from Giants Stadium — the old one, not MetLife — and with the invention of the USFL, we had football in the spring and the fall. Keep in mind, this was 1983 to 1985. The Mets and the Yankees weren’t playoff teams. Bridging that gap from Super Bowl to Labor Day Weekend was often laborious and the USFL solved that problem for most of the spurt.

I had the New Jersey Generals to watch. They drafted this Herschel Walker kid out of Georgia that had won the Heisman Trophy. He was robbed of the 1983 USFL MVP Award by Kelvin Bryant — who would enjoy success on the Redskins when the league inevitably folded — because his Philadelphia Stars dominated the league.

Walker ran for a league best 1812 yards with a league best 17 touchdowns adding on 53 receptions for 489 yards and another touchdown. Somehow, the Generals stunk. 66 year old owner J. Walter Duncan didn’t see the need to travel from Oklahoma to New Jersey to watch a bad team anymore, so he sold the team to someone who was close enough — and rich enough — to do so.

Trump went on a George Steinbrenner-esque sending spree, both on his own team and in the league. He pushed for expansion, which the USFL did, despite 10 of the original 12 teams losing a lot of money in the first season. Trump signed former NFL MVP Brian Sipe to be the Generals quarterback, signed on Maurice Carthon — who would win two Super Bowls with the New York Giants as the lead fullback for one of the most dangerous rushing attacks in the business — and keep Walker around from the NFL.

Trump’s Generals jumped from 6-12 to 14-4. Carthon and Walker both eclipsed 1,000 yards. The USFL was growing in competition to the NFL as well. Jim Kelly was MVP of that 1984 season, throwing for 5219 and 44 touchdowns. Mike Rozier became the second Heisman Trophy winner in as many years to bypass the NFL and head to the USFL. Reggie White was one of the top defensemen in the league on the Memphis Showboats (two fun notes: it is a proven fact that the Memphis Showboats are one of the coolest team names in history as well as the fact that Lex Lugor was a team mate of White’s). which is till one of the coolest team names of all time. Steve Young was gunslinging, as was future Super Bowl MVP Doug Williams.

1985 would see the third consecutive Heisman Trophy winner head to the USFL over the NFL, as Trump signed Doug Flutie to run the Generals offense. Herschel Walker ran for 2,411 and 21 touchdowns as the premier player in the league. The Generals would once again be ousted from the playoffs in the first round, as the final championship game would be played on their home turf in the Meadowlands.

It was always about Trump though. How much money would he spend? There were rumors from day one that he had a deal with Don Shula in place to coach the Generals and a deal with Lawrence Taylor to join the Generals when his contract with the Giants was up.

Many felt that Trump was using this as free advertising, stealing the spotlight and making millions in the world of Trump despite losing money with the Generals and the USFL. The rumors were that he wanted an NFL franchise, and much like the movie Semi Pro, he hoped enough teams would fold and the ones remaining, i.e. Trump’s Generals, would merge into the NFL much like the AFL and ABA did back in the day.

He led the anti-trust lawsuit against the NFL, the one that did in fact deem the NFL a monopoly. It was also the same lawsuit that deemed that the NFL owed the USFL one whole dollar in damages (it was nearly quadrupled a few years later).

Trump was the one behind the USFL’s move to the fall to combat the NFL and he was the first to vote to cancel the 1986 season when he didn’t see enough profit in the long run (by voting not to play in the fall, it meant there was no team in the New York area. With no New York team, there was no TV deal. So in a matter of speaking, Trump did single handedly end the USFL). At the end of the day, the USFL had lost nearly $160 million, Trump estimating three million of his own.

Was Trump the lone factor behind the demise of the USFL? Of course not, but he was the most visible, and much like this current election, it is because Trump put Trump in the forefront every minute or every day. He had more money than others which created an imbalance in the league and forced other teams without money to keep up. There was no cable, there was no internet. You can argue that with both of these, the USFL would have made it’s own home and certainly would have had bigger revenue. While the annual attendance was in the average 20,000 zone, the first two championships eclipsed 50K while the third a final one finished right under at 49.2K. There was certainly an audience for the USFL.

I watched Steve Spurrier leaded Burt Reynolds Tampa Bay Bandits and their Bandit Ball style of play. I watched Jim Mora who would become famous for a playoffs tirade years later in the NFL, lead the Philadelphia Stars to consecutive title bouts. I watched the NFL get both angered and shake in their boots briefly from a league that actually had over 100 future Pro Bowlers and more than a handful of future Hall of Famers.

So, this Election Day, when you’re forced to pick a candidate, keep the USFL in mind. Remember that Trump could have saved the USFL, but may have in fact let it crumble all by his lonesome. At that point the choice will be clear. 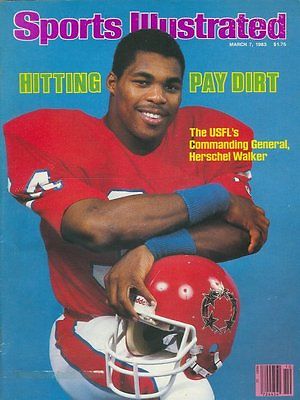 (information taken from Fox’s article 25 Things to know… as well as the 30 for 30 Small Potatoes: Who Killed the USFL)