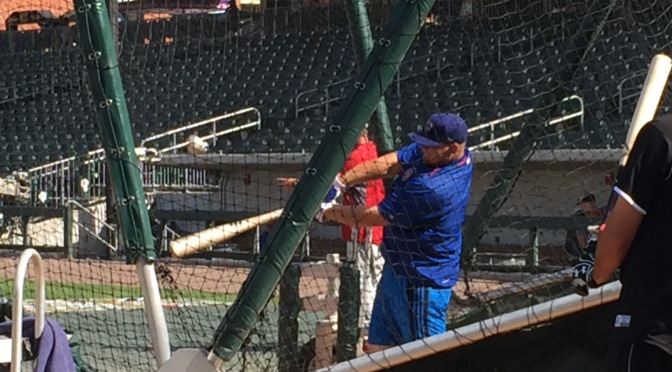 Hitting has never been a problem for the Chicago Cubs prospect Dan Vogelbach. He’s done it quite successfully since the day he was drafted. This year, it has been business as usual as Vogelbach is enjoying an All-Star season that saw him as the starting first baseman for the Pacific Coast League Wednesday night in Charlotte.

Vogelbach was a second-round pick in the 2011 MLB Draft. He could easily be Kyle Schwarber’s doppelganger, standing at 6-foot and 250 pounds. Also like Schwarber, Vogelbach has a pretty lefty swing, but throws right-handed. Vogelbach has hit for average with excellent strike zone awareness over the course of his six years in the pros.

Despite having that power hitter’s frame and build, Vogelbach has always been a hitter, using all fields to get on base anyway he can. His career-high in home runs may surprise some people in being merely 19 back in 2013. That may be changing.

Vogelbach already has 15 home runs on the 2016 season and is on pace to put up some of those power numbers some people — including himself — always knew where there.

“I have always had power,” Vogelbach said. “In the past, I just haven’t hit as many home runs as I wanted to or put up those power numbers I wanted to. My approach hasn’t changed at all. I put hitting first and power second. I think that I just found that middle, that I get a few more balls elevated and I drive the ball line to line.”

This season has been arguably Vogelbach’s best. His first year in Triple-A — after spending much of his career in A-ball with only 76 games in Double-A — has been an overwhelming success. He is slashing .312/.426/.547 at the break, with those 15 home runs and 18 doubles. He has a remarkable 65-to-55 strikeout-to-walk ratio for such a big hitter, showing he is in control at the plate. He hit successfully in his last six games before the All-Star Break.

“I have always had confidence in myself,” Vogelbach said of his success in the PCL. “I have always played with swagger, or whatever people want to call it. No matter how I perform, I always believe in my ability because I work hard and I trust myself. Obviously, you’re pleased when you play well. I can’t change anything, I don’t try to play too up or too down, I just try to play the same way.”

Vogelbach, of course, has had a slow journey to the majors because he is part of a Chicago Cubs system that is full of some of the most exciting young players in baseball right now, while experiencing one of the more phenomenal turnarounds in the game at the big league level. Instead of being discouraged that he is still awaiting his turn in Triple-A, Vogelbach is embracing every moment.

“It’s awesome,” Vogelbach said of being in Iowa and part of the prospect brigade readying for Chicago. “They’ve been nothing but good to me. They’ve been on the uprise. You know, they are right where they said they would be a few years back when they started building this. I just hope that down the road I can help them win a World Series. That’s my goal.”

Find out what else Vogelbach had to say. You can see my full interview at Today’s Knuckleball by clicking on the link below.