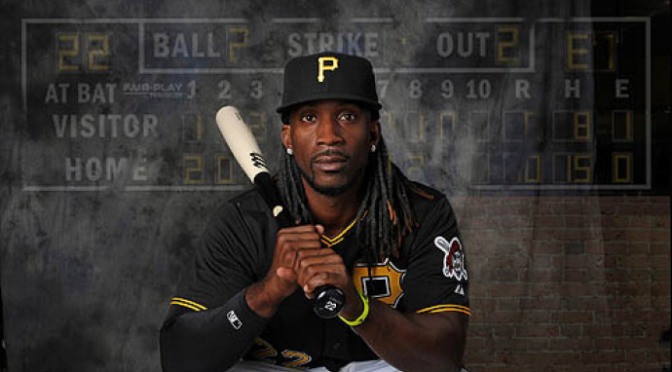 Fantasy baseball is here. I am in a head-to-head points league that gets pretty intense in terms of trades and transactions. We are allotted four keepers and unlike many other leagues, there is no time constraint on how long you are allowed to keep said player.

The trade market opens one week before the draft and over the past three seasons, my keen general manager (fantasy teammate) and I have thrown together a team that is young and full of keepers. This offseason, we had the toughest decision in our fantasy baseball lives.

I remember it so well. It was the first week of March, 2012 and my fantasy partner in crime calls me to tell me he had a big trade in the works. We would give up our third round pick in the draft for you and his sixth round pick.

I got all excited. A 24-year old fast kid with killer dreads and the ability to hit home runs? It was a no brainer. I mean sure, you struggled hitting the ball consistently (you hit .259 in 2011), but 20/20 potential? I was all in.

You see, in 2011 there was only one slot available in our league and both J.D. and I wanted a team. We decided to team up and take over the lone spot. It was a horrendous team. Aside from Prince Fielder, we had to chose from a bunch of 30-plus year olds. It was no wonder the guy who originally put together this mess dropped out of the league.

Anyway, we scraped through that season and finished 11-11 and made the playoffs. But we knew we had to get younger. You weren’t even one of our targets, but suddenly became the centerpiece to our squad.

Of course, in 2012 you went from young fast guy with the cool dreads to mega-superstar seemingly over night. You slashed .327/.400/.553 with an NL best 194 hits. You added 107 runs scored, 31 home runs, 96 RBI and 20 stolen bases to your sick season. You made baseball relevant in Pittsburgh again and made my fantasy team soar as well. We went 17-5 and went all the way to the championship game where we would have won if it weren’t for a ridiculous six-save week by Jason Motte.

By the way, that team turned that third round pick into Michael Morse.

The next season, you would become MVP. You would also become my favorite player in the game. I followed your life on Instagram. J.D.’s wife Stephanie became your biggest fan when you proposed on The Ellen Show and I felt like we got to watch you get married via the media and Instagram photos.

You became Cutch to the Pirates faithful, but to J.D. and I you became MCCLUTCH (my phone still autocorrects to that any time I start typing from all the big home runs you hit for us). It seemed like every time we were down, you came through.

It wasn’t just your athleticism, however. You brought cool back to baseball, not by being flashy or arrogant but that old school cool that the game missed. And you loved people. Habitat for Humanity. The dreads… you auctioned the dreads.

It was amazing. I had long hair for eight years in my life and when I cut it I felt a part of me had gone. I know you said the dreads had become cumbersome with all of the traveling and such, but man, what a life changer that was, huh? Of course you auctioned them off and made money for someone other than yourself. I’m glad you got to add a Roberto Clemente Award to the trophy case last year.

We vowed to get you back to that championship game, but alas we never did. I still can’t figure out how we didn’t last year, trading for Mike Trout and adding Carlos Gonzalez in his comeback season for arguably the sickest outfield in fantasy history.

This offseason, we needed a change. And when someone offered up their early draft pick for MCCLUTCH, we were faced with the worst decision in my 20-plus years of playing fantasy sports… trading my favorite player.

It’s when I truly really understood the business side of sports for the first time. We say it all the time, we write it in our articles, but until you are faced with the decision, you don’t really understand the magnitude of “what needs to be done.”

The day after we traded you, you went yard in the first inning against the Yankees and I text the guy I traded you to that you had homered. Old habits die hard I suppose.

So thank you for your years of service. And while you may no longer be my starting outfielder, you’re still the coolest player in Major League Baseball. I’m glad fantasy helped me realize that.

Good luck old friend. Tear it up every week this season except when you play us,