Well, bracketologists, for the first time in my life, I put no thought into my bracket. This March Madness, I simply clicked it and picked it. And that my friends is why I have the winning bracket.

Kansas is the team to beat in the South Region. I really like Melo Trimble’s name and Maryland is good, but I think Cal is also a tough opponent trying to showcase their talents to the world. 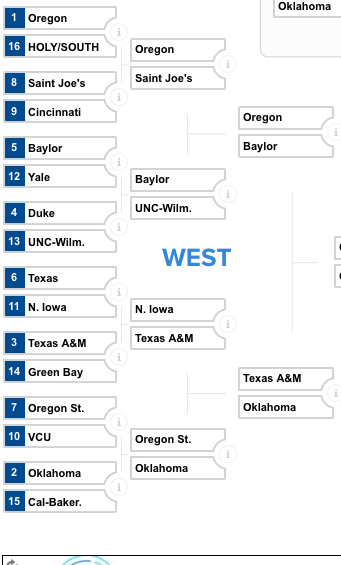 This was tough, which is why I left the winner hidden, for you guys to sweat it out. I really like Northern Iowa and think if a low seed made a run to the Elite 8, it is them, however I simply think those days are gone. It essentially comes down to Oregon and Oklahoma.

Oregon deserved the No. 1 seed and I think they will play to defend that honor. But then there is Buddy Hield. He is really good. Like rreeeeeeally good.

At the end of the day, I think Oklahoma goes to the Final Four.

Another tough call in the Elite 8. But I see a Roy Williams storyline unfolding here. UNC is sick. But people will count Xavier out simply because they don’t know enough about them.

Kentucky sneaking as a four seed is always dangerous as well, but I don’t think they have enough this year to pull off the upset against UNC this year.

I will gladly agree with the masses and say that Virginia is the least deserving No. 1 seed in the field. The problem for their amazing defense is two words:

More so, an angered Tom Izzo who deserved the one seed and now gets to play the team that stole it for them to decide their Final Four fate. Who you taking?

And by the way, I agree that my own favorite team Syracuse being in this tourney over a team like Monmouth is a crime, but I do feel Cuse belonged and other teams should have been out in favor of Monmouth. That being said, if they beat Dayton I will be very surprised, there is just something missing in the composure of this team. 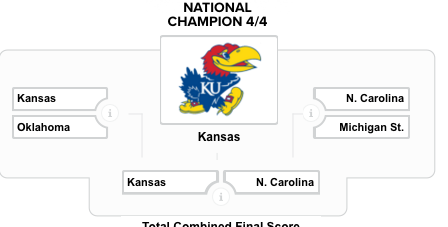 So there you have it. Kansas will be singing One Final Moment this season. Hopefully better than Chuck.