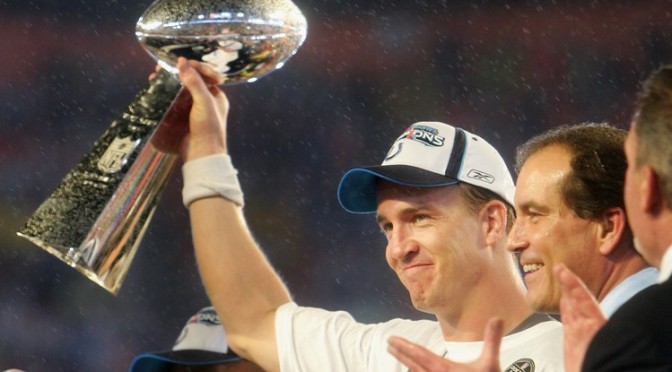 Super Bowl 50 is a mere five days — and 700 hours of pregame shows — away from kickoff. There is the very high likely hood that we may be seeing the greatest quarterback of all-time play in his final game.

The Super Bowl has rarely been kind to Peyton Manning. Heck, the playoffs have been a constant struggle throughout his 18-year career. I have said it 100 times before and I’ll say it a million more: no sport’s greatness is judged more by the rings on your finger than the NFL. Especially for a quarterback.

That’s why it was so important that Peyton at least got one under his belt.

There were a few things that stand out in that Super Bowl. I remember watching it in it’s entirety at Leopard Lounge, a club I worked at in Midtown Atlanta. Being a nightclub, they weren’t open on Sundays, so the owners closed the doors and we were able to watch it amongst friends on three big screen TVs. I also remember eating about 100 wings.

Anyway, one of the vivid memories of the this Super Bowl was rain. Lots and lots of rain. It still is the only Super Bowl to be played under such conditions. It was certainly a gloomy feeling, which is probably why I began to lose interest after Reggie Wayne‘s early 53-yard touchdown.

One of the lasting memories of this Super Bowl was the eerie resemblance it had to that year’s BCS National Championship Game. Ted Ginn, Jr. took the opening kickoff to the house for Ohio State, who eventually would lose to Florida in a landslide.

Devin Hester — who is likely the greatest return man in the history of the game — wasted little time showing what made him great on the biggest stage in the world. He too took the opening kickoff to the house. Like the Buckeyes, the Bears wouldn’t stand much of a chance against Peyton Manning’s Colts.

I also remember the hype around the fact that not only were we going to witness history because we would see the first African-American head coach win a Super Bowl. We would also see the first African-American head coach lose a Super Bowl. Tony Dungy would win, and his legacy would be secure. The simple truth is, although Lovie Smith lost, he somehow took a team that had Rex Grossman at quarterback to the Super Bowl. That’s a win in my book.

This was one of the season’s that Peyton and the Colts had to keep their pedal to the metal as they tried to play for that first round bye. Tony Dungy was notorious for resting his players — as early as week 15, even in a 14-0 season — when first round byes were in hand. He would take criticism for it on an annual basis, that perhaps this offense full of Hall of Famers like Manning, Marvin Harrison, Reggie Wayne, Jeff Saturday and maybe even Dallas Clark, were unsuccessful in the playoffs because they didn’t grind it out until the end.

They did that season. And look what happened.

Manning would honestly have a rather ho hum performance. He tossed the wet pigskin for 247 yards with one touchdown and one interception. He took home the Super Bowl MVP, but you could have made the argument that either running back truly deserved it. Dominic Rhodes ran for 113 yards and a touchdown, while Joseph Addai ran for 77 yards while catching ten passes for 66 more.

Oh, and Adam Vinatieri would kick three more field goals en route to his fourth Super Bowl ring in six years. You want to talk about the GOAT in the kicking department, I think you need to talk about that guy.

It wasn’t the most exciting Super Bowl of the 2000s by any means. It was probably one of the most boring. But it was highly significant on multiple levels. The two coaches involved of course will live etched in the annals of NFL history.

And so will Peyton because he got his ring.

One thought on “Countdown to Super Bowl 50: Peyton gets his ring”