It was the most unsuspecting season I can remember. The St. Louis Rams behind one of the greatest offensive arsenals in the history of the game, marched their way from a decade of mediocrity to Super Bowl Champion from the opening kickoff of that 1999 season. And it was all on the arm of a grocery bagger.

The Rams were atrocious in the 1990s. The end of the 1970s and most of the 80s saw the Los Angeles Rams become one of the more dominant teams in the NFC. The 90s were so bad, Los Angeles kicked them out.

But then the most electric team in NFL history captured the attention of the entire nation. The Greatest Show on Turf will go down as one of the most fun teams to watch and it started with a torn ACL in the preseason.

Had Trent Green been at the helms of this offense, who knows what would have happened, but instead, Green tore his ACL and Kurt Warner would have one of the greatest seasons an NFL quarterback has ever had.

What I remember most about this Super Bowl is that it was the first I was sidelined for as I watched it home in bed sick. I also remember thinking the lowly Tennessee Titans didn’t stand a chance.

Warner threw for 4,353 yards that season, with 41 touchdowns and 13 interceptions for a 109.2 quarterback rating. Marshall Faulk had one of the sickest seasons in history amassing 1,381 yards on the ground as well as 1,048 yards receiving while scoring 12 touchdowns. They led the NFL in yards, points, rushing defense and sacks. Even their defense was part of the action, as they scored seven touchdowns on the season themselves.

As the third quarter started, it appeared that I was right, the Titans trailed 16-0.

But Eddie George and the Titans came firing back with 16 unanswered points and the stage was set.

Warner nailed a 73-yard bomb to Isaac Bruce for the go ahead score and then this happened. 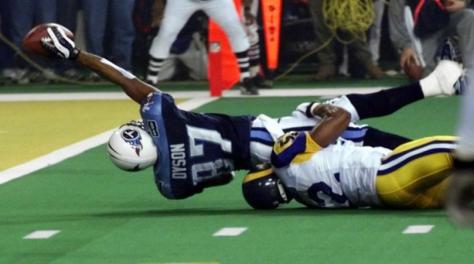 Dubbed “The Tackle” it was one of the most memorable plays in Super Bowl history. Mike Jones became a legend. Look how close the Titans were to tying this game… the only way you could possibly get closer to changing the course of Super Bowl history would be TO NOT HAND THE BALL OFF TO MARSHAWN LYNCH ON THE ONE YARD LINE.

Anyway, my takeaway from this Super Bowl, and I know it will be met with harsh criticism, is that one of the most overrated quarterbacks in NFL history was born. I love Kurt Warner, and I do think he had some great seasons — with 1999 being one of the greatest. But to put it in perspective Joe Flacco had one of the single greatest postseason runs in history. No one considers him an all-time great, do they?

Many argue each year that Warner is a Hall of Famer, but I don’t see it. Phil Simms and Ken Anderson both have more career yards passing than Warner, and deserve just as much Hall talk as Warner but it will never happen. Simms technically has a 2-0 Super Bowl record, plus he holds one of the most amazing Super Bowl records in history. How many of you think he deserves to be in the Hall?

Warner is the true definition of Cinderella Story, plus he is a great guy. You wanted to root for him, and for four years of his 12-year career, he gave fans ample reason to. But he had some of the sickest weapons ever at his disposal with one Hall of Famer already (Faulk) and two more likely coming (Bruce and Torry Holt). I’m not taking anything away from Warner, I just don’t know how much of an all-time great he is.

It’s the same reason I don’t rank Joe Montana as high as I do John Elway and Dan Marino when it comes to all-time greats. Montana was nothing short of amazing, but look what Steve Young did when he stepped into the same offense. He didn’t miss a beat, right? How bad have the Dolphins been since Marino retired? The word irrelevant comes to mind. And Marino had ZERO running game and good, but not GOAT wide receivers.

That being said, Warner did chuck it for 414 yards and two touchdowns on the world’s biggest stage and have one of the greatest Super Bowl’s ever. That team was exciting to watch, and two years later they would return to the big game. But that’s a story for another time.

One thought on “Countdown to Super Bowl 50: The Greatest Show on Turf”