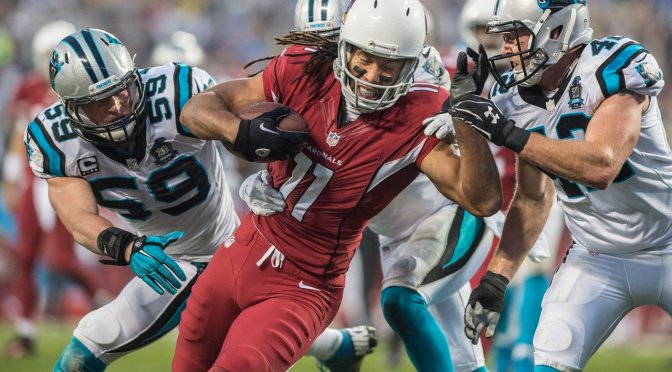 I can’t decide on this one, folks. I think Sunday evening’s game between the Carolina Panthers and the Arizona Cardinals could go either way. It’s not so easy to find an advantage on either side of the ball, so I wonder just who will represent the NFC in the Super Bowl this season.

Defense wins championships: It’s amazing how close these two defenses are. During the regular season, the Panthers allowed the sixth fewest points per game at 19.2. The Cardinals? The seventh least at 19.6.

The Cardinals were the better in least yards allowed per game, finishing fifth overall at 321.7. The Panthers? Sixth at 322.9.

If your looking for an edge, I guess it would come in the sack department. The Panthers had the sixth most in football with 44 with the Cardinals finishing 20th with 36. That could play into the Panthers favor with Palmer being a drop-back, pretty immobile quarterback. Jared Allen getting on the field could be a key, although he hasn’t had a sack in ten games.

The Cardinals have the best offense in football… at least statistically in 2015. Nobody put up more yards per game (408.3). Only one team scored more points per game than the Cardinals (30.6) did in the regular season.

That team? The Carolina Panthers who led the NFL at 31.2 points a game.

Last week, the Panthers jumped out and scored their typical 31 points against arguably the NFL’s best defense. Here’s the thing, however. They scored all 31 points in the first half. The Seahawks made adjustments, and shut out the Panthers in the second half.

The difference this week is that I believe the Cardinals have a more dynamic offense than the Seahawks. If the Panthers can’t solve their third down issues and extend drives, the Cardinals can come firing back from behind and take this game. We already know they can, we saw it last week in one of the greatest finales of a playoff game in NFL history.

So, like I said… I’m clueless. Maybe help me shed some light and vote!