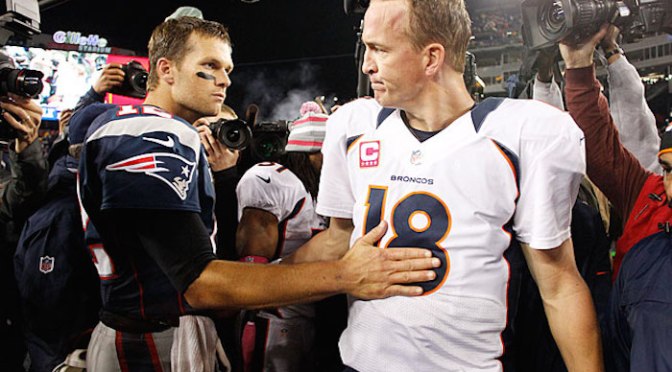 This was a peculiar year in the NFL. Officiating hit an all time low. Injuries to he NFL’s biggest stars were at an all time high. No one on the planet knows what a catch is. And Roger Goodell continues to digress in what was once a strong presence in the commissioner’s office.

Oh yea, and there is going to be NFL football in LA.

Oh, and oh yea, the greatest rivalry in sports is about to write out its final chapter.

It’s hard to find another two athletes who captured America’s interest like Tom Brady and Peyton Manning have. So many times when the two have faced off, it has often been a precursor to the NFL’s next champion.

I lived through pretty much the entire Magic Johnson and Larry Bird Era (I don’t recollect any of their college career, but I was alive for it). The way the two of those NBA legends became the face of the NBA in the 1980s and pretty much decided who the league champion would be fascinated the entire sports world.

But they were very different.

You see, in the 1978-79 season, Bird would lead his Indiana State Sycamores all the way to the finals where their Cinderella run would eventually end at the hands of the Michigan State Spartans. Bird swept nearly every award that season — the Wooden Award, the Naismith Award, the AP Player of the Year, the Sporting News Player of the Year and the Rupp Trophy — in one of the single greatest season’s in NCAA history. The only award he didn’t win was the NCAA Tournament Most Outstanding Player Award. That one was for Magic, who defeated Larry Legend in the finals and would create a personal rivalry before they even stepped on an NBA court.

Everyone knew the two were bound for greatness. The Celtics would snag Bird with the sixth overall pick in the ’78 draft, while the Lakers would grab Magic with the first overall pick in the ’79 draft. From 1980 to 1990, the new Showtime Lakers would appear in eight championships (winning five) while the Celtics would appear in five (winning three), including facing off against each other three times. Bird would win three MVPs over that span, while Magic grabbed two. They were advertised as the next NBA greats, and the delivered.

Manning and Brady aren’t anything like that. We all knew Manning, he was Archie Manning‘s son, so the hype machine was already in motion. Manning lost out in the Heisman in a super close vote to Charles Woodson, and would become the first overall pick when the Colts had to make the franchise altering decision between he or Ryan Leaf.

Brady? He was the 199th pick two years after Manning. His career collegiate stats were just a bit better than Manning’s senior year, near-Heisman campaign. This guy was not seen as the heir apparent to Drew Bledsoe (who many of us forget was heading towards Hall of Fame-type numbers), just a guy to keep the bench warm.

Lewis of course, was the Jets linebacker who hit Bledsoe so hard he nearly killed him. Brady would come in and change the course of Patriots history and Bledsoe would head north to Buffalo.

Since then, you can argue that the unsuspecting Brady and mega-hyped Manning have become the two single greatest quarterbacks to ever play the game. And this weekend, for a 17th time, we the fans get to see them go at it to see who gets a chance at a title.

Brady and Manning do have one thing that is comparable to the Magic and Bird rivalry. Both of their respective sports over the years have tried to make their fans believe that the second coming of their rivalries were here. Remember the LeBron and Melo comparisons? They even tried to hype up the Eli and Brady rivalry because of those two Super Bowls. Nothing will ever compare to them. NAH -THING.

The only regret that NFL fans will ever have in this rivalry is that one of the QBs was never in the NFC. Then we could have seen a Manning and Brady Super Bowl, much like the Magic and Bird Finals fans enamored. The quarterback is the single most important position in any sport, and the amount of rings a quarterback can win defines their greatness. If Manning and Brady would have had a couple Super Bowls against each other under their belt, we would have the clear cut best quarterback in the history of the game… and the ratings would have blown up the Nielson scale.

Brady currently owns the series, winning 11 of the 16 meetings. Neither have won on the other’s home turf in the playoffs, so maybe Manning gets to level out the series record this coming Sunday. Either way, no matter how much Manning’s talents have taken a step backwards this season, NFL fans couldn’t have asked for anything more.

Brady and Manning have squared off three times in the AFC Championship game. The first, in 2003, began the questions of Peyton’s playoff persona as the Pats picked him off four times en route to their second Super Bowl in three years. The next two AFC Championships would see Manning rise triumphant (2007 with the Colts and 2013 with the Broncos). You would never think it with all the Brady hype and love, but Peyton has indeed been the better in the AFC Championship.

It’s the whole getting there part that has always been Peyton’s thorn in his side.

And Sunday will most likely be their final matchup.

The only person denying that Peyton Manning is on his final leg is Manning himself. His throws are wobbly, they don’t go very far and he is clearly a liability. Win or lose, Manning should ride off into the sunset with his head held high after this season. He was able to come back and compete on the field, which many felt we would never see again. That right there is a victory.

Brady? The only reason he would retire would be because he is bored of winning. Brady bounced back — if you can really call it that — in his age-38 season to have one of the best years of his career. It becomes an even more remarkable feat when you look at the injuries on offense he dealt with as well as a defense that was inferior to last year’s Super Bowl champions.

But Brady kept winning. And so did Peyton. And this Sunday, no matter how infuriating the NFL season seemed this past season, we get to watch the greatest rivalry go down one last time.

And all is right in the NFL.