Any time there is an All Star or All Pro selection, there are going to be names left off the list. Sometimes those forgotten players are so ridiculous, that you often wonder if they were left off on purpose to cause a stir amongst the media and fans. This year, the NFL did a pretty solid job in naming their Pro Bowl teams, but that’s not to say some choice people were left off the list.

I know what you’re saying. Who cares? It’s the Pro Bowl, nobody watches anyway. Part of that is true, but if you have actually watched a Pro Bowl game, you will see that most of the starting players, whether it is due to a long playoff run or simply being out of gas after a taxing season, don’t even make it to the game. So, most of the snubs actually wind up playing. That’s why the initial Pro Bowl first team selection is actually important. You know you weren’t second choice.

So, who are some of the choices I felt were overlooked? 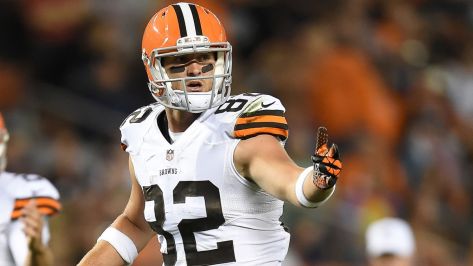 This was the most glaring player left off the roster in my opinion. The problem with the tight end position is that only four get selected, which limits the selection process at a deep position.

Rob Gronkowski is a layup as he is still one of the most exciting players to watch in the NFL. Greg Olsen is having his best year in the NFL, and that’s an impressive statement. When the Panthers receiving corps looked thin, they asked Olsen to become the leader of the offense, and he has accepted the roll posting a career high in yards (1048) and is one off his career high in TDs (8).

Tyler Eifert was a touchdown machine. Leading all tight ends with 12 scores, Eifert really did little elsewhere on the field. He hasn’t had over 55 yards receiving in seven weeks and you can argue those three big drops in the Texans game cost them the game. Still, people love touchdowns, and Eifert provided that.

Travis Kelce has been a reliable target for Alex Smith in this remarkable eight game run by the Chiefs. They are sick. But they have also been led by a running game and the reemergence of Jeremy Maclin.

Let’s beak it down:

The thing about Walker and Barnidge is you can make the argument that they were the only legitimate offensive threat throughout the course of the season for their respective teams. Barnidge has done it with whichever mediocre quarterback they throw out there, and while Mark Sanchez made a Butt Fumble famous, Barnidge went out a caught a touchdown with his. The problem is, that no matter how big their offensive output was, their teams stunk. And that left both on the outside looking in.

Considering that Olsen and Gronk seem to be heading for a long playoff run, chances are Walker and Barnidge will both be in Hawaii.

When this guy plays, I feel like he should always be an All Pro. He is that good. The problem, I assume, is that just how good is the leader of a defense for a team with a losing record?

That’s not really fair, because the Cowboys woes this season have come from ineffectiveness at the quarterback position. The defense has played well — some may argue above expectations — as the No. 10 ranked defense in the NFL. You can bet that Lee is the driving force behind that.

The Jaguars offense as a whole is having a breakout season as Blake Bortles continues to mature into a legitimate NFL quarterback. Robinson has become his favorite weapon.

Both he and Allen Hurns — the A-Team — have combined to become one of the league’s most fearsome wide receiver combos. They are fun to watch, and as a team with Julius Thomas at tight end and T.J. Yeldon and Denard Robinson in the backfield gels together, they will become a force in which to be reckoned.

Robinson currently is tied for the league lead in receiving touchdowns with 13 and has piled on 1,141 yards. Those are All Pro numbers if you ask me. The question is, who can he replace?

The NFL has become so pass happy that it is tough to figure out which of the eight receivers chosen don’t deserve a ticket to Hawaii. Two veterans, however –both of whom I love to watch — have had seasons right around where Robinson is, and their names alone may have secured their Pro Bowl spot.

Whereas touchdowns seemingly got Eifert the nod over statistically better all-around tight ends, here it seems to not have the same effect. It’s hard to argue against Fitz, who is having a remarkable career renaissance after two down years made it seem like he was on the decline. Megatron, however, could realistically be the odd man out here. You could make a very strong case that A-Rob is more deserving and I don’t think you would have much resistance.

This one was tough, because every running back that made the roster in Hawaii deserved it. It just seems like Ivory did as well and he was the victim of a lack of roster space.

Ivory is five yards off the AFC rushing title (Latavius Murray leads 956 to 951) and has score seven touchdowns. More importantly, he has helped lead the Jets to the No. 10 overall offense in the NFL. Yea, Ryan Fitzpatrick and company have the 10th best offense in football.

I could see people want to leave Jonathan Stewart off the list, simply because he finally became the lead dog and hasn’t had the big blow-up season. But he has paced a 13-0 offense. I think I would personally have given Ivory the nod over LeSean McCoy. McCoy has had a good season, but it seemed like at one point, everyone kind of thought Chip Kelly may have been right about him after a slow start.

There were definitely more snubs than this, but these were the four that stood out most to me. Who do you think should be there that is not?