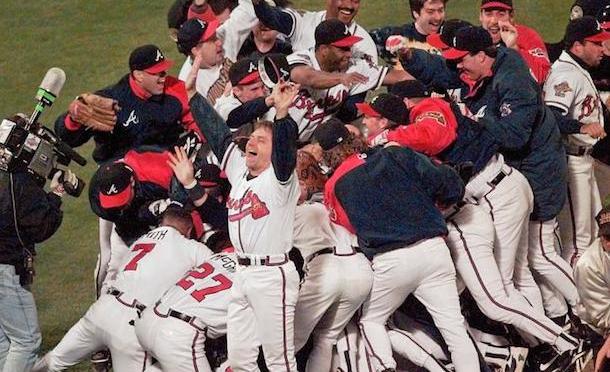 Can you believe that it was 20 years ago that the Atlanta Braves won their World Series against the Cleveland Indians? 20 years. The Braves these days have become more known for what they are trading away than what they have on their big league roster, but that ’95 team? That was one for the ages. I feel like it doesn’t get its just due and has become one of the great forgotten champions.

That team was silly good. It was stacked with Hall of Famers and All Stars up and down the roster. They had wrapped up their fourth consecutive division title that would end as an historic 14-year run. They romped their way through the playoffs, downing the Rockies three games to one before sweeping the Reds in the NLCS. They then defeated an Indians team that was offensively loaded, 4-2.

But when you talk about great World Series Champions of the 90s, it seems that 95 squad is often passed over, doesn’t it?

Everyone remembers Joe Carter‘s blast off of the Wild Thing as Toronto won consecutive World Series. Everyone remembers the 1998 New York Yankees team that very well may have been one of the most dominant squads ever assembled. Heck, more people remember the 1997 Fall Classic that saw a a Florida Marlins have a fire sale seemingly days after raising the crown.

The ’95 Braves? An afterthought.

They were managed of course by Hall of Fame manager Bobby Cox. It was the Braves first National League East title (technically, since 1994 ended with a strike, it was the first official “new” NL East title) and first of 11 straight.

He led them to a .625 winning percentage, tallying 90 wins in a season that started a few weeks later as the last of the ’94 strike issues were resolved. How did they win those games?

The top end of the rotation was anchored by three Hall of Famers. Can you tell me any rotation in recent history that can boast that kind of accolade? I certainly can’t. Greg Maddux — winner of 355 career games — was the ace of the staff. He would go 19-2 that season, posting a 1.63 ERA and a 0.811 WHIP. I literally just laughed at how ridiculous those numbers are in the modern era of baseball. He would end the season by winning his fourth consecutive Cy Young Award.

Tom Glavine — also a 300 Club member — and John Smoltz — who is the only player in MLB history to record 200 wins and 150 saves — followed Maddux in the rotation. So to review: three starting pitchers, three Hall of Fame plaques, seven Cy Young Awards. Pretty impressive, right?

Well, there’s more. The offense wasn’t too shabby. They had this rookie third baseman named Larry that would blast 23 home runs, but was only scratching the surface of the greatness he would achieve. Years later, that rookie named Chipper Jones would retire as one of the greatest switch hitters ever to play the game. I have said before that I think Chipper is a first ballot Hall of Famer. I don’t know if that will be true because he never reached the “magic numbers”, but his legacy as a switch hitter and offensive leader of a 14-time division champion can’t be ignored. One day in the near future, he will be the FIFTH member of that team to be enshrined in Cooperstown. Quick, find me another team that has that many plaques in recent memory.

The first baseman was no slouch either. How do you not love the Crime Dog? Fred McGriff was awesome and finished his career seven home runs shy of certain Hall of Fame induction (his 493 are tied with Lou Gehrig… just sayin’, not shabby company). McGriff is one of a three players to lead both the NL and AL in home runs over the course of his career. He also has homered in more MLB stadiums than all but two players in the history of the game.

McGriff came to Atlanta and his scorching hot bat lit the city on fire. Literally. The press box at Fulton County Stadium caught on fire the first day that McGriff suited up in a Braves uniform. How nuts is that? Had McGriff reached that 500th home run, he was Cooperstown bound, and would have been the SIXTH Braves Hall of Famer on that team.

I haven’t even mentioned Marquis Grissom or David Justice yet. I didn’t even talk about a bullpen that saw Mark Wohlers, Greg McMichael and Brad Clontz totally shut things down all season. And I haven’t even mentioned the man all the ladies loved to cheer for, Mr. Javy Lopez. I mean the dude was one of the premier hitting catchers in the game.

The team was loaded and the team was good. And they won. Which was something none of the other 13 division title teams could ever do. That’s probably why they are so often forgotten. Yea, they won the title, but hey, they had to win one eventually, right?

What if Jack Morris didn’t pitch a 10-inning complete game? What if Jim Leyritz didn’t go yard? What if Sterling Hitchcock didn’t pitch the best 10 innings of his life?

You could argue that the Braves were one game away from being one of the greatest teams in the history of the game, but instead, they became the guys that were good enough to terrorize the NL, but not quite good enough to rule the world.

And because of that, the 1995 Braves — one of the sickest teams ever assembled — is one of the most under appreciated of its time.

2 thoughts on “The 1995 Atlanta Braves: the most under appreciated MLB champion?”