This past July 4th weekend, the fiancé and I took in a Hickory Crawdads game. The Crawdads play in Hickory, North Carolina and are the Single-A affiliate of the Texas Rangers. Jose Bautista, the American League Captain in last night’s Home Run Derby, and reigning National League MVP Andrew McCutchen are two of Hickory’s most famous alumni. As soon as we paid the three dollars to park, I immediately remembered how much I love MiLB.

Minor league baseball truly wants you to come to the games. They aren’t money making conglomerates like the new Yankees Stadium, which we also stopped at on our road trip. Sometimes, I feel like they don’t care if they even make a dime. They are owned by big league ball clubs and every last player that takes the field is giving it everything they got in hopes of being noticed. We were in for a real treat that night as Dario Alvarez was pitching for the Savannah Sand Gnats. While I understand 99% of you just said who?, the other 1 % knows that he is one of the best pitchers Single-A has to offer. This season Alvarez is 6-0 with a 0.98 ERA, striking out 89 batters while only walking 13 over 55 innings. That night in Hickory he was dealing, allowing no earned runs while striking out eight.

I have been to a few minor league ball games this season and watch at least a little bit every night as head of the Minor League Coverage team at Yanks Go Yard. I know I enjoy it more than the average person, but you really should take in a minor league game some time. There are plenty of reasons for everyone to enjoy it.

Minor league baseball teams are in the most obscure places with some of the most obscure names. I don’t even know where Kannapolis is, but I would certainly be a fan of the Intimidators. Tell me you wouldn’t want to get decked out in your favorite pirate costume (you know you have one) and take in a Bradenton Marauder game down in Florida. If I saw that the Rancho Cucamonga Quakes were facing off against the Modesto Nuts, I would go to the game without even needing to know what sport was being played! I’m sure Paris Hilton is the biggest fan of the El Paso Chihuahuas, and you know that Homer Simpson has season tickets to the Albuquerque Isotopes.

Sure, the Yankees have their grounds keepers do a YMCA for you, and the Atlanta Braves have the Home Depot Tool Race, but that stuff doesn’t compare to the on-field antics at minor league baseball parks. Look at this for example:

What you’re looking at here is a young man dressed as the Tooth Fairy. His prime responsibility was to run out onto L.P. Frans Stadium’s field, home of the Crawdads, and keep the bases pearly white. At first I thought it was a college kid being initiated into some fraternity, but then I remembered I’m in a minor league baseball stadium and this is actually pretty normal.

The Lehigh Valley Iron Pigs have a feature in their stadium that is second to no other: they have urinal video games people. That’s right, urinal video games. If you can put in the back of your mind the amount of germs that you are taking in (or if you are simply drunk enough to not comprehend it) you can play video games right there in front of you while you drain your Richmond Flying Squirrel. One of my favorite promotions that I have ever heard of happened last season at the Cleveland Indians Single-A Mahoning Valley Scrappers’ game: on All You Can Eat Wednesday they handed out free liposuction! I couldn’t even make that up if I tried! Several teams hold musical chair contests right on the field. Hickory allows one lucky fan to suit up in a sumo suit and tackle the mascots!

Then you have the specials. There are nights in minor league ball parks you can go and get hammered for ten dollars. No lie. You can thank the Asheville Tourists for that one. They started the whole Thirsty Thursdays idea, and you can now go to many minor league ballparks on a beautiful summer Thursday night and get beers for a whole dollar. Think about that: beers at a baseball game for one dollar. You know what you can get at a Minnesota Twins game for a dollar? Nothing at all, and they are essentially a minor league team!  On top of it, while you are waiting on line for that dollar beer, why don’t you take a go on the moon jump right next to the concessions line? 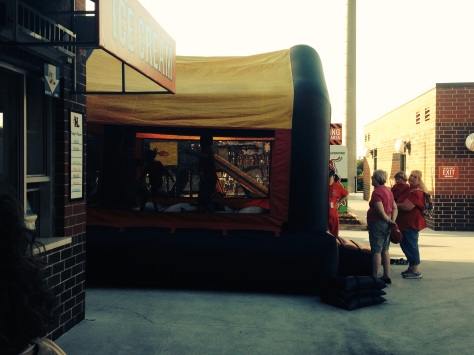 While at the Crawdads game, I even noticed they had Unemployment Night every Wednesday. If you show your unemployment ID at a Wednesday night game, you get four free tickets. Like I said, minor league teams really want you to be there.

Most minor league stadiums are no bigger than a college ball park, but that coziness makes it that much more enjoyable. I remember I went to a Portland Beavers game, and we were sitting at high top tables drinking beers literally in right field foul territory. We were on the field and I think the tickets cost six dollars.

You can go to a minor league baseball game and get prime seating and an enjoyable night out for under $25 if you really wanted to. You can barely do a movie for that these days! If a minor league stadium holds more than 5,000 people, you are at an enormous stadium. If they are charging over $10 or $12 for a ticket, something monumental is happening. Hell, the night we went to the game the Crawdads let you in for FREE if you were wearing a red shirt. The entire stadium was a sea of red, except for me, my fiancé, her younger sister, her bridesmaid, and my future father-in-law, all of whom unfortunately had no idea that the promotion was going on that evening. If you don’t like baseball, you can still go get drunk or eat until your stomach bursts for peanuts, and the game (unlike at the major league level) will be over in less time than a $14 movie. Plus, they always have cool stuff like this:

I hope one day you get to go out and take in a game. Anywhere that you live, there is probably a minor league ball park no less than twenty minutes away. I mean, even Arkansas has a minor league team, and what the hell is in Arkansas? I know for sure I can’t wait for Monday night when I get to go see the Scranton/Wilkes-Barre RailRiders face off against the Gwinnett Braves at CoolRay Field on Kids Eat Free Night. I am 90 percent certain with the ever so strict rules at minor league ball parks that I will be under 12 years of age that night.