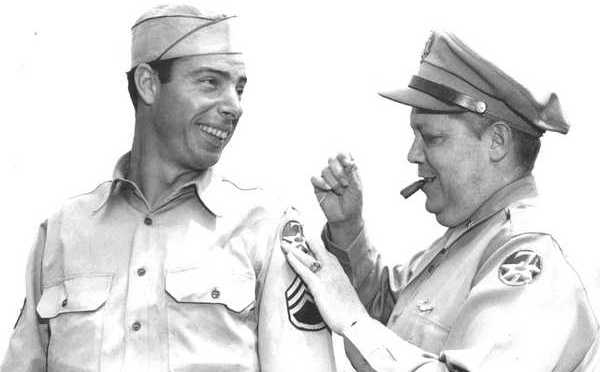 Happy Memorial Day, America. It’s a time for barbecues, heading to the beach, and enjoying a long weekend with family and friends. There is usually a ton of booze involved and maybe you sneak in a two minute glance of one of the most famous non-stop left turns ever in the 98th running of the Indy 500. It is also a time to remember… hence the clever Memorial Day tag.

The sports world has long been filled with athletes who remember that, although sports are entertaining and indeed a job, they are also just a game. Endless amounts of athletes have put their careers on hold to serve this country. While some of us spend this weekend celebrating relatives or friends who have served, lets take a look at some of the more memorable athletes to put America above their stats and illustrious careers.

THE TOP 15 ATHLETES TO REPRESENT THE US MILITARY

Honorable mention: Let me first make it clear. Anyone who served, especially back in WWI and WWII, deserves to be considered both a great athlete and American. It is simply too hard to make a list that entails every last athlete that has hung out with Uncle Sam. Joe DiMaggio, Willie Mays, Hank Bauer, Stan Musial, and Bill Bradley all served in this nations’ military in one extent or the other. The list below is 15 people that changed sports forever, but again, that doesn’t lessen what other athletes before or after them have done. Take for example this extensive list of major league baseball players who served in WWII. Some made my list, some are Hall of Famers, and some (like Howard DeMartini, Hank Nowak, Franklin Shultz, Ardys Keller, Bob Neighbors, Lefty Brewer, Elmer Gedeon, and Jim Tremble) never made it home. Let’s not forget those like pro golfer and Happy Gilmore star Lee Trevino who served in the Marines. Hurler Christy Matthewson and legendary pugilist Jack Dempsey both served, but it was after their careers were over. On the opposite end, all-time greats like Yogi Berra were there on D-Day, but hadn’t played a lick of ball yet, just like Dizzy Dean and Tom Seaver. Whether or not you agreed with him as a Governor, Jesse “The Body” Ventura was a Navy SEAL in Vietnam, so he deserves some love on this weekend. Rocky Marciano went 44-0 as a Word Champion boxer, knocking out 43 of his opponents, but he knocked out a few others before hand in the Army. Roberto Clemente, one of the best known humanitarians of his generation, was in the Marine Corps Reserves. Lastly, that ornery bastard Ty Cobb deserves a mention. Cobb only served 90 days in the US Armed Forces after being exposed to mustard gas in France.

To be perfectly honest, I didn’t even know who Coleman was when I started this list, but after doing research, I discovered that Coleman has the dubious honor of being the only active major league ball player to face combat in two major wars: World War I and The Korean War. In between, he won four World Series rings as a second baseman for the New York Yankees. When baseball was done and the world was at peace, Coleman turned to broadcasting. As the voice of the San Diego Padres, he won the 2005 Ford C. Frick Award for Broadcasting from the Hall of Fame and in 2007 was inducted into the National Radio Hall of Fame. He was immortalized with a statue outside of Petco Park, joining the great Tony Gwynn as the only two with that honor. Sadly, Coleman passed this past January.

I would say you have made a pretty big contribution to American sports when the award for the greatest college hoopster in the nation is named after you. He is legendary for his coaching, so people often forget he won a National Championship as a player with Purdue and was a consensus three time All-American. Of course, Wooden made his claim to fame as head coach at UCLA where he won 11 championships in 13 years, had three undefeated seasons, including two in a row, and an 88-game winning streak. Sandwiched in between his playing and coaching career, Wooden rose to lieutenant in the Navy after he enrolled in 1942. 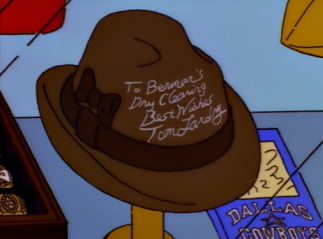 How could the head coach of “America’s Team” not get the nod on Memorial Day? Landry was known for two thing: his legendary hat and creating the 4-3 defense. Now all you Madden gamers who loved rushing Reggie White on the outside back in the day know who to thank. He was a pretty decent ball player with the New York Giants and one of the greatest coaches ever, taking the Cowboys to 12 NFL or NFC Championships in a 17-year run. Landry also flew 30 missions in the Air Force during WWII. We almost never had the chance to know Landry as a coach as he survived a crash landing in one mission. Cowboys fans are certainly thankful Landry was as handy with the controls as he was with a defense.

If you watch the Frozen Four, you know the best collegiate hockey player each year wins the Hobey Baker Award. What you may not know is he is the only collegiate athlete to ever make both the College Football and College Hockey Hall of Fame. Winning one football and two hockey championships with Princeton, sports was not enough for Baker. He enlisted in the Army for WWI and served as a pilot, earning awards for his valor. He tragically died too soon a few years after the war in a test flight crash.

Ford capped of his 1951 Rookie of the Year campaign by enrolling in the Army and missing the next two seasons fighting in the Korean War. He would go on to win a Cy Young Award and six World Series titles with the New York Yankees. Ford led the AL in wins three times and was the All-Time Yankees wins leader until Andy Pettitte recently broke his record. Who knows how many he could have had if he hadn’t served.

Although he never had to fight, The Admiral is one of the most known Midshipmen of all-time. Robinson was a two time All-American and won the Naismith and Wooden Awards in his senior season. He served his two years in the Navy and joined the San Antonio Spurs, where he would turn one of the sorriest NBA franchises into one of the greatest of all time. He would later serve his country again as part of the iconic Dream Team taking home the gold in the ’92 Olympics.

Talk about wanting to serve. Greenberg originally enlisted for the Army but was rejected on account of his flat feet. He would re-enroll and would eventually be drafted and fight in WWII. After he was honorably discharged for being 28 years old, Greenberg re-enlisted AGAIN to the Army Air Forces, this time serving in the East. Sandwiched around his military combat, Greenberg led baseball in home runs and RBI four times over 12 years.

The Midshipmen put out some amazing athletes. Staubach won the Heisman Trophy in 1963 and would go on to fight in Vietnam. He resigned his commission to come back stateside and lead the Cowboys, under the tutelage of fellow Top 15-er Tom Landry, to legendary heights. Staubach would lead the Cowboys to two championships and become a six-time All-Pro.

I remember Donovan as a funny man in his appearances on late night talk shows, but he was one heck of a football player. Donovan served a few years at sea for the US Marines Corps in WWII. He was stationed on the USS San Jacinton alongside fellow Marine George H.W. Bush. Donovan would come back and lead the Colts to back-to-back Championships. He is an NFL Hall of Famer and the first pro footballer to be elected into the Marine Corps Hall of Fame.

Bleier played one season in the NFL for the Pittsburgh Steelers before serving in the Army in Vietnam. While in Vietnam, his squadron was ambushed and Bleier severely injured his leg from flying shrapnel. Doctors told him he would never play again. Bleier told them they were wrong, becoming an integral part of the Steelers late 70s dynasty winning four Super Bowls to go along with his Bronze Star and Purple Heart.

Jones retired with only nine wins in his golf career, but seven of them were majors. Four of his seven majors came in 1930 alone when he swept the big tournaments that season. He also purchased this little lot of land that would go on to become Augusta National and the home of The Masters since 1934 aside from three years. As a US Army Air Force officer, Jones used Augusta National to herd cattle and turkeys to support the war at home. 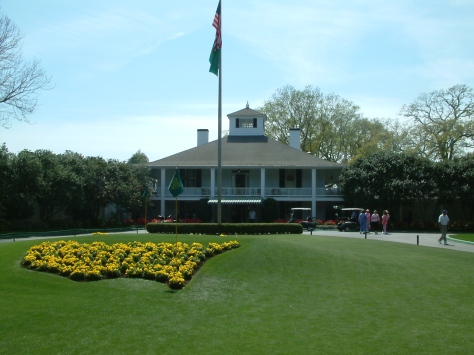 What didn’t this guy do? Known for breaking down segregation in baseball, he was at it in the military long before he was with the Dodgers. When ordered by a superior officer in the Army to move to the back of an unsegregated Army bus, Robinson refused and would be later court marshaled for the event. He would later be acquitted and earn an honorable discharge, turning his focus to baseball. The rest is history: The Rookie of the Year Award is named after him and no other baseball player will ever where his number 42 again.

Louis would enlist in the Army as a private and leave as a Sergeant. During his time, he helped others begin to bring an end to segregation in our Armed Forces. Perhaps the greatest fighter of all time, Louis held the World Heavyweight Title from 1937 to 1949 defending his title 26 times over that span. Louis also became the first African-American to break the color barrier in the PGA when he participated in a 1952 tournament. 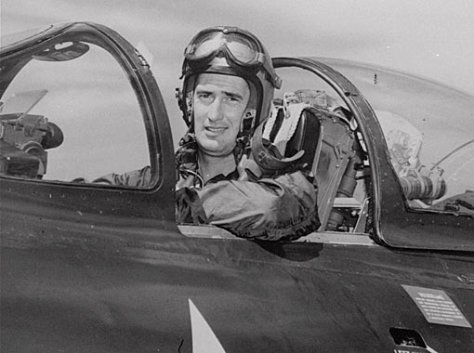 The Splendid Splinter is in the argument as one of the greatest baseball players to ever play the game. He would serve as a flight instructor during World War II for the Marines and return to active duty for the Korean War. Whereas Williams was stateside during his first call to the Armed Forces, he flew in 39 missions his second time around. Despite missing almost five season to military service, Williams was the last person to bat .400, won TWO Triple Crowns, two MVP awards, and retired with the all time highest on base percentage of any player. Unfortunately for Williams (but not so much to us Yankee fans), the only thing Williams didn’t achieve in his illustrious career was a World Series victory.

Is it cliche? Sure. But it was different for Tillman. Unlike it was for most of the other heroes on this list, there was no draft or requirement to serve in the Armed Forces during wartime. Despite being one of the premier safeties in the NFL, Tillman enlisted in the Army without hesitation after the attacks of September 11th. He would become an Army Ranger and eventually be killed at the hands of friendly fire. Tillman joined the Buffalo Bills’ Bob Kalsu (Vietnam) as the only NFL players to be killed in action. His number was retired by the Arizona Cardinals and the ASU Sun Devils.